Monroe Township is the largest in the county and is named after President James Monroe.  According to the 1880 history of the county, small groups of Native Americans were the only ones to live in Monroe Township up to 1831.  In 1830, the first two roads through the township were laid out: the Indianapolis-Fort Wayne Trace and the Shelbyville-Fort Wayne Trace.  They were made passable the following year.  In the spring of  1831, Micajah Chamness  arrived as the first white settler (along with George Marsh) to what is now the Alexandria area.  He came with his family from North Carolina.   The first to build a cabin, enter and farm the land, Mr. Chamness owned the west half of the northwest quarter of section 19 and the east half of the northeast quarter of section 24.  This latter parcel is the location for present-day Alexandria. Micajah was a pioneer "mover and shaker."  The Chamness cabin built along Pipe Creek became the center for early settlers' concerns and community affairs.  It was here that the first church of the township was organized, the petition for township recognition was written, the concern for a town site was discussed, and the first township elections were held in April 1836.

As to the first church in the township, the one started in the Chamness log cabin is given credit as being the "oldest continuing congregation in the county."  According to Kay Kinnaman, writing for the January 1991 edition of the magazine Madison County Monthly, Micajah volunteered his log home as the meeting place for worshipers soon after settling.  In 1835, congregants  built a log church nearby at the corner of West and Berry streets, and this structure served for almost twenty years.  By 1854, membership had grown, and a "finished lumber building" was constructed at the same location.  The future would see further improved accommodations, and the Alexandria Christian Church continues its ministry to this day on the very corner where Micajah and other pioneer settlers established their house of worship over 150 years ago.

Micajah Chamness came to the Madison County frontier with an extensive family.  Those members who did not settle with him in Monroe Township helped settle Pipe Creek Township to the west.  Micajah was born in 1779, lived to be sixty-one years old, and died in 1840.  He and his son, also named Micajah, are listed as buried in the Carver Cemetery in Boone Township.

After Monroe Township was pioneered by the Chamnesses, James, Morgan, and Annon James settled on Little Pipe Creek just south of Alexandria.  James James, about 1834, built the first saw and grist mill in the area on Pipe Creek one mile west of Alexandria.  In the next few years, Stephen Norris, Thornberry Moffitt, Jesse Vermillion, and Barnabas Maynard and their families arrived to homestead in the area.  (For more on the Vermillion and Maynard families, go to the Holson Cemetery page.).

The township trading point in those early years was Alexandria.  Alexandria was actually started by Col. Nineveh Berry in 1836 when he purchased, as an agent for Conner and Stephenson, the parcel mentioned above from Micajah Chamness.  Since the colonel was also the county surveyor, he proceeded on June 3, 1836, to lay out the town on the north bank of Pipe Creek.  On the following day, he sold a large number of Alexandria's lots for $10 to $53.  Col. Berry erected a log cabin on the corner of what is now Harrison and Berry streets.  As an agent for Conner and Stephenson, he stocked the cabin with general merchandise and so opened the first store in Monroe Township.  (For more on Nineveh Berry, go to the West Maplewood Cemetery page.)  As to the name of "Alexandria," two popular, related theories hold that the town was named after the ancient city of Alexandria in Egypt or, like this Egyptian city, was named after Alexander the Great.

A prominent early developer in Alexandria was David Pickard.  Mr. Pickard was from Maine and arrived near Alexandria about 1834. He was the first postmaster of the town and was elected in 1836 as the first justice of the peace in the township. Pickard opened the first hotel in 1838 on the corner of Harrison and Berry streets.  He built the first schoolhouse on lot 5, block 8  during 1839.  David Pickard must have felt that education was important and evidently started a trend because, as an interesting note, the 1880 History of Madison County, Indiana states proudly that as of that year there were "fifteen comfortable well-seated houses in the township in which public schools are kept up from six to nine months each year."  David Pickard is buried at the Chaplin Cemetery.

In the notch or "dog leg" of the township's western border is the village of Orestes.  The site of Orestes was first a Delaware village in the opening decades of the 19th century.  According to local folk history, this branch of the Delaware included the famous Chief Pipe for whom Pipe Creek is named.  Pipe was a war chief and activist, siding with the British during the War of 1812.  His Delaware name was Tahunquecoppi meaning "Tobacco Pipe," and he was also referred to as Captain Pipe for his military involvement.  He was born in the mid 1700s and died around 1818.  He died, according to the local story, in his last Delaware village, i.e. Orestes, and is buried there.

Perhaps Chief Pipe chose this site for his remaining days because of the white oak tree that grows there.  Pictured below, this ancient oak was a landmark along a well-established Native American trail that ran southwest to northeast through the state.  Later, pioneers used the tree to help guide them along the Fort Wayne Trace.  As the plaque from the Madison County Historical Society states, "Since about 1670 this oak has been a landmark for a Delaware Indian Trail, for the Fort Wayne Trace, for the village of Orestes, and for God."  Along with the MCHS plaque, pictured below right, this white oak has two other markers in front of it.  The Indiana Arborist Association sign commends " those who had the vision and foresight to preserve" this tree.  The joint marker from the international and national arborist organizations recognizes this oak "as having been alive during the American Revolutionary Period."  The stories this ancient tree could tell!

Around 1876, Nathan Lowry owned the land once inhabited by the Delaware and established a train station on their village site for the Lake Erie & Western Railroad.  At first, he named the point Lowry Station, and it appears as such on the 1876 plat map below, surrounded by his land.  Later, according to one theory, he changed the name to Orestes, honoring the Greek character in Aeschylus's play of the same name.  If this is the case, then Mr. Lowry was, indeed, very well read.  Nathan Lowry, 1826-1880, is buried at the Lily Creek Cemetery.

Population for Orestes increased in the last decades of the 19th century when successful glass and tile factories were located there and declined when the gas-boom ended.  However, in the later 20th century, interests in the little town picked up again when the Red Gold Tomato Company built offices, distribution plants, and warehouses on the north edge of what used to be a Native American village.  While justifiably proud of their famous white oak, residents of Orestes also identify with the company's eye-catching semi-tractor trailers which traverse the Midwest.  The trailers are painted sunny yellow with huge, vivid red tomatoes and twining green vines.

It should also be noted that from Orestes came one of Madison County's most prolific historian in the 20th century--Raymond Davis, whose research has been used at this web site and whose books can be found in area libraries. 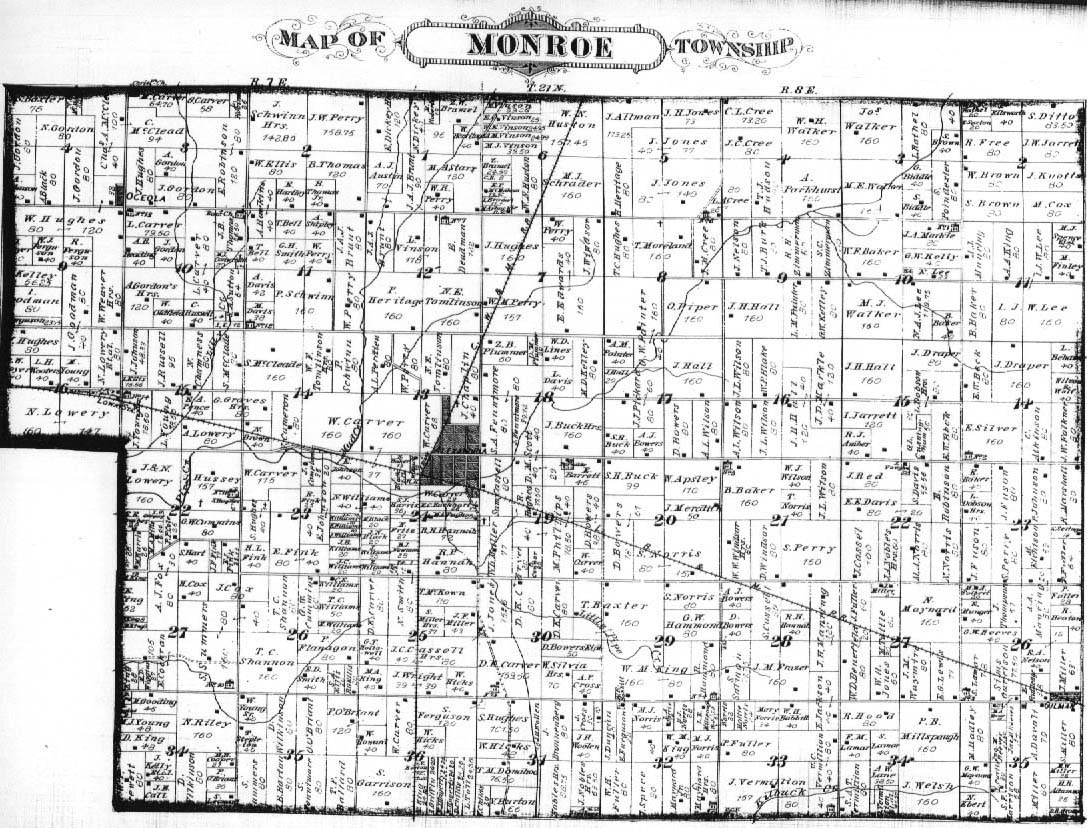