The Lily Creek Cemetery once surrounded one of the earliest churches in Monroe Township, the Lily Creek Christian Church organized in 1831 by area pioneers including Micajah Chamness, Sr., the first to enter the land that is now Alexandria.  Church member, Mrs. Heritage, a granddaughter of Micajah, was interviewed in the early 20th century:

"They [the congregation] held meetings before the Lily Creek Church was built.  They met from house to house.  You know they did not have tables in those days.  They took a chair and turned it upside down and placed a Bible on it to read the scripture.  They met at the homes of Amelia Jackson's, Leah Stroud's and James Ellis...After the meeting they all shook hands and asked their friends home to dinner.

When enough money was raised and volunteers enlisted, church members built in 1840 a log house of worship in the middle of the present site of the cemetery.   Evidently, from the death dates on several gravestones, the ground was used for burials before the log church was built.  Infant Hiron Cole died on February 21, 1839, less than two months old, and adult Susan Gorden was probably one of the earliest burials.  She died in 1834 at fifty-four years of age.  Perhaps, the owner of the land had already donated a portion to be used as a neighborhood graveyard.  Mrs. Heritage continues:

"Why, I can remember the first time I went to the Lily Creek Christian Church [building].  I was three years old.  Now this was in 1844.  My father [Micajah Chamness, Jr.] took me, and it was my grandmother's funeral, and Daniel Franklin preached the funeral sermon.  I know about my...grandmother... It was very lonely here for my grandmother, and for three years she saw no white person besides her family.  The Indians...were very friendly however."

The congregation steadily grew and in 1871 built a frame church more than a mile north of the cemetery.  By 1880, the number of members had swelled to over 100.  The cemetery also continued to grow, filling in where the log church once stood.  Families, represented here who settled on the northwest sections of Monroe Township, have the names of Gorden, Ellis, Davis, Black, Sutton, Oldfield, and Young.

Among these early settlers is an interesting area developer, Nathan Lowry, who died in 1880 at fifty-four years old.  In 1876, Mr. Lowry owned the land where Chief Pipe's Delaware village had, according to tradition, been located.  Perhaps capitalizing on the spot's fame, Nathan established a station as a point west of Alexandria for the Lake Erie & Western Railroad.  At first he named the little town Lowry Station, and it appears on the 1876 plat map for the township as such.  However, shortly after that, the name was changed to Orestes.  There are two theories as to the origin of the town's name.  One tale says that the name honors Orestes McMahan, a local farmer.  Another says that Lowry, himself, renamed the village after the Greek character Orestes, son of Agamemnon, in Aeschylus's play Oresteia.  If the latter is the truth, then Mr. Lowry was indeed extremely well-read for his time.  (For more on Orestes, go to the Monroe Township page; for more on Chief Pipe, go to the Pipe Creek Township page.)

"...it is probably worth noting that the cemetery is located on the property of Micajah W. Jackson, which he had patented on 15 Mar 1837 while he was still residing in Fayette County, Indiana (suggesting that he had likely donated a small part of it for the church and cemetery).  That only makes sense, given than his widow Amelia and daughter Caroline Elizabeth (Jackson) Ellis were charter members [of the Lily Creek Christian Church] and are buried there, as are two of his sons, who are found in the same household as Amelia in the 1850 Census." 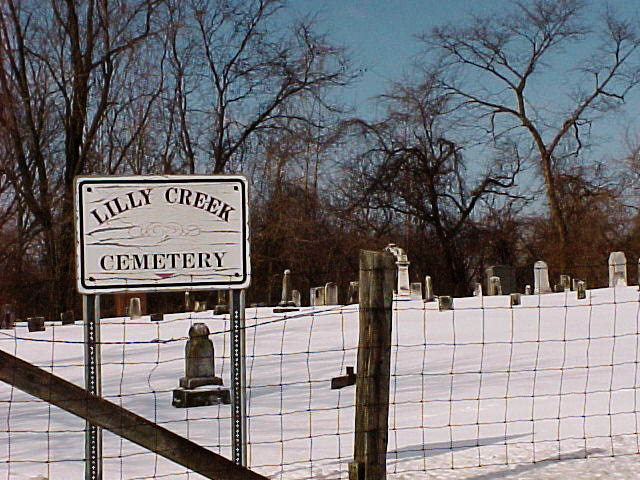