Location: east side of SR 9, between 4th and 5th streets in Alexandria

The International Order of Odd Fellows, IOOF, a group devoting themselves to good works, began in England in the last part of the 18th century and spread into the United States in 1818.  The first lodge of this benevolent organization in Madison County was started in Pendleton in 1850.  By the end 1860, the Necessity Lodge No. 222 was initiated in Alexandria with ten charter members whose last names are of families who helped settle Monroe Township: Heagy, Harriman, Chamness, Pickard, etc.  As part of its involvement in the community, IOOF No. 222 purchased land southeast of Alexandria with plans to design a large cemetery "conducted on modern principles."  Part of the original twenty-five acres purchased must have already been in use as a burial site since there are legible gravestones with death dates preceding 1860 in the oldest section of the present IOOF Cemetery.  The IOOF board of trustees had the property landscaped with trees, evergreens, and drives, making the cemetery, according to Forkner in his 1914 history, "one of the prettiest in Madison County."

By mid 20th century, the cemetery had been turned over to the Monroe Township trustee and was in need of restoration.  The restoration, including the resetting, cleaning, and re-incising of stones, was accomplished by 1990.  Examples are shown at right and left.  The old burial site, once quietly ensconced along a wooded strip of the Anderson-Alexandria Pike, is now a most visible landmark in the southern part of ever-expanding Alexandria.  The pike has turned into busy SR 9, and the oldest section of the burial ground now abuts the it.  Many graves are within a foot or two of the pavement.  For this reason, member of the MCCC (2006) Nancy Draper has recommended to highway improvers that a cement curb be placed between the highway shoulder and cemetery border. 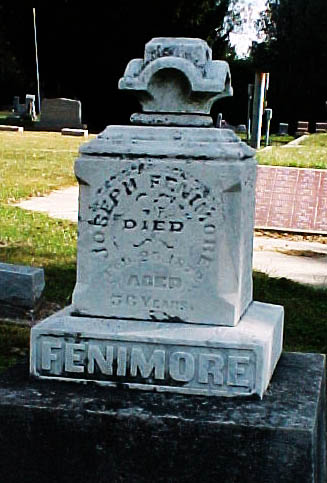 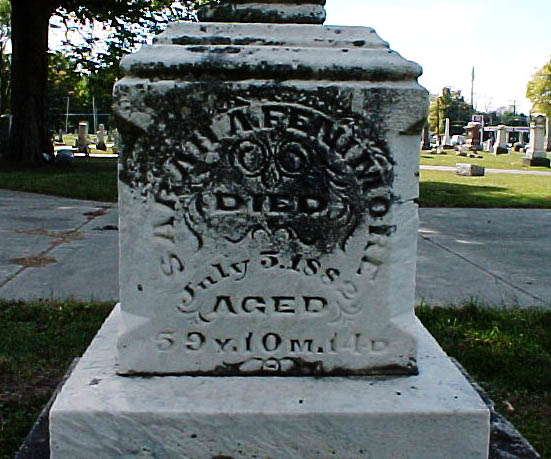 worker of iron and metals, maker of tools, and farrier to horses.  Joseph was born in Ross County, Ohio, February 25, 1816.  In 1836 in Ohio, he married Sarah Griffey, born on August 21, 1822, also in Ohio; they traveled west together, settling where Alexandria was developing.  Because of his occupation, Joseph would have been a very important figure in the daily activities of the community.  Blacksmiths not only kept horses shod, and therefore usable, but also made and fixed anything metal: farming and lumbering tools, household utensils, lamps, door and window fixtures, parts to wagons and wheels, etc. In other words, Joseph Finnemore, the area's first "smith," would have been indispensable to a thriving community.  Joseph and Sarah had ten children: John, Lydia, Martha, Sarah, Daniel, Frederick, William, Joseph, Alice, and Charity.  Joseph, the father, was also one of the first members of the IOOF, and he died on his fifty-sixth birthday, February 25, 1872.  Sarah, who died July 5, 1882, is resting next to her husband.

One of the earliest prominent settlers to Monroe Township buried at the IOOF is David Bowers.  David was born in Pike County, Ohio, on July 12, 1811, the son of Solomon and Deborah Lyton Bowers, both of Virginia.  In 1834, shortly after the first settler Micajah Chamness pioneered the township, David arrived ready to seek his future.  David entered  eighty acres in the same year and started to develop a homestead.  Throughout his adult life, he purchased more property until he was the owner of three fine farms.  In 1835, he married Susan Edwards, daughter of Peter Edwards, whose family had also settled early in the Alexandria area.  Susan was born in Wayne County, Indiana, in 1813.  Susan and David had one son, Andrew.  She is one of the earliest burials, having died December 31, 1846, "38y 1m 25d."    David then married Ellen Reed in 1853, and they had four children: Henry P., Susan, James E., Elizabeth, and David W.  After Ellen passed away, David Bowers married for a third time.  Mary Noble, daughter of pioneer William Noble, was born in 1829, and she and David had one son, Nathan.

Historian Samuel Harden was a personal friend of David Bowers and provides  this description:

"He has been an industrious, sober citizen, held in high esteem by his fellow-citizens who have known him so long.  At one time he resided one mile and a half southeast of Alexandria, but now the town has grown almost to his door...  In 1874, he bought my first book, and I am indebted to him for many favors shown me from time to time.  In person Mr. Bowers is about five feet eight inches high, fair complexion, heavy set, inclined to be fleshy and will weigh near two hundred pounds."

David Bowers died in 1898. He, his wives, and some of his children are interred in the old section of the IOOF Cemetery.

"He [Joseph] and his wife [Anna] are industrious and have the confidence of the people where they have so long resided since 1862 when they came from Rush county, Indiana, and settled in the then new county.  Mr. Draper has always been a stanch Republican and he and his wife belong to the Christian church.  their home is one of plenty and they delight to entertain their many friends.  Peter T., their son, who is a teacher of long experience, lives near the old folks..."

The Draper family still has descendants farming in Monroe Township.

The more elaborately decorated stones above are for the young.  At center Louisa Cummings' marker has a shield and what was once the figure of a dove in the hollowed circle.  She was the wife of Thomas Cummings and was only "17Y 8M & 2D" old when she died on August 12, 1872.  The other two stones are for children.  At left, Genevieve Schaefer was four years old when she died in 1892.  At right, Joseph Ludwig Zobler was only seven when he died in 1910.  English, Swiss, German--their names testify to the many immigrant families who developed the area.

The monuments below represent the settlers with the surnames of Phillips, Bertsche, Dobson, and Jones.