Location: southeast corner of Harrison and 4th Street in Alexandria

The first area used for burials by Alexandria residents after the village's founding in 1836 was a small wooded hill on the outskirts of the settlement.  What 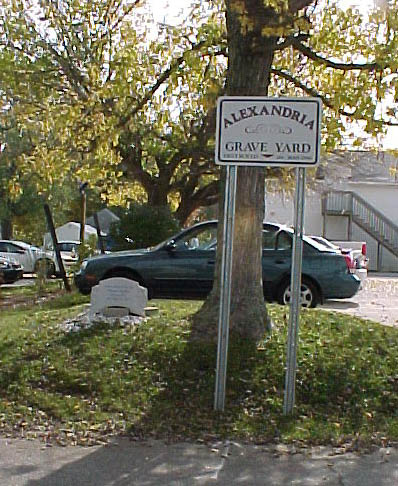 with 20th century development, however, this same ground is now within the city limits of Alexandria.  What was once a graveyard is now under pavement, a parking lot at the corner of Harrison and 4th Street.  No record exists of who was buried in this first graveyard or when the ground was transformed into building sites.  The MCCC only has references to this cemetery from historical documents.  In acknowledgement of the graveyard's existence, the MCCC has placed a sign at the location for historical purposes.

Besides the historical documentation, there is also a ghost story, a folk legend, connected with the Alexandria Graveyard.  An unidentified publication celebrating Alexandria's centennial in 1936 relates the story:

"When early settlers came, they chose a place for camp meetings.  There was a grove on the Peter Edwards farm on a hill, near Madden's grocery.  When anyone died they were buried on that hill because it was planned to build a church there.  The disappearance of an orphan girl caused a change in the plans, and the church was never built.  The orphan was supposed to have been stolen by the Indians.

"The graveyard went to rack.  Trees grew around it, enclosing it like a hedge, and vines tangled through, making it dark even at noon day.  As time went on the farm was cleared except for the trees and bushes around the graveyard.

"When green wheat grew around it, it looked like a coral island in the ocean with a barrier reef.  You could see over across Pipe Creek the trees tossing, and during a storm the lightning seemed like spirits bursting from their graves.  It was even whispered that a spirit had been seen there.  No boy would take a dare to go over there and see, even in day time.  Once some did.  When boys venture there it took all of their courage.  They crept down the fence around the field.  Over there in the field was a bunch of dark trees.

'Let's climb over,' one stammered.

"One followed the leader on hands and knees through the grain.  They lay with their hearts thumping and looked into the thicket.  White spots in the dimness were gravestones.  They were about to climb over when a rain crow squawked--the noise was frightful.  One word 'Spirits!' and they ripped their way through the field and legged it with all their might till they reached the old bridge.

The ghost gained gradually.  Some doubted such a thing.  Several had seen it and swore to it.  All who had seen the ghost agreed that it came upon them suddenly, noiselessly.  It had been crossing fields and barely brushed the dew from the plants.  Bye and bye it settled down to a few facts.  The ghost made irregular trips, at midnight [of course], from the graveyard to the Chaplain burying place [north on Harrison Street].  It followed the fences wherever there were bushes.  It was seen most often coming down past Beulah Park to Berry Street, along Berry Street to Black Street and then north to about Monroe Street.  The ghost varied its course frequently and you never knew what time you might be scared out of your boots."

The MCCC does not have record of any recent sightings.  Maybe the ghost was too upset by the modern construction and paving at what was once the Alexandria Graveyard to continue its wanderings, or, perhaps, the ghost has "varied its course" yet again and is gliding on a  new path between the graveyard and the Chaplin Cemetery--undetected as yet by area residents!