"Hannah Makepeace died in Anderson on the 18th, after a lingering illness, aged 48.  The deceased was one of the oldest inhabitants of Anderson, having lived here since her marriage, about 30 years ago[1828].  At that time the court house square was a forest, and there were but few dwellings in the town.  She, with her husband have, therefore, shared the privations, toils, and troubles incident to the settlement of a new country, and have as a reward for an industrious life accumulated much of the world's goods.  She was the mother of a large family of children, to whom she had endeared herself by her many amiable qualities, who have now to mourn their irreparable loss.  She had gained the esteem of their neighbors as was attested by the respect shown the family on the occasion of her burial."

While the Federal style was straight and severe, the Victorians of mid and late 19th century enjoyed curved lines and an abundance of decoration.  Mollie Brown's gravestone, at left, is an excellent example of high Victorian style.  Th

e outline and forms have flowing, rounded lines and include acanthus leaves, ribbon, and rose.  The rose represents victory, pride, and triumphant love.  The stone reads, "Mollie, wife of ...Brown, died Jan. 25, 1865, aged 29Y 6M 19D."  Viola's, in the middle, has her personal data etched on a scroll topped by a wreath of roses.   The stone on the right, while difficult to read, displays roses under the arched cornice crowned with petals.  The medallion contains the personal data framed by rope and tassels.

The hand was a popular memorial motif for Victorians.  The most common image found on 19th century gravestones is that of a hand with index finger pointing heavenward.  This meant that the soul of the departed was going to heaven or that the living should be more responsible for where they would spend the afterlife.  Clasped hands, far left and right, symbolized the partnership of husband and wife on earth.  A palm holding a small book or message, middle left, represented religious fervor.  The hand drooping down with a broken link, middle right, stood for the languishing sorrow for the family member now separated.  The three links represented the trinity and faith.

To Victorians, an urn--whether two dimensional like the ones on James Tharp's

stone above or three dimensional like the one at righ

t--represents the decay of the body: mortality.  The drape, often included, would symbolize mourning for the one who has passed away.  Other popular images were a winged face, which stood for the soul in flight, a female figure (without wings), which represented  sorrow, an anchor, which indicated hope, and a sheaf of wheat, which symbolized a fruitful life.

Some Victorian stones have multiple symbols, like the one on the left: a bible and perhaps a hymnal for faith, roses for love, and a drape for mourning.  This period variety, a "podium"-- which is topped with something, often draped, having flowers and many times a medallion containing the personal information-- was another popular style during the mid to late 19th century.

Religious verses were also popular additions; however, because of the soft white stone used at this time, the words are now often difficult and sometimes impossible to read.

Another important change occurred in the last years of the 1800s because of the preference for chunky squares and rectangles: instead of standing thin slabs upright on end as had been the custom, blocky grave markers could merely rest on top of the earth.  This form of setting stones is still used today.

The stones above are not Federal, Victorian, or Edwardian.  They are the military markers designed for veterans of the Civil War.  These thick, gray to white tablets, on which a shield incases the personal data, can be seen from a distance as indicating the graves of Civil War veterans.  From one family, the Ryans represent the many Madison County soldiers who helped preserve the Union.

The first public cemetery for the city of Anderson was ordered in 1832.  It was situated at the end of what was called at that time Bolivar Street (now east end of 10th St., east side of Fletcher; see map on Anderson Township page) and so was referred to as the Bolivar Cemetery and later the City Cemetery.  This first official graveyard for Anderson was supposedly purchased from John Berry who had initially bought the entire village from the Delaware, platted the town of Anderson, and donated city blocks for the county seat.  With the construction of the Pittsburg, Chicago, and St. Louis Railroad almost two decades later, the Bolivar Cemetery had to be moved.  Most of the remains were re-interred in the Tharp/Thorpe Cemetery located on 11th Street and Delaware.  Unfortunately, some bodies buried in the Bolivar were included in the fill dirt used for building up the railroad bed.

The Tharp Cemetery had been in use since 1827 when the Methodist Episcopal Church needed a cemetery for its members.  Collins Tharp had laid out the cemetery's design.  With the expansion of Andersontown, though, the Tharp had to give way to progress.  Those buried in the Tharp were re-interred in 1863 in what was referred to as the "New City Cemetery" north of Anderson at the corner of Grand Avenue and Alexandria Pike: this was Maplewood. In 1902, to meet Anderson's still growing needs, a much larger, modern cemetery was developed to the east of the original and also named Maplewood.  The new, business-like concern took over the care of old Maplewood and renamed it West Maplewood.

One of the burials re-interred at Maplewood, the new city cemetery, was William Allen, one of the earliest settlers to the area.  William was born in Philadelphia in 1791.  He served during the War of 1812, moved afterward to Ohio in 1816, and traveled further west to the New Purchase in 1821, settling two miles east of Andersontown.  He brought with him a wife and growing 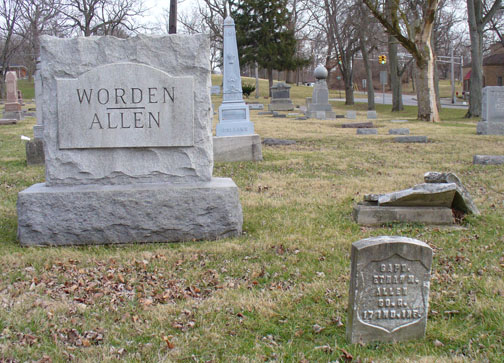 family of ten children and entered purchase of his homestead June 19, 1823.  Mr. Allen held several important positions for the new little village of Andersontown.  He was a justice of the peace, a school teacher, a  correspondent for the War Department during the Indian Massacre, a county commissioner, and the first county assessor.  The first election was held at his home.  William also had the distinction of owning the first whipsaw in the county--high technology for pioneers.  He sawed the lumber for the Makepeace mill in Chesterfield, a mill being indispensable in the production of area grains, wool, and lumber.  Mr. Allen is described by historian Harden as being tall and slim, "well informed and of good business qualifications, which were appreciated at that early day."  William died in 1829.  His son John was responsible for seeing that his father's remains were removed and re-interred in the beauty and safety of Maplewood.

One of Anderson's first prominent citizens was Nineveh Berry, a veteran of both the Mexican-American and Civil wars.  Nineveh Berry was the son of city founder John Berry.  Nineveh was born in 1804 when the Berry family was living in Ohio.  He was eighteen or nineteen when his father laid out the plat for Andersontown.  Nineveh was the city's first postmaster.  Mr. N. Berry operated  the post office out of his father's house. The mail arrived on horseback and came just once a week.  Nineveh was considered a "walking post office" because he carried the mail to his customers in his hat. Therefore, Andersontown had one of the first free mail delivery systems in Indiana.     Nineveh also served the Madison County community as county recorder for seven years, county treasurer for two years, deputy sheriff, and county surveyor.  As surveyor, Mr. Berry laid out the plat for Alexandria in Monroe Township.

Additionally, Nineveh Berry was a military man.  He  served in Indiana's armed forces, attained the rank of colonel, and was always referred to by that title.  He was appointed September 8, 1847, for duty in the Mexican-American War and saw action in several battles. Later for the Civil War, Nineveh Berry enlisted, in spite of his age, and served until his health was compromised.

Nineveh was over six feet tall, weighed over 200 pounds, and had a commanding appearance.  Something of a county historian, himself, Nineveh is given credit by author Samuel Harden for passing on many recollections of Anderson's past.  As Harden summarizes, "Throughout all his associations, both public and private, he [Berry] has maintained the honor and respectability to all his fellow citizens..."  Col. Nineveh Berry--early settler, community leader, soldier, Hoosier character--died in 1883.  He is pictured in the 1880 History of Madison County, Indiana on page 87.

The present answers the past.  In 1974, the MCHS's Cemetery Conditions Committee was making transcriptions of grave markers.  Volunteer Robert Hensley was working on the oldest section of West Maplewood, that which includes the graves removed from Anderson's previous places of burial.  At the end of his typed report, Robert made special mention of two early stones:

"The markers being very old...of the type of the early 1800s have these inscriptions.

"In Memory of Daniel Harpold

Who was born April 12

Is there any history connected with these?"

Yes, Robert, there is some important Anderson history here.  The Harpolds are listed as among the first settlers to Andersontown, and Daniel was the builder of the city's very first court house.

It should also be noted that resting at West Maplewood are three of Madison County's historians.  Edith Cascadden focused on the history of Lapel and Fishersburg.  Her work is referenced on the Stony Creek Township history page.  Also buried at this cemetery is John L. Forkner, businessman, banker, and mayor of Anderson for two terms in the early 1900s.  Forkner was born in 1844 and died in 1926.  He is the author and editor of the 1914 History of Madison County, Indiana.  Samuel Harden, born in 1843, was the area's first chronicler, publishing his History of Madison County, Indiana in 1874.  Harden expanded upon this work with the publication of The Pioneer in 1895 shortly before his death. A veteran of the Civil War, Harden additionally produced The Boys in Blue about the county's soldiers in that conflict.  The works of both Forkner and Harden are among the literary sources used throughout this web site for the biographical and historical information.