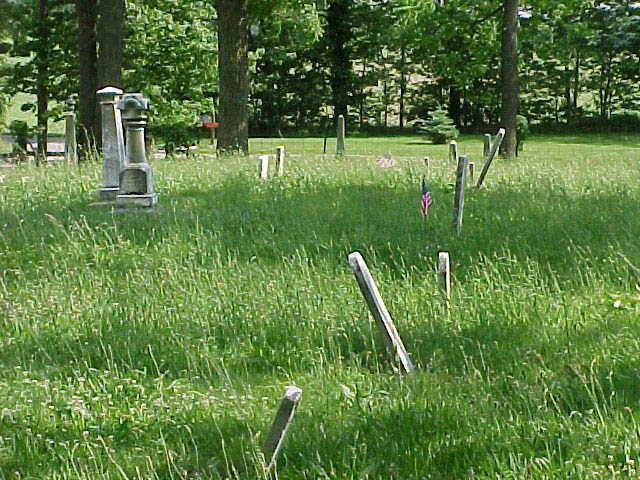 A little over a mile from where the Holson/Holston Schoolhouse once stood, the Holson Cemetery sits on a little knoll in the nook or "dog leg" of CR 140E.  The cemetery is on land once owned by the Holson/Holston family and across the road from what were the farmlands of the Maynard and Vermillion families, all early settlers of Monroe and Richland townships.  Vermillion and Maynard are the names on most of the tombstones in this quaint little mid Victorian graveyard.  Another family plot in this burial ground is that of the Swindells.  Located among this latter family is the unmarked grave of Perry Swindell, a Revolutionary War veteran. 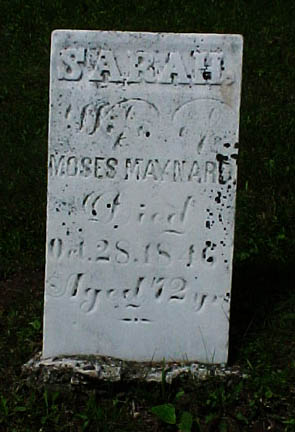 re one of the oldest families in Monroe Township.  Patriarch of the clan was Moses Maynard, who was born in 1767 in North Carolina.  He lived to be 107 years old, passing away on June 18, 1874, and is buried at the Holson.  Moses ventured to Kentucky in 1788 after marrying Sarah Greenstreke.  She was born around 1774 and died in 1846 at seventy-two years of age.  While Moses no longer has a stone, Sarah's is in excellent condition and is pictured at right.

Madison County's oldest resident at that time, Moses was very strong and enjoyed excellent health all of his life. His obituary reported that he worked hard in the farm fields into his nineties.  He was proud of the fact that he had voted in all Presidential elections except the very first one--George Washington's.

Moses, Sarah, and their married sons came to the woods southeast of Alexandria from Kentucky in 1834.  In June of 1842,  Moses Maynard, along with ten others, organized the "Little Killbuck Old School Baptist Church" at his home.  In 1844, the congregation built a log meeting house on the land owned by son Christopher, 1815-1862. 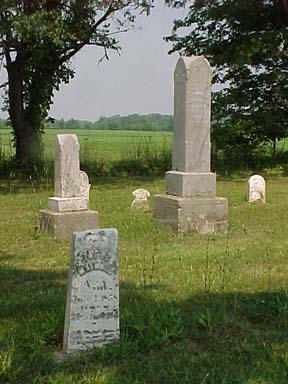 was born April 7, 1813, and married Lucinda Fuller in 1833. Barnabas and Lucinda had fourteen children, "one of the largest and most interesting families of the county" according to Harden who also reported that the mother Lucinda Fuller Maynard was still living as of 1895.  Barnabas died September 27, 1889.  His stone is the tall dark gray one in the picture at left.

Two years after the Maynards came, the Vermillions arrived in the area: the land on the border between Monroe and Richland townships.  In fact, the two families lived just across the ro 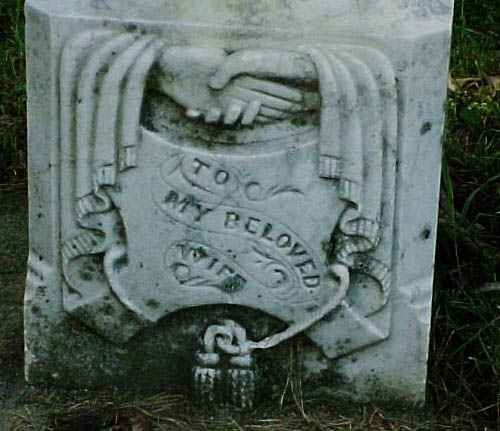 ad from each other, and both owned land in both townships.  Jesse Vermillion, Sr., was the head of this family, and interestingly, he was over six feet tall, an exceptional height for that time.  He was born in Virginia, June 5, 1804, and traveled to Ohio first.  He married Catharine Justice when he was about twenty-five and arrived in Madison County in June 14, 1835.  Shortly thereafter, Catharine died and had to have been one of the first interments in the Holson.  Jesse would eventually marry two more times, having children from each of the three marriages.  At his death on February 8, 1892, he was ranked as among the wealthy in the county, owning over 800 acres of land.

The Holson is named for J.R. Holson/Holston, who was born in Preble County, Ohio, in 1812.  He came to Madison County in 1839 and purchased land in Richmond Township.  J.R. was a devote Methodist who aided in the development and growth of that church.  He donated land for Wesley Chapel located on CR 650N and its adjoining  cemetery.  He supported the Sabbath school movement in the county and on his property hosted an annual "camp-meeting" attended by Methodists from around the country.  J.R. believed in education, donating a plot of ground for a school situated across the road from his Wesley Chapel.  According to Madison County historian Samuel Harden, Mr. Holson was "a large, powerful man, full six feet high and of fair complexion...a very worthy citizen of unflinching integrity."  While J.R. Holson is buried at Wesley Chapel, the Holson is the earlier of the two cemeteries.