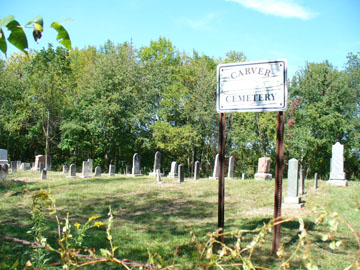 The Carver Cemetery lies on the south bank of Lily Creek in section 31, close to where the boundaries of Boone, Monroe, and Pipe Creek townships converge.  This traditional family burial ground, therefore, holds early settlers from all three townships.

The Carver is named after John Carver who died in 1871 at "78y 4m 15d."  John's son George, 1835-1908, and George's wife Elizabeth deeded to the county this ground to be used as a cemetery.  Many Carver family members are resting here including John's brother Lewis, who died in 1861 at "66y 9m 22d."  Other early settlers--Ezekiel Chalfant, 1800-1881, and Sarah, 1784-1845, and Daniel, 1808-1839, Freestone--and members of their families also repose at this location.  Additional families on the burial list with the surnames of Hasty, Runyan, Welborn, Stanley, Redding, and Dickey still populate this agriculturally based township. 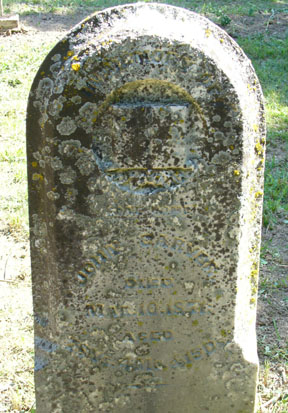 Other Carver family members are below: Left to right, Almira, wife of Lewis died in 1866 at twenty-two years; Alvin died in 1864 at twenty-four; Erastus was only one year and one month when he died in 1862; and John K. was nineteen when he passed away in 1876.

Among the earliest burials was a man of significance: Micajah Chamness, 1779-1840.  Micajah and his large family helped settle Monroe and Pipe Creek townships.  They arrived in 1831, shortly after the last Native Americans moved to reserves in the West.  Mr. Chamness is the settler to first own the land that is now Alexandria. (For more on Micajah Chamness, go to the Monroe Township page.) 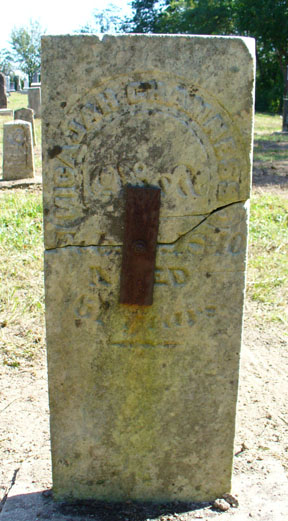 The Chamness family is represented in these four pictures.  Above is family elder and pioneer settler Micajah, 1779-1840.  His is the oldest legible stone still existing in the Carver.  Below left is his wife Sara who died in 1873 at fifty-eight years.  The clasped hands represent a married couple's partnership in life.  Middle is their daughter Nancy, and at right is their son Isaiah.

Pictured below, the columned monument for Daniel Welborn is flanked by the markers for two of his sons, Milton, right, who died at eleven years in 1862, and Hesikiea, left, who died in 1844.  Hesikiea lived to be just two months and four days old. Undoubtedly, other children and infants are ensconced in unmarked graves along the Carver's aisles.

The stones for some of the other infants and children of settlers to area are pictured below, left to right: Anderson, son of A. & L Corden; Granville George, who died when six years old in 1879; two "infants," in a double marker and probably in the same grave, for the Stroud family; and Amanda Bell of the Woolen family.  The gravestones for children, by tradition and for economy, were generally much smaller than those for adults.

The two stones below are females from the 1850s.  Another member of the Stroud family, Elvina, died when thirty-two years of age in 1859 while Cynthia, wife of James Smith, died in 1850 at twenty-five.

Grave markers from the last half of the 19th century stand for Catherine Dickey, left; A.F. Moyer, who fought in the Civil War, middle; and Calvin McNair, right.  The Moyer stones' style, referred to as "a tree cut off," was popular in the last twenty years of the century.  Different ornaments, symbols, and flowers could be attached to the trunk.

The three stones above are interesting for their uniqueness.  The one on the right is for Vina Corden, who died at fifty-five years in 1877.  While this stone has the typical arches and curving lines of Victorian architectural style, it also has atop the data plate the upper torso of a female angel with wings, the only one of this design in the county.

As demonstrated in the middle marker, the soft marble, so popular in mid 19th century, allowed the stone cutter to add decorative embellishments like this unusual sign or scroll with hook.  The porous material, however, also allowed the incising to fade rapidly with time.

To the left, the arched top, Bible, and ribbon can be found on other Victorian grave markers.  However, the hand with sleeved arm draped over the top is unique.  As seen from the front of the stone, this feature suggests that a hidden mourner is kneeling behind the stone and is holding on to it and the bible for support--a very evocative picture.

In the summer of 2008, the MCCC voted to give the Carver Cemetery a major cleanup.  Contactor Larry Brown and his crew tore out unwanted growth, weeds, small trees, and anything else that was obstructing the stones.  Vegetation preventatives were applied afterward.  The pictures above, showing an unobstructed view of the individual stones, were taken after the refurbishment.  The ones below show how the cemetery appeared before.

Sometimes, especially in a small agriculturally based township, the trustee does not have enough money to give the proper care to the pioneer cemeteries.  Such, unfortunately, had been the case before the fall of 2008 at the Carver where basic mowing was accomplished but spraying against encroaching vegetation was not.  The Carver's plight was made sadder in light of the fact that back in 1998 the Summitville Boy Scout Troop #328 spent much time and energy clearing, cleaning, and researching this cemetery.  Member T. J. Fech was awarded the rank of Eagle Scout for his contribution in researching the cemetery's history as well as reclaiming, at the time, its physical integrity.  However, since the late 1990s, weeds and undergrowth were allowed to obscure even the Carver's largest stones.

Below is a general shot of how well  the Carver Cemetery can be appreciated now. 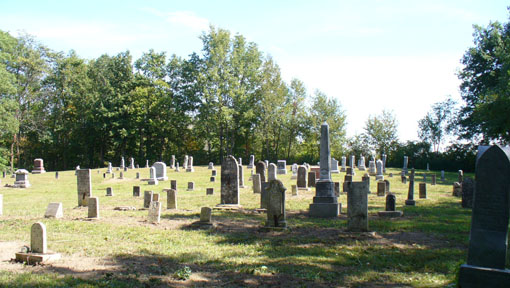