Anderson Township was one of the first five townships created in the county.  It and the county seat of Anderson derive their names from Captain William Anderson, the English name for Chief Kikthawenund.  Kikthawenund was one of the most important leaders of the Delaware tribe.  These Native Americans had been living along the East Coast in the area that would eventually become the state of Delaware when the New World was first being settled, thus the English name.  The Native American name for the tribe is the Lenni Lenape, meaning "real men" or "ancient ones."  The Lenni Lenape were revered by other tribes of Native Americans.  As their original homelands filled with colonial settlers, the Delaware moved west eventually settling in the 1790s along the banks of White River, which they called the Wapihanne.  (For a map and more information, go to the Madison County history page.)

According to the Madison County Historical Society, the Delaware/Lenni Lenape established around fourteen villages along the Wapihanne's banks.  The villages extended through what is now Delaware, Madison, and Hamilton counties. Chief Anderson/Kikthawenund's village, which would later become Anderson, was formed around 1798 and was called Wapiminskink meaning "chestnut tree place."  Chief Anderson's individual camp was located on the southeast corner of Central and 8th Street, just to the south of the Eisenhower Bridge.  In his article "From Chestnuts Trees, Anderson Grew," appearing in the August 16, 2009, edition of the Herald Bulletin, Stephen Jackson, Madison County Historian, paints a vivid picture of the beginnings of Anderson:

'The village was described as being surrounded by dense forests, dark and shadowy, unbroken except by Indian trails; through these tangled woods ranged bears, deer, wolves, and panthers.  Civilization had not yet left its imprint upon the landscape...

'...Wapiminskink was first settled by no more than fifteen or sixteen families.  The site was selected in keeping with three criteria important to the Delaware.  It must be elevated which allowed them to see an approaching enemy, have an abundant water supply nearby, and have fertile soil for growing food.  The site chosen afforded all three as the village was situated on bluffs 75 feet above White River.  Scattered throughout the site were numerous springs flowing with fresh water.  To the north of the village was a flat fertile area where corn and other vegetables were planted.  The surrounding forests were teeming with game and numerous blackberries, and the river had abundant supply of food.

'At its largest size, the village was spread over an area that today would include St. Mary's Church on the south to the Madison County Jail on the north.  The river was its eastern boundary with possible some habitation on the east side of the river.  Its western boundary would have included the area where the Madison County Court house now stands.  Altogether this area encompassed approximately 30 acres.  It was marked with gullies and ravines that led to White River.  The deepest ravine was near the present corner of Eleventh and Main Streets.  A stream that rose in the southwest part of present day Anderson flowed through there on its way to the river.

'We know the Indians maintained a large field in the rich bottom lands on the south side of the river stretching from about the intersection of Fifth and Main Streets westward along the river.  ...as the population of the village grew to about 1,000 in 1818, more food was needed and the planting ground was expanded westward to almost Madison Avenue.

'Situated about where St. Mary's Church is located was the Long House or Council House...

'The Delaware burial ground was located where the Anderson City building stands today.  The area was roughly bounded by Eighth Street to near the Gruenewald House, and Central Avenue to Main Street.

'There was another important consideration in the Chief's mind when he selected the village site.  Two forks of a famous trail that was vital to travel through the wilderness converged here.  The trail was called the Conner Tail and it followed an already historic Indian trail which started at the mouth of the Miami River near Cincinnati wending its way past John Conner's trading post southeast to Brookville.  It ran north through Connersville and then followed a northerly direction passing New Castle.  Two miles north of New Castle the trail forked.  The east fork proceeded to Old Town Hill, southeast of Muncie.  The west fork turned slightly northwest until it reached Wapiminskink.  After leaving Muncie the east fork traversed the countryside north of White river, and roughly paralleling it, until it crossed to the south side of the river at Wapiminskink.  After crossing the river the fork ascended the river bank and at the top of the bank it joined the west fork and became one trail again.  This junction today is at or within a few feet of the intersection of Wheeler and Cincinnati Avenues in Anderson...  The Conner Trail then passed through the village and exited on its west side following closely what are today west Eighth Street Road almost to Strawtown in Hamilton County...passing through Noblesville until it reached William Conner's trading post at what is today Conner Prairie Farm.

'Not only did this important trail allow the flow of goods between John and William Conner's trading posts and points east, it was the major route traversed by the Indians when visiting the villages along the river.  Chief Anderson chose wisely when he placed his village at the junction of the forks of this historic trail'

Not only did Chief Anderson recognized the importance of this location, but also did Captain John Berry,1777/9-1835. As stipulated by the 1818 Treaty of St. Mary's, the Delaware/Lenni Lenape were required to vacate their lands in Indiana's New Purchase around 1821.  It was in March of that year that pioneer John Berry, purchased from Chief Anderson's son-in-law William Conner (of the Conner trading post mentioned above) the chief's village referred to by white settlers as Anderson's Town/Andersontown.   Berry, in the summer of 1823, laid out the original plat for Andersontown.  The plat followed the same design as Chief Anderson's original Delaware/Lenni Lenape village and trails.  In November of 1827, Berry donated the land for the public buildings with the condition that the county seat be moved from Pendleton to Anderson.

As the marker, above left, from the National Register of Historic Places explains, the Gruenewald house, right, northwest of the Madison County Jail, seen at the top of the page, was originally the site of one of Capt. John Berry's log cabins.  Berry received his land patent from President Monroe in 1823 and purchased the Lenni Lenape village from William Conner, son-in-law of Chief Anderson.

John Berry started Andersontown's "firsts."  After designing the town square area, Berry proceeded to erect a two-story log cabin in the center of the west side of the square.  The cabin faced east on what is now Meridian Street.  The log structure was used as his dwelling and an inn where travelers could spend the night and procure food and drink.  This pioneer's version of a hotel was "known far and wide at that time," as historian Harden describes it.  The first post office was in this building, and one of the first postmasters was Berry's son Col. Nineveh Berry.  The first Madison County court sessions, which involved the massacre of innocent Native Americans, were held in this structure in 1824.  Berry, in fact, was one of the first justices of the peace in the county.  In 1832, Berry was to deed over land for the first city cemetery which was located on what was then called Bolivar Street.  (See maps above and picture below.) (For more on the first post office, Nineveh Berry, and first cemeteries, see the West Maplewood Cemetery page.)

Anderson's founder was a large man for his time, weighing almost 200 pounds, and he is said to have had a commanding, military bearing.  He is not buried in Madison County.  John Berry became ill while driving a herd of hogs north to market and died in Huntington, Indiana; he is buried there.

The first business developers to Andersontown were the brothers Allen and Alfred Makepeace.  As merchants, they arrived as early as 1820--before Berry--to the Delaware village on the Wapihanne/White River and began selling goods and supplies from their wagons to the Native Americans and later to the early settlers.  The rest of the Makepeace family, including father Amasa, entered the county around 1821.  The family began a commercial legacy.  While Amasa and Allen centered their financial activities in Chesterfield in Union Township, Alfred focused on the new settlement of Andersontown.  Alfred's business enterprises over the years helped change the little town into a city.  During his life he amassed a great deal of property and eventually built the U.S. Hotel in 1852, a showcase for its time.  Additionally, Alfred also platted and helped organize the town of Frankton in Pipe Creek Township.  Alfred died in 1873 and is buried at West Maplewood.

Alfred's brother Allen added to his own business developments and became associated with the early banking in Anderson.  This increased Allen Makepeace's already considerable wealth, and at the time of his death in 1871, Allen was worth over a quarter of a million dollars.  Actually, the Makepeaces--father Amasa, sons Allen and Alfred, and their descendents--economically improved the entire county in those early years. (More information on the Makepeaces can be found at the Union Township page, the Pipe Creek Township page, and the Otterbein Cemetery page.)

The first doctor Dr. Burt Dickinson arrived in 1826/7.  The first log school was built in 1833. It was on Central Avenue between 10th and 11th streets where the Anderson Public Library is now located (how symbolic).  The first newspaper the Federal Union started in 1834.  Andersontown was finally incorporated in 1839, and in 1844 its name was shortened to just "Anderson."

Growth was slow for Anderson, the former Delaware village.  In 1838, Anderson's population was 350.  Twenty years later, in 1850, there were just thirty-two more people living in the county's government center.

Other settlers into this area were the families of Eli Harrison, John and Christopher Davis, Daniel Harpold--the contractor who built the first court house--William and Isaac Young, William Allen, William Curtis, and Samuel Kinnamon. 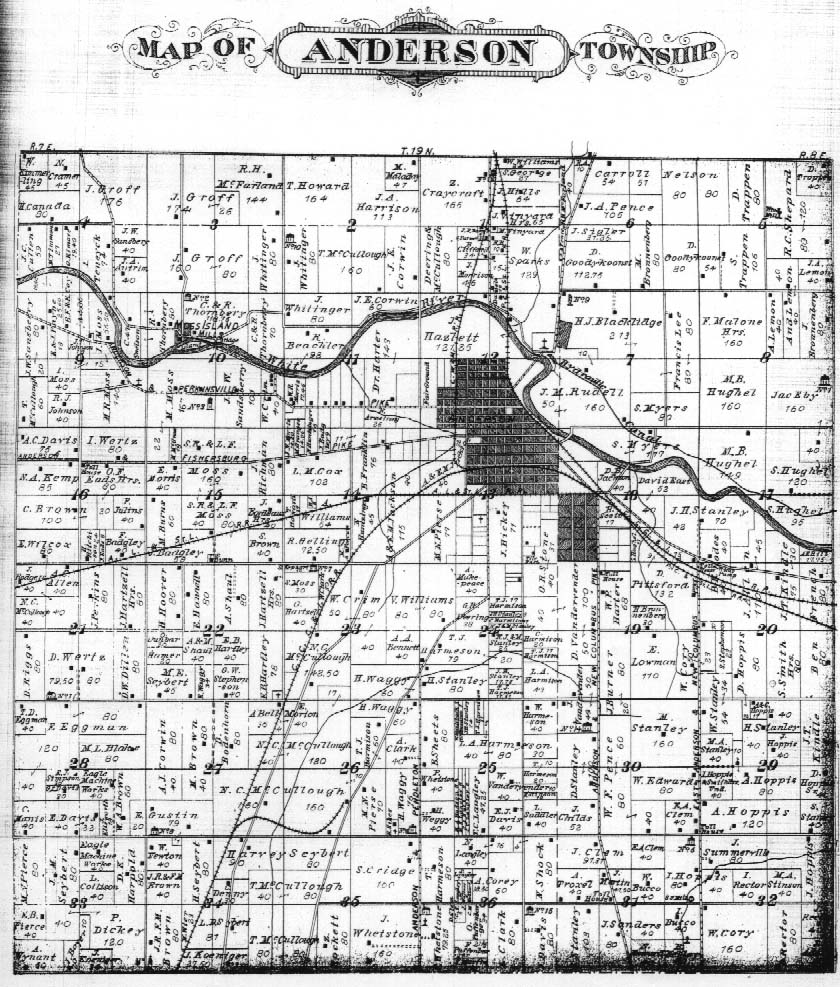