Location: east of Main Street on the north side of 35th Street. 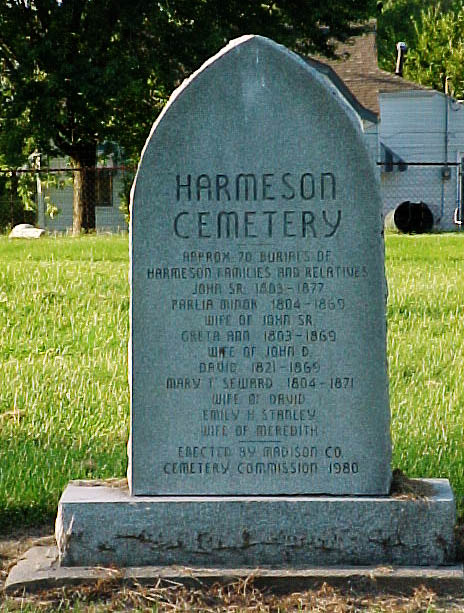 Many cemeteries started as the Harmeson did: on an accessible, yet out-of-the-way hill at the back of the family farm.  Especially before the age of embalming--that is before the Civil War--family members had to relinquish to the earth, rather quickly by today's standards, the remains of loved ones who had "passed on."   So, for most of history actually, people who worked the land were buried in the earth they nurtured and depended on for survival. Little did the Harmeson family realize that what for them was an isolated knoll in the back cow pasture would in the 20th century be a neighborhood for many houses and families:  the Main Street Housing Addition within the city limits of Anderson.  The 1876 plat map for Anderson Township does not show this cemetery; however, another map, published in the same year, "Anderson and Vicinity," which shows the town in greater detail, does record the Harmeson Cemetery's existence.

John Harmeson, who is the first listed on the stone tablet above, came to Madison County in 1836.  His wife, whom he married in 1823 in Belmont County, Ohio, was Parlia Minor. She is the second name listed. Their four oldest children were born in Ohio before they migrated west.  John and his family settled on eighty acres, then two miles south of Anderson.  There, the couple had their four youngest children.  The names of John and Parlia's sons and daughters are David, William, Clark, Emily, Thomas, Allen, Minor, and John.  As historian Samuel Harden related in 1895:

"By strict economy and industry they succeeded in making a grand farm...  Mr. Harmeson died September 5, 1877.  She [Parlia] died June 19, 1869.  He was seventy-four years, eleven months and six day old.  She was sixty-five years, three months and eighteen days old.  Both [are] buried on the old farm."

Eventually the Harmeson Cemetery would contain approximately twenty Harmeson relatives as well as fifty additional neighboring friends and their family members for a total of seventy burials.  The gravestones for most of these people were lost or destroyed in the early 20th century. Until recently there were just two partial stones remaining to accompany the many sunken graves sites.  In the late 20th century, the MCCC marked the original burial ground-- now surrounded by the mid-century housing development--fenced and gated the cemetery, and erected the stone tablet, pictured above, to acknowledge the earth made sacred by the seventy.  There was never a record made of the people interred at this private graveyard, but the known burials of the immediate Harmeson family, confirmed by genealogists, were recorded on the stone memorial:

In the early 21st century, sisters Anabeth Hodson Radeck and Elva Sue Hodson White, descendants of the Harmesons, had a special request of the Madison County Cemetery Commission.  Anabeth explained that her father Russell Hodson had taken up in the 1940s one of the few remaining gravestones, pictured left, in order to preserve it.  The stone remained with the Hodsons for over sixty years with various family members taking custody of it.  Anabeth asked that the stone be reset in the cemetery, now that the family burial ground was marked, fenced, and maintained. MCCC volunteers responded favorably to her request and directed her to contact the Anderson Township Trustee.  Once that office was notified, the commission was most happy to reset the nicely preserved, very legible marker for "William Granville, son of John & Matilda Harmeson, died Apr. 11, 1853 aged 2y. & 9 m."

It should be noted that John and Matilda's first child Charles died in 1853, and he, therefore, is most likely buried at the Harmeson Cemetery also.  Now, two year old William Granville Harmeson's 1853 gravestone stands as the only legible original marker representing sixty-plus unknown early farmers and residents of what would become the south side of Anderson, Indiana.