Location: west of Columbus Ave., south of RR, between 32nd and 33rd streets;

Family genealogists* have traced the Vandevender surname back to original Dutch settlers who emigrated from Holland between 1620 and 1630 to what was then called New Nederland and what is now named New York City.  From that auspicious connection, however, the story of the Vandevender Cemetery is a sad one.

In the mid 1800s the land at the above location was still agricultural and owned by Adam and Elizabeth Vandevender, the first of that name to come to Madison County.  Adam was from the sixth generation of American Vandevenders.  He was born around 1783 in Pendleton County, Virginia;  Elizabeth, his wife, was born around 1804 in Rockingham County, Virginia.  Adam, his brothers Phillip and Lewis, and their families migrated west to Indiana's New Purchase before 1840 with Adam and his family first appearing on a Madison County census in 1850.  Adam and Elizabeth produced ten children: William D., born 1820; Jacob, 1823-1871; Sarah, born around 1823; Caleb, born 1825; Melinda, born 1826; Decatur, 1829-1896; Sampson, 1832-1852; Esther, born 1834; Lydia, born 1836; and Hiram 1839-1863.  Adam and his descendants owned and worked the farm land along the west side of Columbus Avenue into the early 20th century, and as was customary, provided a small graveyard within their property for the family's departed.  One of the earliest graves may have been for Elizabeth who is not enumerated on that 1850 census.

Tradition and logic dictate that Vandevender family members are buried at this location.  However, as of the mid 20th century, when the Madison County Historical Society was conducting a transcription of gravestones in county cemeteries, the Vandevender's graveyard was marked as "destroyed," and only two stones could be found near the original site.  Neither represented the settlers or their children. The two names recorded on the burial list below are actually in-laws of the Vandevenders.  Lorenzo McCallister was the son of Garrett and Elizabeth McGrady McCallister, and he, at the time of the transcriptions, had a government military marker.  Lorenzo started his service in the Civil War as an officer under the command of his brother-in-law Captain Hiram Vandevender.  They were both in Madison County's Co. K of the 8th Indiana Volunteers.  Captain Vandevender, son of Adam and Elizabeth, was killed in action during the Battle of Vicksburg, and afterward, Lorenzo was raised to the rank of captain and given command of the company.  Upon returning to the quiet life of a civilian, Lorenzo can be found on the 1880 Madison County census and is listed as a house painter. While Hiram was interred at East Maplewood, Lorenzo was buried here at the Vandevender.  At Captain McCallister's death November 15, 1898, the government provided him with a military gravestone for his service as an officer in the Civil War.

The second name from the transcriptions, the "Marry M. Vandevender," is Lorenzo's sister, who was actually named Margaret and who married Adam's son Decatur.  She is also the "Mary M." along with the "H.T." Vandevender, who are shown on the 1901 plat as still owning farm ground near Columbus Avenue. The H.T. would be her and Decatur's son Hendren. Marry/Mary/Margaret died at seventy-five years of age, shortly after the plat of southeast Anderson was completed.

Fortunately, two Anderson newspaper articles from the 1930s do provide some interesting information for Madison County historians.  The August 5, 1932, Herald-Bulletin contained an article about an attempt by some men to rob the graves at Vandevender Cemetery.  The article reports that at that time, the graveyard was "more than a hundred years old" and it still had a wrought iron fence surrounding it.  Wrought iron was fashionable during the late 1800s, and so this indicates that the family had some extra money with which to enhance their property.  In stating that authorities determined that the graves were still intact, the newspaper mentioned that one grave had a brick vault, another indication of some wealth.  Of special note, the article also stated that there were fifteen people buried at the Vandevender, all family members, and specifics were given for two.  One was Decatur Vandevender, born April 8, 1829, died August 29, 1896, and the other was Sampson Vandevender, age 20.  Therefore, of the reported fifteen graves, four are accounted: Lorenzo, Marry/Mary, Decatur, and Sampson, the last two being children of Adam and Elizabeth.  Family genealogists believe that Adam and wife Elizabeth are interred at this location as well, along with Jacob, listed above, and his wife also named Mary.  Undoubtedly grandchildren could also be included in burial list.


At some point, probably in the last third of the 19th century, easement for a railroad was obtained near the cemetery.  As the Vandevender family story puts it, "The railroad took the land."  Of more serious consequence, moreover, was the commercial rezoning of the property in 1964.  This was roughly ten years before Indiana had state laws protecting pioneer and later settlers' cemeteries.  With the commercial business development of the land and then later no evidence of the cemetery's existence, the burial ground was designated as "destroyed."  Several years ago, a GPS reading was taken by MCCC volunteers at the approximate location of the cemetery's original site.  Additionally, a memorial sign is being considered to mark the location of what was once the Vandevender Cemetery. 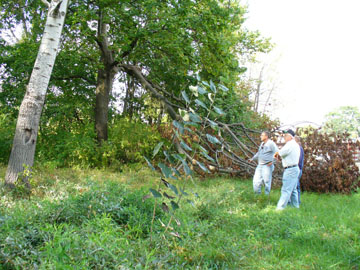 In the summer of 2008, MCCC members Ranny Simmons, in cap, Russ Willis, partially hidden, and Devon Dow, left, searched for any evidence of the destroyed Vandevender.  While no evidence was discovered, members will be returning to the same area in the late fall or winter, when the vegetation is down, in order to inspect the ground for depressions indicating unmarked graves.

*Information on the Vandevender family provided by genealogist Shelly Lembke of Mather, California.