Union Township was named, mostly likely, for the federal union of the states.  While this township is the smallest, it rivals Fall Creek as being one of the earliest areas in Madison County to be pioneered and settled.  In March 1821, William Dilts, 1793-1874, brought his extended family and others from Warren and Montgomery counties in Ohio to what is now Chesterfield.  Here a Mr. McChester, a frontiersman and Indian trader, had a primitive shelter, and one theory for the town's name is that while McChester did not stay, his name did: thus, Chesterfield.  Furthermore, McChester's log hut provided the Bronnenberg family with a home beginning in June of 1821 through the next spring.  (For more on the Bronnenberg family, go to Bronnenberg Cemetery page.)

Later in the decade, Mr. Dilts was to  build east of Mill Creek a double log cabin  which he operated as a traveler's inn.  Eventually finding this inadequate, he constructed at the same location in 1833 the first brick house in the township.  This large, two story building served as home, hotel, and tavern.  It is considered the oldest inn in Madison County.  An article, titled "Historic Taverns," from an unidentified local newspaper, dated November 18, 1901, relates the importance of this early 19th century structure and an early example of responsible bartending:

"The old tavern...is one of the largest and most substantial residences in this part of the country.  When it was built, about 1830, it was the only brick building in Madison County, and people drove all the way from Indianapolis to see it and spend a night in the famous tavern.  At the time that Mr. Dilts built the tavern, Indians were still plentiful in this locality, and though usually peaceable, they sometimes became quarrelsome when able to secure all the 'firewater' they wanted.  At one time a party of them called on Mr. Dilts.  They had already been drinking too much, and Mr. Dilts refused to let them have any more.  They became angry and would have killed the old landlord had it not been for the presence of mind of his wife, who hid him in the cellar.

"The old tavern is built of handmade brick and every bit of work about it was done by hand and in a manner to last for many generations.  The massive mantels of black walnut are beautifully carved by hand.  At that time, this house was by far the costliest one in Madison County.  Most people who see it even now are struck with its massive proportions and wonder how long ago it was built."

William's wife Jane Gustin Dilts, 1794-1876, was a very important person in the community even before she rescued her husband.  She was the midwife for the entire area and often filled in as nurse.  So fondly thought of, she was called "Aunt Jane" by Chesterfield residents.  The Dilts' Federal style house still stands along SR 32, the old trace from Anderson to Muncie, on the east side of Chesterfield. William and Jane are buried at the Otterbein Cemetery.

The Makepeace family is of special importance to Madison County.  Amasa and his sons Allen and Alfred were the first businessmen and developers in the area.  The father operated a mill, indispensable to pioneer farmers, on Mill Creek in Chesterfield.  He built the first school on his property and was also the township's first justice of the peace and postmaster.  Amasa is also responsible for building in 1827 in Chesterfield the first house in all of Madison County.  This was not a one story, rough-hewn log cabin with a dirt floor as most early settlers were living in.  This home was an impressive two story structure framed and finished with planed lumber and insulated with plaster instead of mud chinking and daubing.

Allen continued the milling business as well as the selling of general merchandise, and he platted and helped develop the town of Chesterfield.   Because Allen Makepeace was born in Chesterfield, New Hampshire, in 1802, Madison County historian Stephen Jackson contends that Allen named his newly platted village on the Hoosier frontier after his birth place in New England.  This has the ring of truth since many western pioneer sites were named for eastern places of origin.  Later, Allen Makepeace was associated with the first banks in Anderson and was considered the wealthiest man in the county at the time of his death.

While Allen focused on Chesterfield, his brother Alfred centered his business enterprises in the Anderson area. (For more, go to the Anderson Township history page.)  Amasa and son Allen are buried at the Otterbein Cemetery; Alfred is buried at West Maplewood.  The Makepeace family were the pioneer version of business tycoons; they and their descendents were some of Madison County's early "movers and shakers."  (For more on  Dilts, Noland, Makepeace, and Suman, go to the Otterbein Cemetery page.)

Union Township is of archaeological importance because of ancient earthworks and burial sites, not of pioneers and settlers, but of the Adena/Hopewell mound builders, a people who flourished throughout the Midwest before the time of Christ.  The Great Mound in Mounds State Park is a kind of ancient graveyard as well as being the site for traditional ceremonies for a culture long since vanished before William Dilts started his "bed and breakfast."  Frederick Bronnenberg, Jr.,1812-1901, son of Frederick Bronnenberg, Sr., mentioned above, purchased the mounds area from John Martin who had been the first pioneer to enter the land.  Historian John Forkner gives Frederick Jr., high praise:

"A debt of gratitude is due Frederick Bronnenberg [Jr.]... During the many years he owned the property [what is now Mounds State Park] he kept the ancient earthworks from being obliterated by the plowman's share and guarded with jealous eye the handsome woodlands surrounding them.  To have stuck an ax into one of the stately elms or sturdy oaks would have been sacrilege in his estimation.  As long as he was the owner of these grounds, they were open to visitors and he took pride in the ownership of this mysterious and interesting place."

In 1929, the Madison County Historical Society acquired the park and transferred ownership to the Department of Natural Resources' State Parks Department.  The land along White River which encompasses the Great Mound and other ancient Adena/Hopewell earthworks became an official state park a year later.  However, Frederick Bronnenberg, Jr., must be considered the mounds' first preservationist.  Frederick Jr., and wife Hulda are buried at the Bronnenberg Cemetery.

The Union Township cemeteries that the MCCC is concerned with are the Bronnenberg, Clem/Benzenbower, County Infirmary/Potters Field/Poor Farm, Hurley (destroyed), Keesling/Ellison/NewKeesling, Old Bronnenberg (in the west part of Mounds State Park), and Otterbein/Makepeace/United Brethern.  On the 1876 plat map for Union Township below, the Bronnenberg, County Infirmary, Keesling, and Otterbein are represented with little crosses.  The mounds are also clearly indicated southwest of Chesterfield next to the "White" in White River.

Click here for a modern map of township pioneer cemeteries. 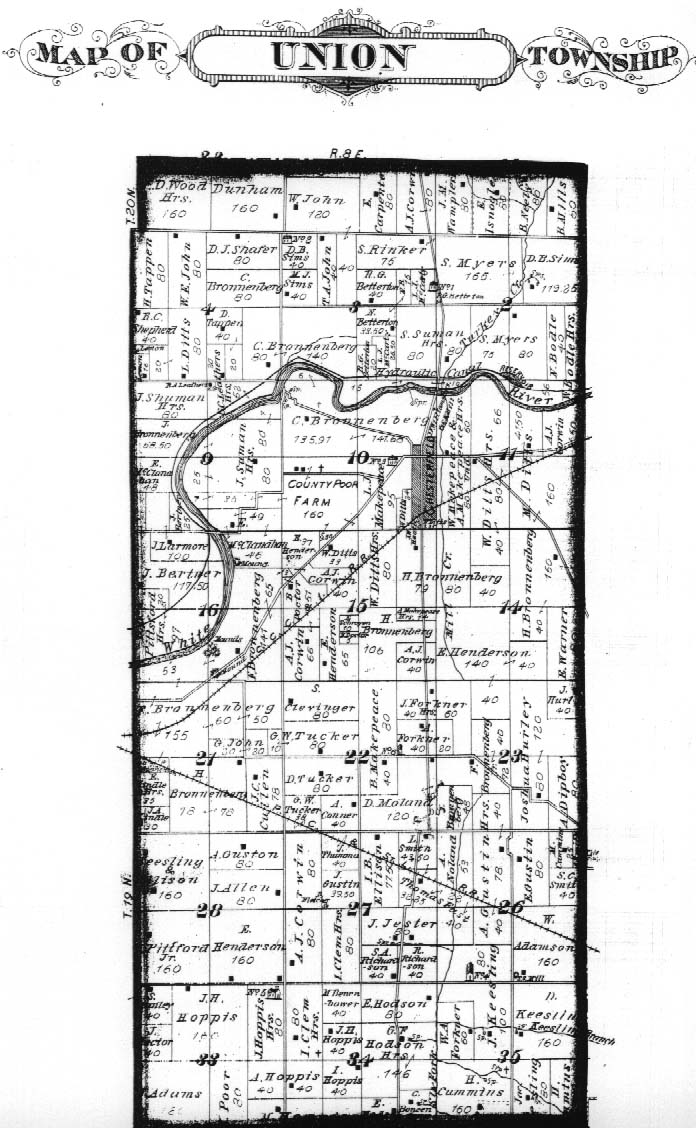