Listed on the National Register of Historic Places, the "Makepeace-Cornelius-McCallister House, 5 W. Main St.," is an excellent example of early Federal architecture.  The new owners in restoring it have retained the original floor plan and interior features.   A second Makepeace brick house sits across the road to the left.  It was not as fortunate: years ago, it was converted into apartments.  (Alas!) 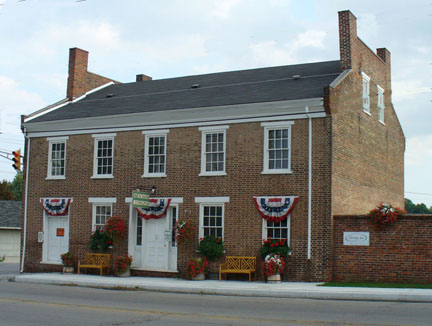 Built in 1850, the structure above was designed as both shop and home.  It was actually the first pharmacy--or "apothecary" as people in the 19th century termed it--in Madison County.  The shop was on the first floor at the front utilizing the two front doors and each side door positioned around the front corners.  The doors were elevated above street level on purpose.  This allowed customers to drive their wagons and buggies parallel to any door, stop, and obtain their medicines without leaving the vehicle; thus, this was Madison County's first drive-up, as well.  The new owners are using the Makepeace house as originally intended.  Their store Country Whispers is on the ground floor with their residence on the second.