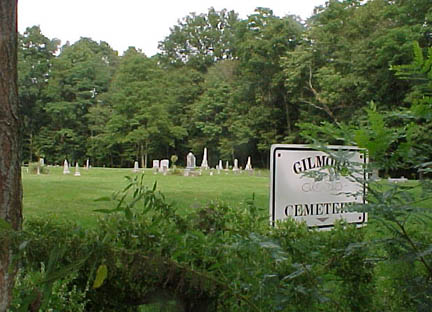 Beginning out of tragedy, the Gilmore Cemetery developed on the farm owned by Hugh Gilmore,1775-1834, whose large family had migrated from Virginia to southern Madison County in the late 1820s.  Hugh's wife Lucretia died suddenly in February of 1833 and so became the first burial in the ground that Hugh donated as a graveyard to neighboring settlers.  On April 20th of the following year, Mrs. Elizabeth Judd and Mrs. Morris Gilmore were killed when the team of horses pulling their wagon to church bolted down a hill and caused the wagon with occupants to crash into a bridge just east of the cemetery.  A year later, Hugh, himself, was killed while clearing trees in the cemetery, and he was buried beside his wife.  Over the decades, other members of the Gilmore family were buried here including Morris Gilmore,1808-1879, who in 1838 built the first brick house in the township.  (For a picture, go to the Adams Township page.)  The cemetery would eventually hold many of Adams Township's first important citizens. 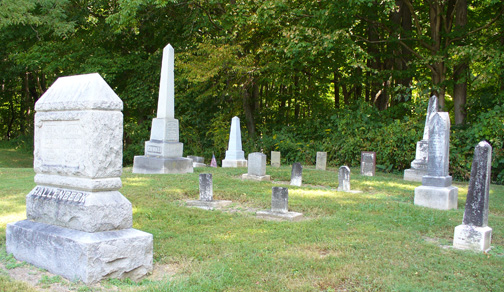 This more recent obelisk, center below, marks the Gilmore section, above.  The south side, left, of the stone commemorates Hugh Gilmore, 1775-1834, who donated the land upon which the cemetery was started and whose family sustained sudden tragedy shortly after settling the area. Hugh's wife Lucretia is recorded also.  Hugh's brother Morris, 1808-1879, and Morris's wife Elizabeth are recorded on the north side, right.  The Gilmore Cemetery is just east of Ovid/New Columbus on Gilmore Road (CR 625S).

Also buried at this location, now in an unmarked grave, is Col. Thomas Bell, 1791-1892, who was born in Kentucky and came by way of Ohio in 1828 to Adams Township.  He became a prominent and popular man in the frontier community.  He was chosen as the representative to the state legislature for eleven successive terms.  In fact, his popularity was such that only in one election was one vote cast against him.

The Nelson family stones, below, are all from the 1840s.  The white shaving cream smeared across their faces does no damage and helps genealogists read the blackened, mold-covered carvings.  At left, "In memory of John G. Nelson who died March 4, 1847 aged 70 years 1 month & 15 days."  John and relatives Archibald and William Nelson are listed in The Pioneer by county historian Samuel Harden as among the first to settle in the township.  John's wife "Mary D." has a Daughters of the American Revolution insignia, below center, next to her gravestone.  Evidently Mary descends from a Revolutionary patriot.  The couple's daughter Frances, below right, who died in July of 1846, is buried in the same row.

The McAllister family was also among the earliest of pioneer settlers. They came from Virginia to Kentucky and then moved on into Indiana, arriving in Madison County as early as 1828.  Thomas, Garrett, and William and their extended families carved out homesteads in the forested wilderness throughout Adams and Fall Creek townships, and their descendants became prominent, influential Hoosiers holding local and state public offices.  Many of the family rest here.

The McAllister family stones are in the row farthest to the west in the cemetery. At left, "Elizabeth wife of Garrett..."; Garrett's stone, center left, is barely standing up; relative John, center right, has a broken marker framed in aluminum; John's daughter Elizabeth H. has one of the earliest stones in the cemetery which is still very crisp.

The Fort family stones, below, are all from the 1840s.  In fact, Bartholomew's, right, has the distinction, at this point, of being the oldest legible original marker in the cemetery: "Bartholomew husband of Leah Fort died June 22, 1843 aged 35ys 24ds."  The stone in the center is that for "Leah wife of Bartholomew Fort died April 1, 1845 aged 31y 1m 9d."  At left is the gravestone for older relative Charles.  His marker, while not entirely legible, also dates stylistically from the 1840/50s.

There are two omissions in the burial list below involving the Cory family.  Sarah Ann Cory, right, is recorded as having died in 1853 at around twelve years of age.  Her two sisters, Rodah, left, and Eliza, right, also passed away in the 1850s.

At right in the picture above, Henriaetta, "daughter of  S.F. and A.A. Williams died July 8, 1852 aged 5 yrs 9 mns 8 d."  Her pretty mid Victorian tablet type grave marker has a carved, arched but faded motif at its top and four different fonts for the inscription.  Her parents' double gravestone is to the left.

The death of young wives was not uncommon in the 19th century.  Besides the perils of settling a frontier, then the most dangerous thing a woman could do was become pregnant.  Additionally, this era's lack of medical knowledge especially contributed to the demise of many females in their child bearing years.  The Gilmore, like other pioneer burial grounds, has an abundance of grave markers that read so-and-so "wife of..." with no accompanying marker nearby for a husband--who may have married a second time or moved on west.

Additional wives and daughters are below.

Jeremiah Hicks' Victorian-shaped stone has interesting symbols.  At the very top are the compass, ruler, and "G" elements of the logo for the Masons.  Underneath that and the rocks of burial is a hand pointed downward, holding a chain.  One of the links of the chain is separated from the others representing the member of the family chain who has passed away.  The American flags, of course, indicate service in the military.  Jeremiah "died Dec. 15, 1873 aged 33y 1m & 13d."

According to W. Lloyd Scott, first chairperson of the 1973 Madison County Cemetery Commission, the first gravestone transcription of the Gilmore Cemetery was done in the early part of the 20th century by Betty Devol.  The data was placed on cards housed in a soft file folder.  These records eventually became the property of Nellie Gray Hallowell, whose estate turned them over to Scott.  Along with the personal data from the gravestones, Ms. Devol included the memorial verses.  These short poems, lightly carved at the bottom of the stones, were popular with the Victorians but unfortunately were often obliterated by weather and time:

"How dark looks the World and how dreary

When we part with friends we have loved.

But there is Rest for the faint and the Weary,

And friends---Meet with loved ones above."

Has gone to Heaven to blossom there."

"We miss thee from our home dear Mother,

We miss thee from this place

A Shadow o'er our life is cast,

We miss the sunshine of thy Face."

"Sleep on dear Sull and take thy rest,

"When we at death must part

How Keen how deep the pain,

But we shall still be joined in heart

And hope to meet again." 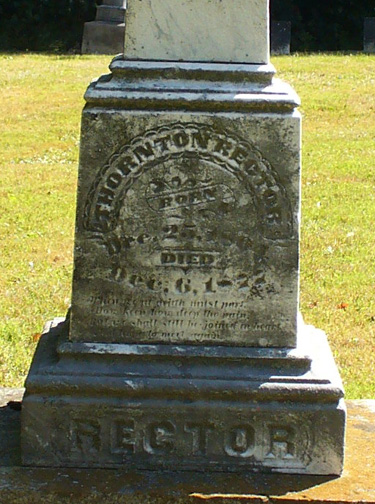 Modern historians and genealogists continue to be indebted to the unsung transcribers of the past--like Ms. Betty Devol.