The Perkinsville Cemetery is between two important elements in the early civilization of Madison County: the White River and South Bank Road.  South Bank Road was also called River Road, Strawtown Trace, and later Strawtown Pike; it is now named West 8th Street.  Those pioneers and settlers coming from anywhere east of the New Purchase had a choice of entering the open territory either by floating on rafts down White River or by walking with their ox-drawn wagons lumbering on the trails and traces bordering the river's banks.  South Bank Road, a foot path by modern standards, became the popular route of travel west, and it is hard to estimate how many hundreds of settlers moving into the New Purchase used this route in the early 1800s.

Because the land along South Bank Road was the most accessible, it was populated early and therefore contains a number of pioneer cemeteries.  The Perkinsville Cemetery is one of these.  This burial ground is southeast of and across the river from the hamlet of Perkinsville, which is on the north bank.  The burial ground is approached from West 8th Street; the beautiful hills on the north side of the road form the south bank of the river.  The old stones are at the west end, closer to Perkinsville; the new stones are at the east end.  The Perkinsville Cemetery is one of the largest and best preserved pioneer cemeteries in the county.  Some of the first settlers to the township and, indeed, to Madison County rest in its rows.

Another large family who remained is that of George, 1812-1876, James, 1815-1894, and patriarch Alexander, c. 1775-1848, McClintick/McClintock.  Alexander and his extended family helped civilize the wilderness bordering White River.  The McClintocks also have multiple generations represented in the Perkinsville Cemetery.  Alexander's first wife was Mary Kerr McClintick, who died shortly after arriving in Jackson Township.  Mary has a legible gravestone, left, which reads, "wife of Alexander, died Aug. 12, 1821, 43Y. 7M. 11D. "  The 1821 date of death makes Mary's passing one of the earliest in the county.  Her grave marker was installed by later descendants.  Barbara Wise McClintock, 1788-1846, whose stone is in the middle, was Alexander's second wife.   The picture on the right shows the gravestones of descendant Henry McClintock, 1844-1865, who was killed in the Civil War.  He has two markers, one from the government and one from the family.

In 2004, Margaret Likyns' simple stone, below left, was one of the oldest still existing.  Clearly legible, the stone records that she died, "Oct. 1830, aged 39 yrs." As of 2008, however, Margaret's stone as well as a few others of the family had succumbed to time and the elements.  In their place were the new stones, pictured below right. The Likyns/Lykins family is listed by historian Samuel Harden as pioneers to Jackson Township.  Their descendants evidently are proud of their heritage and are dedicated to preserving it for future generations.

Family members of other first land owners are represented above.  At left is the pillar for Martha Jane Cole who died in 1874 at thirty-six years.  In the oval is a hand, drooping in mourning.  It is holding a single link symbolizing the break in the family chain.  Relative Becknell Cole was an area merchant and helped lay out the village of Perkinsville.  In the middle is an interesting grouping for the Dyer family.  At right is a stele for James Lee.  There were three among the early settlers with that name: the patriarch who died in 1824 at thirty-one years old, a son who was only twelve when he died in 1853, and an adult who lived to be forty and died in 1865.

While pillars seemed to have been a very popular style of marker for many of those buried at the Perkinsville, tablets of various shapes are also abundant.  Josiah Auton's, middle,  states he died "April 6, 1830 aged 31ys. & 8mo."  While the script on Elizabeth's stone, right, is still very crisp, Mary Staple's data can barely be deciphered.  The clasped hands--the partnership of man and wife--in the oval represent her married status.  Mary was forty-one years old when she died March 25, 1845.

Buried at the Perkinsville is one of Madison County's first prominent citizens--Thomas L. Beckwith.  Thomas was born in New York May 24, 1815, and was brought by his parents Zenas and Mary to the Hoosier frontier in 1820.  At the age of fifteen he started working for Becknell Cole, an early merchant in Madison and Hamilton counties.  In 1836, Mr. Beckwith came to the Perkinsville area, and he and Cole laid out the plat for the village.  (For more on Perkinsville history, go to the Jackson Township page.)  Beckwith remained and began a successful business, selling general merchandise.  The business lasted for forty years.  Thomas was also Perkinsville's first postmaster, a position he held for almost as long.  He also farmed the land and raised stock.  Between 1840 and 1850, the days before railroads,  Beckwith would purchase large herds of cattle and hogs and drive them to the nearest market--Cincinnati.  He was president of the Anderson/Perkinsville Turnpike Company until its completion, township trustee for two terms, county commissioner for one, county treasurer, and a candidate for the state assembly.  In his later years, he was instrumental in organizing the "old settlers' meetings," as historian Samuel Harden refers to them, in Perkinsville.  There were, in fact, no such meetings held in the local area after Beckwith's death in 1878. Thomas Beckwith's home and store are pictured in the 1880 History of Madison County, Indiana, page 110. 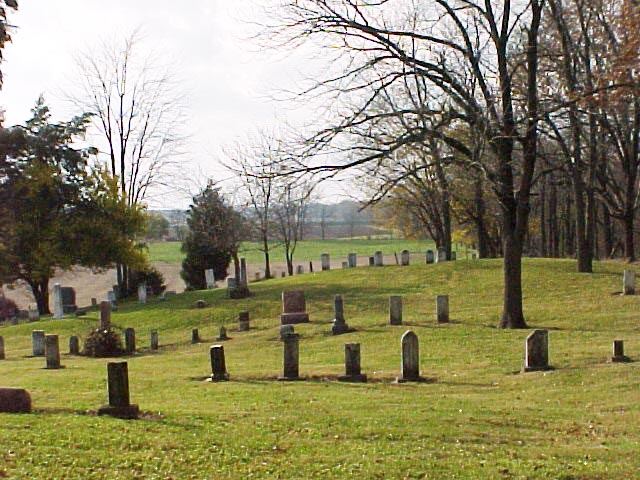