Located on Sly Fork in section 10, the northeast corner of the township, the Capp-Tucker Cemetery was one that gave specific confrontational problems to earlier Madison County Cemetery Commission members.  Esther Dittlinger in the July 1981 Madison County Historical Gazette explained the situation:

"The man who purchased the surrounding land thought he owned the cemetery.  He had a bulldozer dig out the front part and had many stones moved to the rear.  Family members who had loved ones buried there tried to enter the cemetery, but a dog warned them of danger.  The trustee went out to see...and explained to the owner that he did not own the cemetery.  His [owner's] reply was that if the cemetery was not used for 100 years he could take it over.  Proof was submitted to him that a veteran was buried there less than 100 years ago.  Other family burials have been there since 1900."

The Capp-Tucker Cemetery was soon restored and remains a pivotal success story in the MCCC archives. 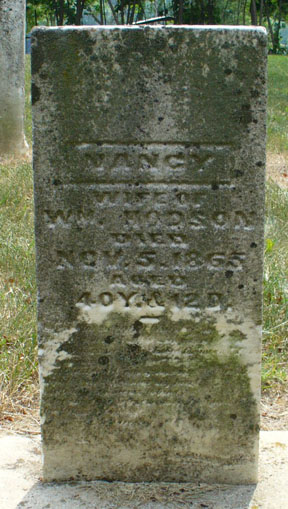 One of the first pioneer families to Adams Township rests at this location.  The Hodson family was originally from North Carolina; they had migrated to Ohio and lived there for a short time.  Brothers Eli, 1805-1880, George, 1802-1876, and Isaiah, 1803-1853, came from Ohio in 1828 with their father, George, Sr., mother, wives, and children. Eli Hodson was elected associate judge in 1846 and county commissioner in 1860.  Historian Harden provides a glimpse into the character of this early official: "Eli was raised a Quaker but later joined the Christian Church.  In his [Eli's] death the county lost one of its best citizens.  In public life he was honest and sincere, a true friend, jovial and well informed on all subjects."  Most of the Hodson family is on record as being buried at the Capp-Tucker Cemetery.

Another early "mover and shaker" to the southern part of the county is also interred here.  Andrew Bray was born in 1804 in North Carolina.  He and his parents left that state and arrived in the southern part of Madison County in 1828, possibly having migrated with the Hodsons.  In 1832, Andrew purchased from William Collins twenty-five acres on the north bank of Fall Creek in Adams Township east of New Columbus in section 17 and began a farming enterprise. Additionally, he opened his first distillery in 1838.  Andrew eventually amassed 740 acres and for some time was considered the wealthiest man in Adams Township.  According to Harden, Mr. Bray often enjoyed flaunting his wealth.  Especially at auctions, Andrew would brag, "Why don't someone buy Andrew Bray?" at which point he would answer his own question with "No one able." Harden also explained that Bray had to keep quite a bit of money at home because Madison County did not have any banks in those early formative years.   As a sign of wealth,  Mr. Bray built in 1856 the first two-story brick home in the southern part of the county.  Federal in style, its size and proportions made this house seem "simply palatial" by Harden's standards. (For a picture, go to the Adams Township history page.)  Besides being a successful farmer and businessman, Andrew Bray was also a community leader.  He was a justice of the peace for Adams Township for thirteen years.  He joined the Christian or White Chapel Church in 1849 and in 1865 attended a sanitary meeting at Anderson where he contributed  substantial funds for improvements.  Andrew Bray died in 1865, leaving behind a wife and two sons Frances M. and Archibald.   His funeral was preached by Elder L.H. Jemison, and Mr. Bray was buried at the Capp-Tucker Cemetery, which is just northeast of the brick home he built and the land he owned.

Above are four stones representing the Tucker family for whom the cemetery was named in part.  The "Tucker family" is listed by Harden as early settlers to Adams Township. Top left is patriarch John Tucker who died in 1845/55 at "90yrs. 1mo. 24ds."  His wife Sarah, top right, died in 1866 at seventy-eight years of age.  These top two stones were done in a soft white marble; the bottom two are in brown granite.  Andrew Tucker, bottom left, died in 1844 at seventy-six years.  That would make his birth year circa 1768. Levice/Lusiva Tucker, bottom right, died at seventy-two years of age in 1843. 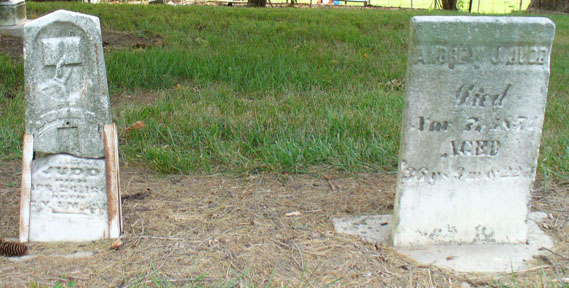 The Cummins family is also represented here. They lost four adolescents, three of whom died within three years of each other.  Joseph Cummins, left, died in 1862, followed by Sarah and Nancy, both of whom died in 1864.  Relative Woodson Cummins, right, lived to be only sixteen when he died 1855.

Below are the stones for the Canaans.  Stylistically from the Edwardian Period, the turn of the 19th century, the stone cylinders became popular when the Victorian up-right tablets went out of fashion and rectangular blocks, closer to the ground, came in. 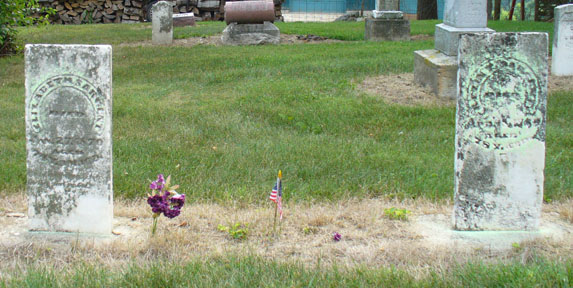 The Capp-Tucker shelters the remains of a notable early American veteran.  Reason Sargent (also Rezin Sergeant) was born in 1791 and died in 1869.  He was a soldier in the War of 1812.  He is listed in the American Legion's Cemetery Record of Deceased Veterans.  He married in 1818 Elizabeth Adams who was born in 1796 and died in 1870.  She was a daughter of Abraham Adams for whom the township is named, and she is buried here next to her husband.

Below are two vastly different grave markers demonstrating the extremes in 19th century life styles.  The one on the left is not just an inconvenient rock, but a field stone.  Field stones were used when the family could not afford a professionally cut grave marker.  Another possibility is that the marker was needed before there was a stone cutter available in the area.  The latter would indicate a truly early grave.  Generally, a large rectangular slab was chosen from off the farm property.   (For more pictures of these, go to the Jones Cemetery.)

In contrast on the right is the elaborate and expensive, for the time, wrought-iron fence defining the grave of one of the Hodson's children.  Wrought-iron was used for fencing in the latter half of the 19th century.  (Another example can be seen on the Otterbein Cemetery page.)