Sometimes a pioneer cemetery does not need a complete reclamation as the Cottrell or even restoration as the Weddington, but just a lot of general repairs: stones reset, broken grave markers pieced together, new foundations, cleaning of fence boundaries, trimming of interior trees, etc.  This was the case of the Otterbein Cemetery.  This pioneer graveyard was still intact and fenced, but since it had been vandalized various times in the 20th century, many of the stones needed fixing.  This type of work is also part of the Madison County Cemetery Commission's job: to step in and help the township trustees when the problems and finances of repair work are overwhelming.

The first step the MCCC takes in a general cemetery "face-lift" is to mow the area, trim interior trees, and clean the fence boundaries.  Contractors need to be extremely careful and concerned enough for this special work in order not to run over or damage with any machinery the stones lying on the ground.  Larry Brown and Herb Justice were up to the task.  To their credit, much of the clearing was actually done by hand.  The picture above on the left shows the Otterbein in tall grass.  The cemetery looks like a field.  The picture above on the right shows the same area after mowing. The two views below show the stones covered by heavy undergrowth, left, and then the same shot, right, after clearing the fence line.

With over 200 hundred burials listed on the records, the Otterbein's refurbishment w 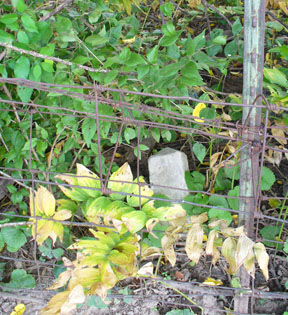 as no small undertaking.  The stones themselves presented myriad problems.  Some markers just needed re-calking, others needed new foundations, some stones needed actually pieced together, many needed to be reset in their sockets, a number of them deserved new aluminum supports, and some large markers would need special equipment for hoisting into place.  Of course, many individual stones presented a combination of these problems.  Additionally, the cemetery's fence was so heavily overgrown with brush, weeds, and small trees that an entire row of grave sockets was completely hidden.  When the fence line had been cleared, several grave stones were actually discovered outside the boundary of the cemetery.

Once the area has been mowed and the boundaries cleared, the next step is to probe for stones hiding under years of  dirt and grass clippings.  Madison County Cemetery Commission members Melody Hull in red, John Brundage in blue, and Ranny Simmons in gray search the area around existing sockets.

Once stones have b 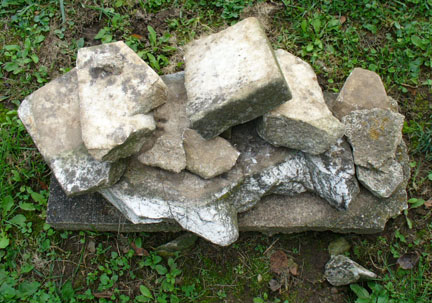 een located, then a list is made of the different kinds of repairs needed and the number of stones in each repair category.  Weather conditions often determine which repairs are done first and in what order.  In the Otterbein's case, the easiest work was tackled during the nice conditions of early October.  Certain stones could be repaired on site with the newer type  of epoxy and reset within the week.  In fact, the newer epoxy makes the stones stronger than the metal frames used for resettings done in the 1960s and '70s.  Some of the stones pictured below show the reddish-brown rust marks along their edges from the old framework.

Columns present special problems.  Not only may they be in pieces, but very large pillars and columns might have to be hoisted into place using heavy equipment.  The columns and pillars below, fortunately, could be re-erected without that additional complication.

However, these large pillars, above, in the Suman family section were too heavy to move by any other means than special equipment.  This type of work is usually done after all the other smaller stones are found and finished.  A dry day when the earth is already packed hard is preferable so that the ground is not torn up by the vehicles.  The picture left is before, and right is after.  The shot below shows two other heavy remountings.  The one in the foreground is the replaced column for another Suman stone. The one in the background is the restored Hurley stone. 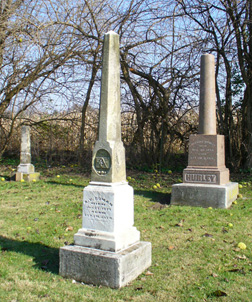 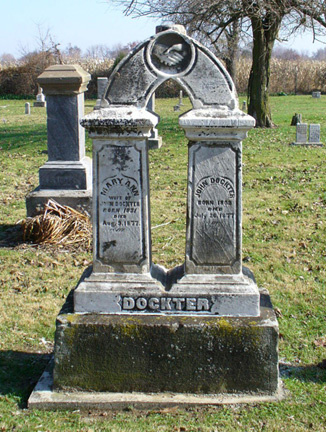 Many simple tablet type grave markers had in mid 20th century been reset in a new foundation of cement--state of the art at that time.  The stones had then been broken off by vandals.  Contractors Larry and Herb used various repair methods depending on the needs of the particular grave marker.

The two oldest, legible stones still existent at the Otterbein are pictured above after resetting: James Lonsdale who died September 8, 1842, and Susanna Shroyer who died May 7, 1840.  From the gravestone transcriptions made by Fred R. Davis in 1949 and the Daughters of the American Colonies in 1959, MCCC members know that the earliest burials at the Otterbein were those of Mary Noland who died in 1825 and her husband Daniel who died in 1829.  Their stones, like many other very early grave markers, have been completely lost. 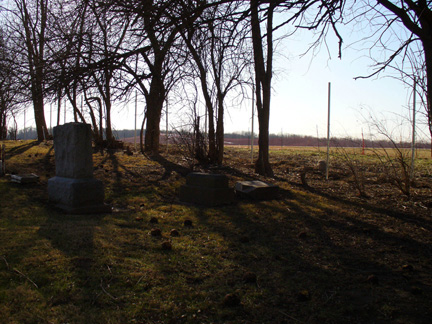 Independent of the MCCC's project, the Anderson Municipal Airport erected new fencing along its boundaries.  Since the Otterbein and airport share an east-west border, the airport's new installation helped clear one side of the cemetery's undergrowth.

With the first burial in 1826, the Otterbein continued to be used well into the 20th century.  Descendants of the pioneers, later settlers, and Chesterfield residents buried here still mark their families' graves as can be seen in the foreground of the photo above. Go to the Otterbein Cemetery page and the Union Township page for more history and information.