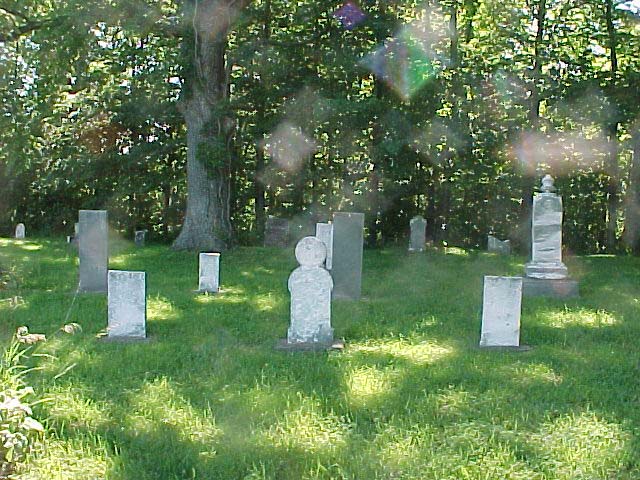 Spangles of sunlight grace the Jones Cemetery in Green Township.

The Jones family for which this cemetery is named came from Virginia around 1830 to the area near Lick Creek. Patriarch James Jones, c. 1798-1863, Isaac W., and Wesley are listed by Madison County historian Samuel Harden in his book The Pioneers as among the first land owners in Green Township.  Isaac W., 1827-1897, was four years old when he migrated with his father James, his family, and other relatives.  As an adult, Isaac married Susan Boone, daughter of Ovid Boone, another early settler.  Their children were Mary R., Florence M., and Willie.  Isaac was elected county commissioner for several years, and after spending his youth and adulthood in the rural township, he and Susan, as seniors, moved into the city of Anderson.  Eventually, the Jones Cemetery would hold over thirty-five descendants of the Jones extended family.

Below left is a view of a Jones family section at their cemetery; right is a close-up of James Jones's stone.

A Madison County settler born in the 18th century was Morris Davis, c. 1767-1856.  His broken stone, left, is near the marker, right, for Tensley Davis, c. 1827-1863.  The shaking hands at the top of Tensley's stone symbolize the partnership between husband and wife.

Above is another view of the cemetery which features founder James Jones's square pillar.