Stony Creek Township is named after the little stream that runs through it.  As related in several history books a group of families came in 1823 to the present site of Fishersburg: Benjamin and John Fisher, D.E. and H. Studley, John Anderson, and George Reddick.  However, a 1903 Lapel newspaper credits  Benjamin Fisher with arriving in 1820.  This date would make Benjamin a contender for the second settler in the county.  His rivals would be Jacob Hiday in Green Township and William Dilts in Union Township.  John Rogers in Fall Creek Township is acclaimed the first in 1818.  Other settlers to Stony Creek in the 1830s were James and Jesse Gwinn, W.A. Alred, Thomas Busby, Arbuckle Nelson, and John McDole and their families.

Today, Fishersburg and Lapel lie across SR 32 from one another.  What with 20th century development, the once neighboring hamlets have the appearance of one contiguous community.  However, Fishersburg, on the west bank of Stony Creek and adjacent to Hamilton County, was the first of the two villages to be laid out May 10, 1837, by Reverend Fletcher Tivis, and it was named for  Benjamin Fisher who was a veteran of the War of 1812.  Benjamin has the distinction of being one of the few white settlers actually killed by the Native Americans remaining in the area.  An article titled "Early Settlers" from an unidentified Lapel newspaper published in October 1903 tells of the family's migration to Stony Creek and the events which brought about Benjamin's death:

"Mr. and Mrs. Benjamin Fisher, from Clermont County, Ohio, in June of 1820...in a wagon came to Indiana.  They drove through Winchester to Anderson, Indiana, the latter place being then merely an Indian Village, with no white people living there.  The old chief Anderson, for whom the town was named, was living there at the time.

"They drove down the river...between Perkinsville and Strawtown and there settled in a round log cabin 16 feet square, in which was no floor but the dirt.

"In Strawtown...was one white family named Shintapper.  This man kept liquor to sell to the Indians and when they bought the liquor and got drunk Shintapper would abuse them.  He had a great fireplace in which logs six feet long could be burned and he once threw an Indian on this fire where he was burned to death.  At another time he burned one until he was crippled afterwards.

"By such treatment the Indians were justly incensed and determined to be revenged and so ten of them went one day armed with their knives and tomahawks, intending to kill Shintapper when no one was about.

"That same day--in March, 1821--Benjamin Fisher, John Colip, and Jacob Hiers happened to go to Shintappers to grind their axes, he being the only one in that settlement who owned a grindstone.  They had not been there long before the Indians arrived.  Of course they could not stand by and see Shintapper killed so undertook to defend him.

"There was a five-rail fence around the cabin, outside of which were the Indians and inside were the white men. ... The battle then continued as at first, the red men retreating and the white men chasing them, then in turn being chased back.  Finally one Indian hit Shintapper with a club and knocked him down, then jumped on the fence to get inside.  At this Hiers struck the Indian on the head and killed him...Then the battle waged fiercer than ever.  But when retreating from the Indians Benjamin Fisher fell and was at once tomahawked by the Indians, who then gathered up their dead Indians and went away.  Mr. Fisher was not scalped as some accounts have stated but from the pieces of skull (now in possession of [son] Charles Fisher) it is evidenced that he was truck several times with the tomahawk.

"That same night Shintapper loaded his goods in a canoe and with his wife and child went down White River and was never heard of again.  Benjamin Fisher was buried at Strawtown near where he was killed. His was the first grave in what is now known as Strawtown Cemetery."

The article also tells of another dangerous encounter with the local Native Americans which Benjamin's wife had some years later at the family's Hoosier frontier homestead:

"The Indians used to be daily visitors at their [Fisher's] house. His [son Charles'] mother had a large pewter basin that held about two gallons; in this she would put a generous quantity of milk, break in bread and putting down as many spoons as there were Indians, let them seat themselves on the floor around the bowl and eat.

"One time four of five Indians came, one or two of them being the worse for liquor.  Mrs. Fisher was sewing with the children playing about her.  The Indians asked for food.  She told them that she did not have any.  At this one of the drunken Indians took hold of her hair and taking out his long knife, run the back of it around her head saying, 'me scalp white woman.'  The two older children ran out to call in a man who was chopping nearby, while young Charles darted under the bed.  When the man came in from outside, he reached up and took down one of the guns in the cabin, when the Indians run out, mounted their ponies and rode away."

Fortunately, attacks by Native Americans in the Madison County wilderness were actually rare, so much so that the one or two violent acts remained memorable in settlement history.  As related in the Lapel newspaper article, happier times, although difficult by modern standards, were also part of the Fisher family frontier lifestyle in Stony Creek Township:

"As a child Charles Fisher remembered the place in the forest, about 150 yards from the house, where his mother went regularly twice a day in secret devotion.  She took him with her leading him by the hand.  Later,  she...moved upon the 80 acres where David Conrad now lives.  She still had a place by a big oak tree near the cabin, where she went twice a day to pray, as long as she lived.  Mr. Fisher [Charles] says that this has left an impression upon his mind that has always remained.

"...After he became a young man he paid his respects to Lucy Jane Busby, and in September 1840 they were married by Lucien Emmons, a Methodist preacher, both of the young people being members of that church.  They lived with Mr. and Mrs. Busby that  winter.  During which time Mr. Fisher cleared 7 acres of timber land...for which he received $14.

"In the spring they had one small horse, one cow, 2 hogs.  They made about 200 pounds of maple sugar, which they sold for 4 cents a pound.  They bought a cheap set of knives, forks and plates, one teakettle, one stew pot and one frying pan and with this modest outfit started housekeeping.  They needed no stove--there were none in the country then, all the cooking done before the fireplace.

"Everyone was his own shoemaker in those days.  They tanned their own leather and though the shoes were not fine to look at, they wore well.

"Mr. Fisher tells how the houses were lit up, as he first remembered it.  The children would pull shell bark off the hickory trees, put it in the corner and light it.  Later on they would take the top off a turnip, scrape the inside out, put in a stick with a rag wrapped all around it, then fill the turnip with coon oil.  When the rag was lit it gave a very good light.

"Mr. Fisher early allied himself with the Democratic party... believes in respecting the political and religious opinions of others...and cast his first vote in 1844 for James K. Polk, who was running against Henry Clay, the Wing candidate.

"Mr. Fisher has a number of relics of the past, among them being a large powder horn that was carried by his grandfather through the Revolutionary War and later by his father in the War of 1812.  Where it rubbed on their side, while being carried, it is almost worn through.  It is made of a cow-horn, and has a wooden cork that screws in.  On the horn is carved pictures of birds, etc., with his father's initials.

"He also has...a lock of his mother's and of his grand-mother's hair."

Mr. Charles Fisher--son of Benjamin for whom Fishersburg was named--eventually became Fishersburg's first merchant, postmaster, and one of the township trustees.  He was proud of saying that he was the first person to drive a team and wagon over the Pendleton-Strawtown Road in 1832.  He died in 1913 at ninety-three years of age and is buried at the Woodward-Gwinn Cemetery.

With the coming of the railroad in the 1870s near Fishersburg, the landscape around the village changed.  The Anderson, Lebanon & St. Louis Railroad needed a station at the crossing of the Pendleton-Fishersburg Pike three-quarters of a mile southeast of Fishersburg.  To that end, David Conrad and Samuel E. Busby laid out the town of Lapel April 27, 1876, and Lapel eventually became the larger, more developed community. The name of "Lapel" was given to the town by Samuel Busby because the strip of land between the railroad and the turnpike, where Lapel is located, was shaped like the lapel of a coat.  Conrad and Busby are both buried at Brookside.

Stony Creek Township has four pioneer cemeteries on record today: Brookside/Lapel Town/Fishersburg/Old Lapel, Ellingwood/Fisher, Hidden (destroyed), and Woodward-Gwinn.  This last one is the only one marked on the 1876 plat map below. 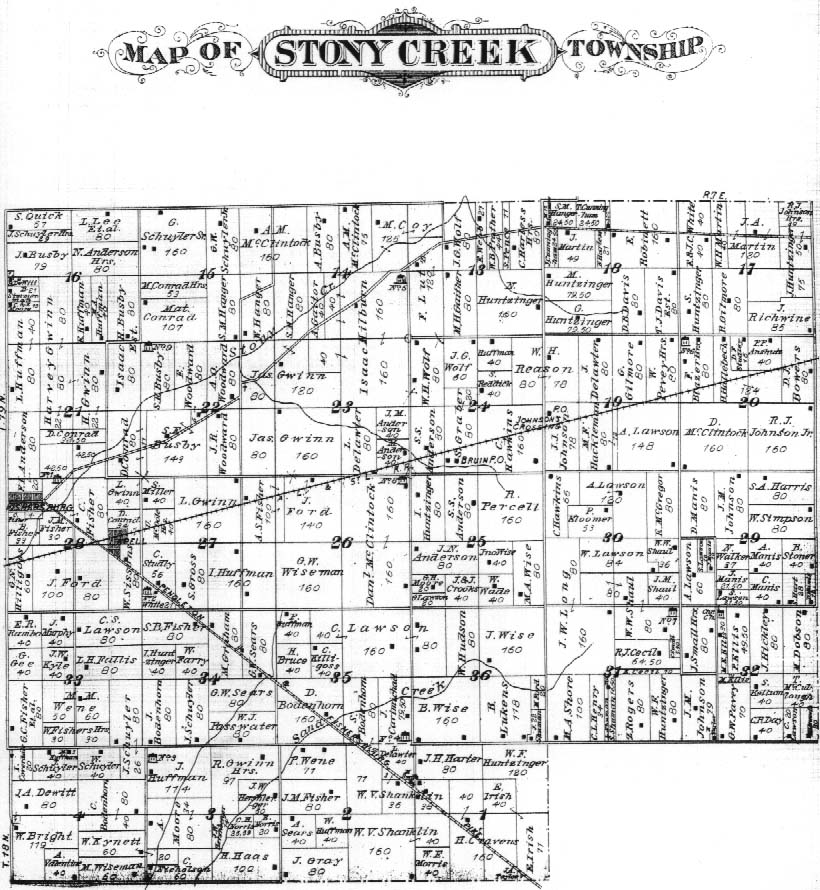