Jackson Township is in the middle of the western boundary of the county.  It was named after Andrew Jackson who was President of the United States from 1829 to 1837.  Two families traveled together to live for a short time along the White River in this area, the Kinsers and the Deweys in 1821.  Neither purchased land, however.  That same year, Benoni Freel became the first homesteader.  He arrived from Ohio, bought and cleared land opposite the Perkinsville site, and built the first dwelling.  Pioneer settlers who also planned to stay followed in 1822:  Daniel Wise, George Cunningham, Robert Blair, David William, and John Montgomery.  The latter originally entered the land in 1823 where Perkinsville is located.  By 1825 James White, George, James, and Alexander McClintock, Thomas Forkner, John Connor, Sr., and others had made homes in Jackson Township. (For more on Wise and McClintock, go to the Perkinsville Cemetery page.)

The village of Perkinsville along the north bank of White River on the western border of the county provided area settlers with a community center and more importantly a mill for their produce.  Perkinsville was laid out August 1, 1837, by Becknell Cole and James and Thomas Beckwith.  (For more on T. Beckwith, go to the Perkinsville Cemetery page.)  They had meant to honor William Parkins but incorrectly recorded the plat as "Perkinsville," not Parkinsville.  William Parkins deserved the honor.  He and his wife and seven children in the fall of 1825 were the first family to live at this location.  They initially lived in a tent in "one vast, unbroken wilderness of heavy timber and thickly matted underbrush [with] no roads except Indian trails."  Within several weeks, Parkins had constructed a rough log hut for his family.

As the area began to be populated, Parkins became a leader in the pioneer community.  He was a member of and local preacher for the United Brethren Church.  He preached the first funeral sermon in the township when a young man was killed by the falling of a burning tree.  He was also the first blacksmith in the township.  Parkins was a "hackle-maker by trade" and so provided "all kinds of smithing," or basic metal works, including table forks for the settlers.

More important, perhaps, to the development of the entire township was the mill he built shortly after arriving.  The land in Jackson Township is fertile and local farms produced abundant crops.  The nearest mill in the early 1820s, however, was fourteen miles away at Pendleton, and there were no roads or bridges leading there.  Seeing the necessity, Parkins erected a small hand mill made of round polls and grind stones of local limestone.  While the mechanism was very primitive, the mill, turned by shear muscle power, would produce a good quality corn meal at the rate of one bushel an hour.  Settlers could then convert their harvest into a usable commodity.  With more settlers arriving, the hand mill soon became inadequate.  Rising to the occasion again, Parkins constructed, with the help of other settlers, a dam made mostly of brush across White River opposite the area where Perkinsville now stands.  The river provided excellent water power to operate the "mill run."  He built a log millhouse and actually had two runs--one for grinding corn, another for wheat.

Perkinsville’s namesake, a man of ingenuity and varied talents, died suddenly in 1839 while in Strawtown in Hamilton County.  He may actually be buried there in the Strawtown Cemetery since he is not on record for any of Madison County’s cemeteries.  William Parkins’ wife Mary is interred with a legible gravestone at the Perkinsville Cemetery.  Their children, who reached adulthood,  all married and can be found on census records for Madison, Henry, and Tippecanoe counties, and as far west as Kansas.

Of the seven cemeteries on record for this area, five of them are along White River or the old pioneer trail that runs along its south bank; the trail is now called 8th Street/8th Street Road/West 8th Street.  These cemeteries are the Cather, Cunningham, Hamilton/Epperly/Moore, Perkinsville, and Robinette.  The Neese, and Roger/Richwine (destroyed) are located in the northern half of the township.  A main thoroughfare for early Madison County pioneers and settlers, South Bank Road, or 8th Street, allowed access to the rich valley bordering White River, and so this strip was one of the earliest areas to be settled and therefore has many pioneer cemeteries.  White River, another "highway" for travelers, has steep hills on its banks for most of its length. Hills, impossible to plow and "closer to heaven," were traditional locations for the cemeteries of 19th century settlers.

In connection to the Native Americans of the Lenni Lenape/Delaware tribe who lived along the White River in Delaware, Madison, and Hamilton counties, one of their villages is recorded as existing close to the river's south bank somewhere in Jackson Township's section 1 or 2.  This village was called Nancy's Town by white settlers in reference to Chief Nanticocke.  The exact location is not pin-pointed, and the village does not seem to have had the same importance as those of chiefs Anderson, Killbuck, Pipe, and Munsee.  However, it is indicated in Charles Thompson's 1937 biography Sons of the Wilderness: John and William Conner. 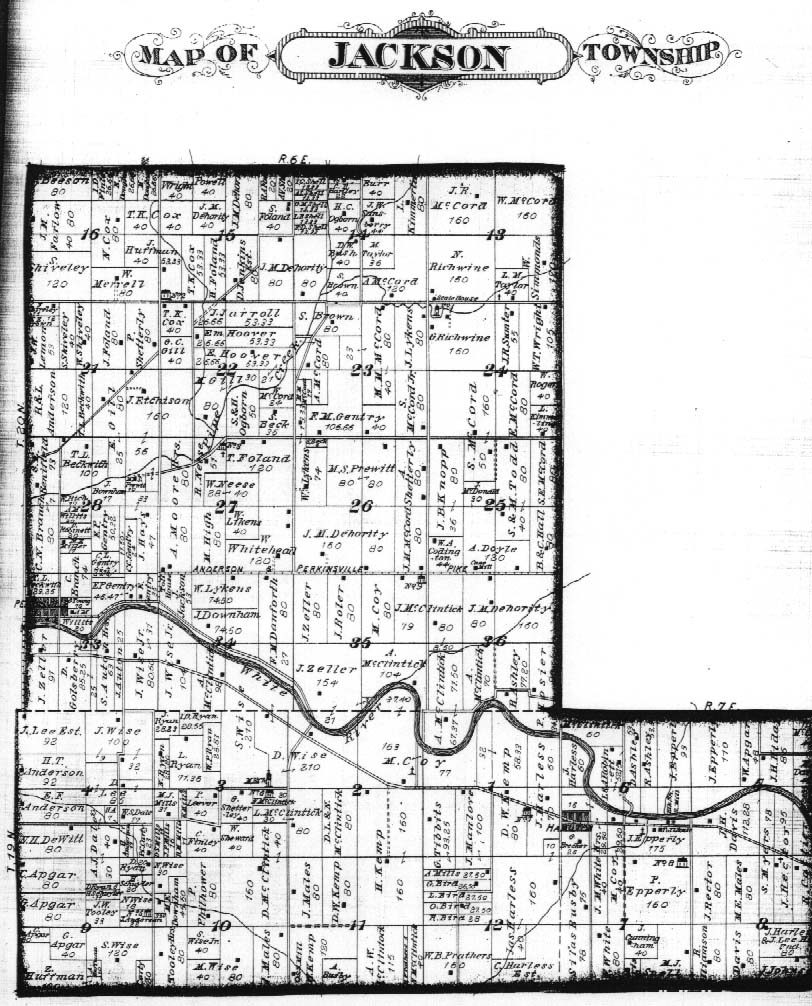