The settlement of Madison County begins in this township. John Rogers came to the falls on December 29, 1818, and settled on land one-half mile east of present-day Pendleton.  Around a year later, Judge Stanfield and a Mr. Burras settled north of Pendleton.  The first large influx, though, was in 1820.  In that year, a large group of family men traveled together from Clark County, Ohio, to make land claims: William Curtis, Thomas and William McCartney, Israel Cox, Saul Shaul (see Mt. Carmel Cemetery page), Manly Richards, Moses Corwin, and Elias Hollingsworth.  After selecting their acreage, the men returned to Ohio and "brought out their families, traveling with four pack horses and a wagon drawn by a team of oxen.  The wagon was doubtless the first ever brought to the county."  These farming families set up homesteads in the falls area.

The one exception to this scenario was the Hollingsworth family.  Mrs. Elizabeth (Curtis) Hollingsworth traveled with her husband Elias on the initial trip and so is considered the first white woman in Madison County.  With the parents was five year old son James, who as an adult would become an influential leader in both Lafayette and Richland townships.  (For more, see Lafayette Township page.) The Hollingsworths also garner the distinction of having the first white child born in the township; son "E.P." arrived on November 7, 1820.

Other pioneers settled their families in the falls area over the next two years: Conrad Crosley, Adam Dobson, William, Isaac, and Henry Seybert, Thomas and William Silver, Nathanial Richmond, and Adam Winsell.  Adam Winsell was one of the first associate judges at the time of Madison County's legal recognition in 1823.   Not far behind these were the families of Enos Adamson, Isaac and Thomas Busby, James Irish, Thomas Bell, Dr. Henry Wyman, and Thomas M. Pendleton for whom Pendleton is named.  Along Fall Creek there resided a total of fifty families by 1825.  As most histories emphasize, "On every hand they were surrounded by dense forests... There were no roads, no mills...no modes of transportations, save the ox-team and pack-horse and occasionally the canoe."

The year 1821 saw the first marriage and the first deaths.  Stephen Corwin and Miss Hannah Ellsworth were wed, and Stephen had to travel on horseback to Connersville to procure the marriage license since Madison County was not yet legally organized.  Another couple, Mr. and Mrs. Martin, were the first deaths.  They were "stricken with fever" in the fall of 1821 and believed to have died about that time.  Their bodies were not discovered for several days, and according to historian John Forkner, "...the fact that the victims died unattended cast a gloom over the little settlement, where it was part of each man's religion to minister to the wants of his neighbor in times of sickness and distress."

Among these early settlers to Fall Creek Township was a rather unique character--Moses Whitecotton.  Mr. Whitecotton was one of the first justices of peace for the community.  His uniqueness, however, comes from the fact that he was a natural poet, preferring to write in rhyme rather than prose.  He even kept his court docket in verse.  He was a neighbor of first settler John Rogers, and once when in difficult circumstances wrote this appeal to his pioneer friend:

"My family is sick, and with nothing to eat,

I pray you the loan of two bushels of wheat;

This favor, if granted, shall ne'er be forgotten,

As long as my name is Moses Whitecotton."

John Rogers responded to his friend's needs, and Moses, in turn, wrote this promissory note with a different rhyme scheme:

"One day after date I promise to pay

To old John Rogers, without delay,

One hundred weight of hemp

When I make it and break it,

One dollar I shall not deny;

Witness my name this 4th of July.

While the court records in rhyme have disappeared (argh!), Whitecotton family members and descendents can be found in the Mt. Carmel and Beech Grove cemeteries.

Thomas M. Pendleton, understanding the importance of the falls, had settled nearby, entering possession of his land on June 3, 1823.  The immediate falls area continued to attract a large percentage of the early settlers, so much so that the locality had the appearance of a town long before it was actually legalized.  It was Thomas Pendleton who on January 13, 1830, actually founded the town by having his property surveyed, organized into lots with streets, and recorded with the county.

In a letter dated November 10, 1895, to historian Samuel Harden, Caroline Russell remembers when she, as a little girl with her family, arrived in Pendleton in the year 1830:

"As we drove up the hill he [Caroline's father] said here is Pendleton.  I looked to see the town....  [There] was a a large double log cabin, owned and occupied by Major McCartney, son-in-law of old Mr. Pendleton, for whom the town was named.  On the east side of the street was another log cabin, in one end of which a school was taught...  On the west side of the street...was a small log house, used and owned by a man named Arch Joyce, in which he kept a grocery, with some whisky, which was generally well patronized every Saturday afternoon, and generally ended in a fight, and the next house was ours.   [Then] the brick store was built and owned by my father...

"We had no drinking water in the place except what was brought either from what was called the 'Spout Spring,'...or across the creek from a spring...  There was no church in the place, but services were held in the room where school was taught...and the first [church] was round logs, just a cabin.  There was not a fence of any kind in the place, and no sidewalks.

"Soon after we had moved there the citizens began to talk of a public well...  A man named Adam Anderson was hired to dig it, and at the corner of the brick store of an evening they all sit around, and the hat would be passed to collect all that was given to pay the well digger the next day, and if there was not enough, Mr. Anderson would wait until the next evening, and the well was covered up.

"The large double cabin where Major McCartney lived...was used as the court-house, for the county seat was then in Pendleton, until 1834, when it was moved to Anderson, at which place there was no court-house either.  Major McCartney's family being a large one, they had beds in both rooms, but they were taken down while court was in session.

"[For our] school-house, our seats were slabs and boards, some wide and some narrow, and the children with different kinds of books.  Generally a class would consist of four; not more than that.  Children came from farms adjoining the town... It was then thick woods to town from [anywhere].

"Colonel Abel Johnson bought the corner lot next to Mr. Mingle, upon which he had a small hewn log house put up, into which he put a small stock of goods, so then there were two stores in the town of Pendleton....

"Thomas Silver had come to Pendleton and traded for the falls mill and other lands near there...upon which he had another mill built.  Mr. Silver sold the mills to Samuel Irish and his father, May 31st, the next year after we moved there [1831]."

Caroline Russell was seventy-five years old when she died February 10, 1899.  She is buried in West Maplewood Cemetery.

The falls were first used for milling in 1821 when William McCartney built a corn mill there.  McCartney "dressed the stone and arranged the machinery himself."  He also established a store and trading post at the falls.  To his fellow settlers he provided basic necessities; to the Native Americans he traded beads, brooches, and tin ware for furs and hides.  In 1825,  William and his brother Thomas expanded and built a log mill on the south bank just below the falls.  This was a highly successful venture since the mill eased many settlers' burden of converting rough timber into useable lumber.

Around 1828, Thomas Silver erected a frame mill, using the water from the dam located up the creek.  While an improvement over McCartney's grain mill, Silver's mill was still "primitive in all its appointments, consisting of a 'corn cracker' and a run of buhrs for grinding wheat.  The wheel was the usual old-style central discharge water-wheel." Thomas Silver is buried in the old section of Grovelawn.

At the falls area, other milling operations were eventually added including those for wool, flax, and "planing," and in the last half of the 1800s turbine engines greatly improved production.  By mid 20th century, though, the falls area on Fall Creek was refurbished and converted into a beautiful city park--a basic necessity of a different sort.

A couple of miles northeast of Pendleton is the village of Huntsville.  This village was laid out May 24, 1830, by early settlers Eleazer Hunt, for whom it was named, and Enos Adamson.  The first store in town was opened by Benjamin Snodgrass, and it was located on Main Street.  Benjamin died in 1856, "highly respected throughout the county"; he is buried at the Huntsville Cemetery.  William Maul was the first blacksmith, Joseph Eastman started the first cooper shop in 1838, David Hazleton was the first postmaster, and John Hunt was among the first physicians.

Although not intended to rival Pendleton, the village of Huntsville did in those early pioneer days.  For the first nine years of it existence, Huntsville was the voting station for the township.  In 1839, following a petition by the settlers of Pendleton, the township headquarters were relocated.  Today, with business and housing developments, the two towns are growing toward each other and will eventually appear as one contiguous community.

At least seven Revolutionary War veterans helped settle Fall Creek Township.  Four of these--Nathaniel Richmond, Elijah Bosoton, William Wall, and Philip Hobaugh-- rest at Grovelawn/Old Falls Cemetery.  Another one, John Mingle, is at Mendon, and a sixth, Samuel Pavey, is at the Crosley.  The seventh, Andrew Jackson, was buried on his farm.  The exact location of the family graveyard has not been discovered, but the general area is south of CR 1000S on a hill bordering Lick Creek.  His wife Elizabeth is buried with him.  They once had grave markers that have since disappeared.  Andrew Jackson was born in 1742 in North Carolina.  His military service is recorded for that state in the DAR Index of Revolutionary Patriots.  After the war, he eventually located in Wayne County, Indiana.  He moved from there and in 1827 purchased the northeast quarter of section 3 in Fall Creek Township.  His recorded children were Steven, Henry, Lucinda, Dempsey, William, Mary, Andrew, Levi, Elizabeth, Phebe, and Whitlock.  Andrew Jackson was honored, probably posthumously, when his biography appeared in the June 23, 1849, edition of the Pendleton News.

Ten pioneer cemeteries are listed for Fall Creek Township, and because of their age, most have multiple names: Bunker/Davis, Busby, Cox/Jackson, Crosley, Fall Creek Friends/Spring Valley, Falls/Old Falls/Pendleton/East Grovelawn, Hardy-Culp/Somerville, Huntsville/Williams, Mendon/Mingle, and Seybert.  Most cemeteries in the Pendleton/Huntsville area are still in use and can be located on this township plat map from 1876. 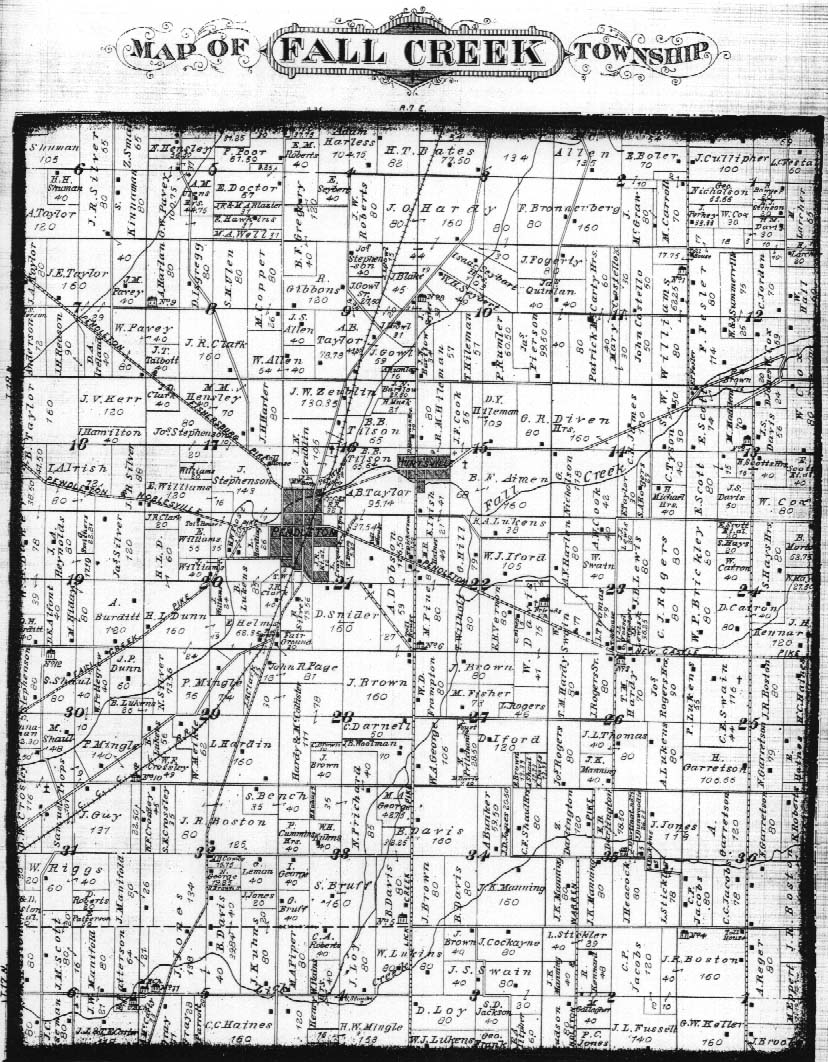