From the Kingman 1880 History of Madison County, Indiana: "In the summer of 1834, a number of members of this society [Friends/Quakers] convened at the house of Jonathan and Ann Thomas where they continued to meet from time to time...."  In 1836, they erected a log church; Jehu Middleton [on the burial list attached] was the preacher."  In 1857, the congregation erected a frame meeting house at the cost of $800.   It is still maintained and is now on the National Register of Historic Places.  The original cemetery accompanying this structure and serving the needs of the congregation is to the north of the building; a larger new section has been added to the west.

From the death dates on the accompanying list, the original land must have been used as a private burial ground before purchase by the Society.  The Fussell family has four members buried here in 1833.  Milcah Martha Fussell when forty-one years old died on August 16, 1833.  On this same date, Marion Fussell is listed as being born and passing away.  This was most likely a mother dying in childbirth along with her baby.  Five days later thirteen-year-old Sarah Jacobs Fussell died, and three days after Sarah, eleven-year-old Bartholomew Bond Fussell was buried.  Often, frontier life took its toll on the young and unsuspecting.  However, the Fussell family persevered through multiple generations and maintained their connection to this religious organization.  There are thirty-five of that surname interred at the Friends Cemetery. 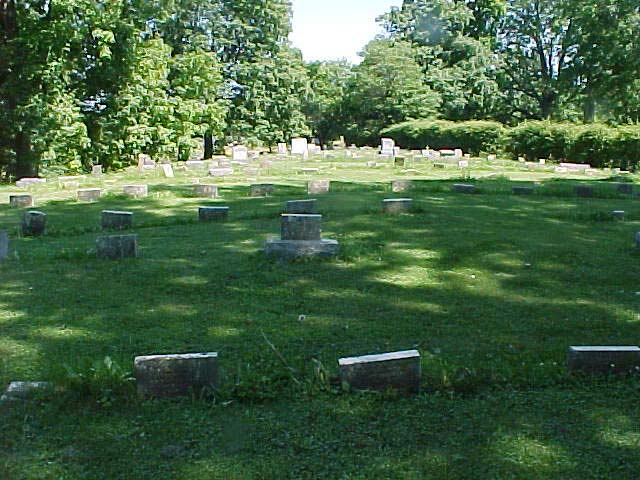 This view of the Fall Creek Friends' Cemetery shows the oldest stones in the foreground. They are not damaged.  By custom, all of the early 19th century grave markers in this "Quaker" graveyard are of this truncated design.  Some later 19th century gravestones can be seen in the distant background.

Among the early settlers resting here who are mentioned by historian Samuel Harden is John J. Lewis who was born in Philadelphia, Pennsylvania, about 1806.  He arrived near the Friends' settlement east of Huntsville in the 1830s.  Harden considered him a "useful man, polished in his manners and a well-informed gentleman."  John died in 1880.

Also from Pennsylvania was Lewis W. Thomas, "useful from first to last, serving in many places of trust and profit."  He was born in 1800 and also arrived in the 1830s.  His death January 16, 1864, "was greatly regretted by all."

In the pre-Civil War era, Friends/Quakers were universally known as abolitionists and pacifists.  In 1843, famous African-American speaker Frederick Douglass was touring through the western sections of the country, which at that time included Indiana, giving anti-slavery lectures.  He, for safety reasons, was stopping at places with a large contingent of Friends/Quakers and so during that year came to Pendleton.  A platform was erected in a grove of trees on the north bank just below the falls for his and others' presentations.  Shortly after beginning to speak, Douglass was threatened by a group of racists and in the fracas that ensued was injured.

Tim McClintick's article in the April 29, 2009, issue of The Herald Bulletin provides the details:

"...a group of men from surrounding communities attacked the speakers with clubs and eggs.  The sympathizers of the lecturers could not prevent the attack and fled the scene and were followed by the attackers.

"Douglass made it to the south side of Fall Creek where the physical abuse continued.  Several local residents arrived at the site and over-ran the mob and began to administer aid to the wounded.  The speakers were too badly hurt to continue with the lecture and were taken to the home of Neil and Elizabeth Hardy by William W. Lukens where the wounds were dressed.

"Mary Ann Swain...dressed the wounds of Douglass.  The women of Spring Valley nursed the injured while the men fearlessly guarded their safety.

"The three men [lecturers] were able to speak at the Friends Meeting House on the Sunday afternoon following the Friday attack.  The friendly crowd was reported to be too large for the building and was moved outdoors.  All lecturers spoke with bandages on their injuries; and Douglass would never regain the full use of his damaged arm..."

That episode was not the only time that the famous African-American came to Pendleton according to McClintick.  In 1876, the Republican State Central Committee asked him to give a series of twelve lectures throughout the area.  One of these was at Pendleton the evening of that year's election.  At this event Douglass was unmolested and spoke to a large crowd on a beautiful evening.  Among the friends he visited with then were John Thomas Sr. and Mary Ann Swain.  Mr. Thomas had been six years old at the time of Douglass's first visit and was actually hit with eggs, himself, during the assault.  Years later, Mr. Thomas had occasion to relate a request.  McClintick continues:

"...[Thomas] told Douglass that the captain of the mob who had attacked him on his first visit was anxious to meet him at Pendleton but was prevented by sickness.  He wanted to ask forgiveness.  Douglass replied, 'Why I forgave him long ago.' "

Neil Hardy and his wife Elizabeth, who during the visit of 1843 had cared for Frederick Douglass until he recovered from the wounds, were members of the Society of Friends.  Afterward, Mr. Hardy received a letter from Douglass thanking him for his kindness.  Neal Hardy was born in Philadelphia in 1803.  In 1832, he came to Indiana, walking all the way on foot.  He eventually settled on a farm two and a half miles east of Pendleton, on which he lived the rest of his life.  Besides a farmer and father of four children, Mr. Hardy was a merchant in the area, a township trustee, and the first president of the New Castle Turnpike enterprise.  He was described by historian Harden as of medium height, of square-ish, heavy build, with good features, a high forehead, and dark eyes.  He died November 16, 1869, and was buried here at the Friends Cemetery.  From both Harden's and Forkner's accounts of the events surrounding Frederick Douglass's 1843 visit to the county, Neal Hardy was, evidently, a man whose life was a witness to his faith.