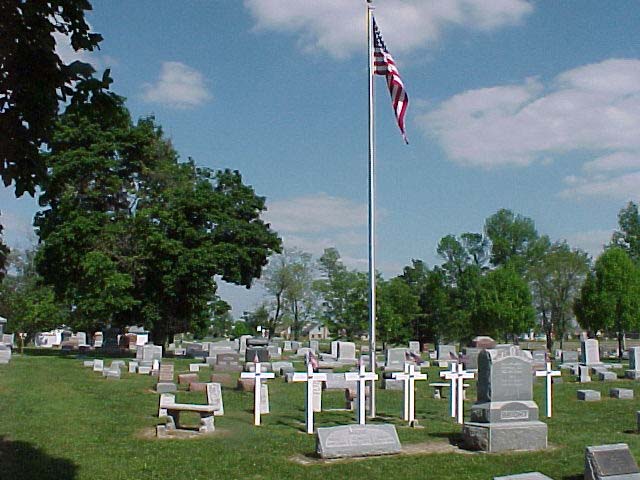 The modern cemetery association that is now called Brookside started out as the burial ground for the first settlement in Stony Creek Township in the 1830s, Fishersburg.  The Fishersburg Cemetery was a distance to the southeast from Fishersburg.  With the coming of the railroad in the 1870s, Lapel was developed as a station and became the bigger of the two adjacent community centers. Lapel was, as it turned out, actually closer to the Fishersburg Cemetery than Fishersburg was and therefore utilized and expanded the cemetery's services.

The old Fishersburg Cemetery--modern Brookside--has also been called Lapel Town Cemetery and Old Lapel Cemetery.  It contains the graves of the two men who designed Lapel: David Conrad, 1828-1919, and Samuel E. Busby, 1828-1913, along with numerous members of their families.  The Fisher family, for whom Fishersburg derives its name, is also well represented with over fifty of that surname on the attached burial record.  The oldest grave with a legible stone is that of William Aldred/Alred, one of the pioneer settlers to Stony Creek Township in 1836.  William was born in 1795 and died in 1870. (For more history on Fishersburg and Lapel, go to the Stony Creek Township page.)

While the modern cemetery continues to expand, scattered among the graves from the 20th and 21st centuries are those for the settlers from the 19th.

In the first row at left is the column for Thomas L. Fisher, 1842-1873.  Middle is the base giving the data for Elizabeth J. Cook, wife of Dr. Daniel Cook; she died in 1873 when forty-two years of age.  At right is the short obelisk for John Gwinn who also died in 1873.

In the second row at left is a stone unique to the cemeteries in Madison County.  In the 1800s, doves were often used on the grave markers for children, but this dove is sculpted as dead whereas the others are depicted as alive, flying or standing.  The body of the dove is lying up against the trunk of a small tree; the tree symbolizes the family and its branches.  The stone in the middle is a government marker for a veteran of the Civil War.  At right is the rounded stone for William Riggs, who died in 1874. 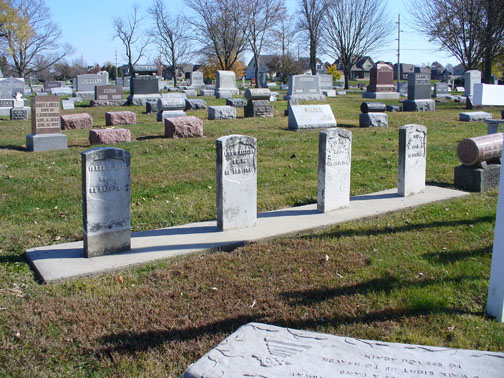