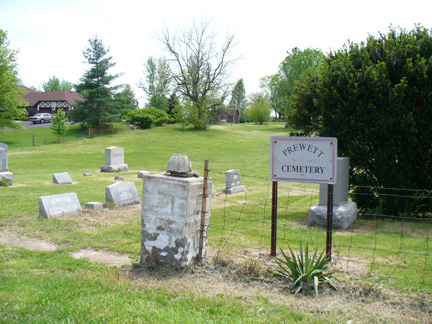 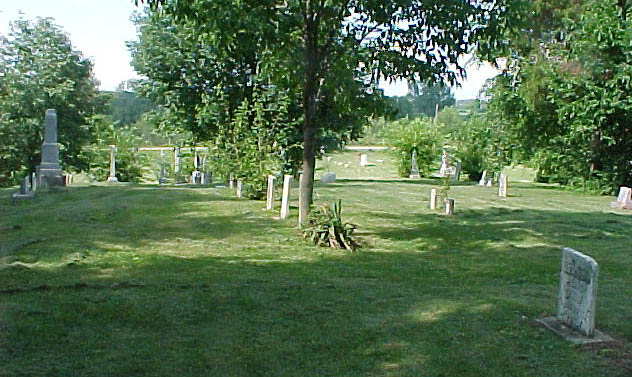 Begun in the 1830s, the Prewett Cemetery is still serving the residents of Pipe Creek Township.  While the older stones are on a shaded hill, the newer markers are aligned down the hill and through the small meadow that runs along CR 700N as seen in the above photo.

The Prewett/Prewitt Cemetery was begun for the farming families who first entered this western section of Madison County in the mid 1830s. At left, below, is the stone for "John Miller died Aug. 23, 1849 aged 47 yrs. & 8 ds."  John has the distinction of being one of the earliest to homestead in Pipe Creek Township.  John and his family were the third--behind John Shell, the first, and Jacob Sigler, the second--to clear the land, build a log shelter, raise crops, and husband livestock.

Indeed, the earliest legible gravestone is that of Elizabeth Flint who at fifty-one years of age died in 1835.  Of course, as in any pioneer cemeteries, there are graves without markers. Logically, any number of those could be interments before that year.  The next oldest stone, however, is that for five year old Deborah Mills who followed in 1836.  Many of the earliest stones, in fact, are those for children. In the first half of the 19th century, the death rate for those not yet in their adolescence could run as high as one in three.  The records of the Prewett bare witness to that high percentage among the young.  The Mills family lost three more children before 1853, and the Montgomery family lost a total of six before 1854. The family of William Montgomery, c. 1781-1844, is listed as one of the first to settle in the township before 1840.  William is buried here along with his wife who died in 1849.

The cemetery was named for the Prewetts who were first land owners and who began the burial ground.  The earliest graves having legible stones with the Prewett surname are those for William Prewett, c. 1795-1863, and Sarah, 1796-1861. Other first families to this township, represented at this graveyard, who have not already been mentioned are the Benefiels, Jerrells, Littles, Moores, Shaws, and Webbs.

According to Samuel Harden's The Pioneer, an early settler to the area was William Benefiel/Benefield, who was born August 14, 1806, near Mt. Sterling, Kentucky.  He married Cynthia A. Kidwell 1826 in Wayne County, Indiana.  She was the daughter of Rev. Jonathan Kidwell, a Universalist minister, the founder of the Cincinnati Star, and a debater who had held discussions with Benjamin Franklin. William brought his family in 1834 to Madison County and settled along Pipe Creek.  His property was three miles north of Perkinsville and "one of the finest farms in the county."  Historian Harden continues, "He [William] was a large, powerful man, and reared a large family of strong, healthy children": James M., Robert S., Jonathan, Rebeeca A., Levi, Leander J., Isham, and William H.  Wife Cynthia died in 1854 when forty-seven years old, and William died in 1870 at sixty-four years. Both are buried here at the Prewett Cemetery.

Among the other early settlers resting here are the Jerrells: Joseph, 1804-1870, whose stone is below left; Francis, who was  twenty-two when he died in 1877, middle; and Rebecca, below right, who at fifty-two, also died in 1877.

These three markers in the Jerrell/Jarrell section also look to be from the same stone cutter.  They, furthermore, have the same Victorian symbol--hands clasping or shaking.  This represented the partnership of husband and wife in life and their recognition and friendship in the after-life.

While the Webb family--Jacob, Jasper, Minor, and Theodore--are recorded as first land owners in various townships, the family burial site was evidently at the Prewett here in Pipe Creek Township. There are at least twenty-four members of the 19th century Webb family installed here.  At right Theodore was fifty-nine when he died in 1860.  His wife Rebecca is in the middle. Another patriarch of the family was Jacob, husband of Mary, left.  Webb descendants still reside in Madison County.

Sarah, wife of Isaac Moore was born during the Revolutionary War.  She was eighty years old when she died in 1856, making her birth year around 1776.  Husband Isaac was born in 1764-- before the Revolution.  He died at eighty-nine years of age in 1853.  Isaac and Sarah were the parents of Thomas Moore who has a biography in the 1895 The Pioneer by Samuel Harden: "Mr. [Thomas] and Mrs. Moore first settled in Pipe Creek township, Madison county, about the year 1839, on the county line three miles west of Frankton and four miles south of Elwood.  Here in the new county a life of toil and hard work began...  Mr. M. was born in Virginia in 1799, son of Isaac Moore..."  Evidently, parents Isaac and Sarah moved with and lived near their son Thomas and his family.  In fact, it seems they were relatives for a substantial contingent of Moore families who settled in this locale.  Here at the Prewett are also John Moore, who was eighty-two when he died in 1880, and Daniel, who was seventy-four when he died in 1875.  Females recorded here for this family were Rebecca, sixty-eight years old when she died in 1874, and Deborah, who passed away in 1889 at seventy-nine.

Sarah's well preserved stone is left, and husband Isaac's is middle.  In the same section, relative William Moore died in 1872 when sixty-four years of age.

Representing the families of other settlers are the stones for Vernila Hays, left, who died in 1879 at eighteen years, Florence Eliza Victoria Hays, middle, who was only two years old when she died in 1870, and the replacement marker, rifght, for the Likens family. 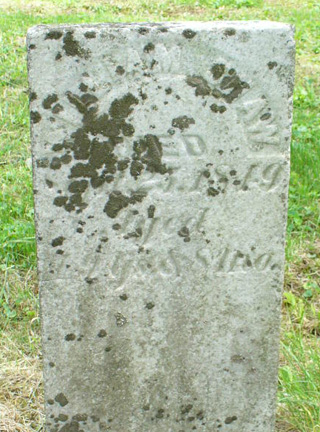 Since the Prewett Cemetery is near the southern border of Pipe Creek Township, it holds several early settlers--like the Webbs above--to neighboring townships.  County historian Samuel Harden lists William Shaw, whose stone is pictured right, as a first land owner in Lafayette Township on the eastern half of Pipe Creek's southern border; William died in 1849 at forty-nine years.

In the south east corner is a small section for the Gustins.  Omitted from the burial list by some oversight, Kesia's stone, left, records that she died June of 1867.  Mary's column, middle, and William's tablet, right, are duly noted.  The Gustins were originally from southwest Ohio, specifically Warren County, and while these three lived in Pipe Creek Township, other Gustins homesteaded Union and Adams townships as well as parts of Henry County on Madison's southern border.  (See Otterbein, Walker, Keesling, and West Maplewood for more Gustins.) 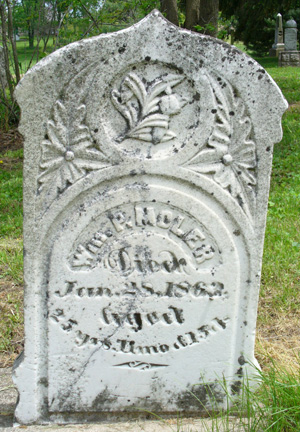 The Prewett Cemetery is basically well maintained and has many older stones whose design and craftsmanship are well done, very attractive, and unique to Madison County pioneer cemeteries.  As an example is William McCler's Victorian marker, above, with heavy detailed carving, pointed arch, rounded lines, and multiple fonts. 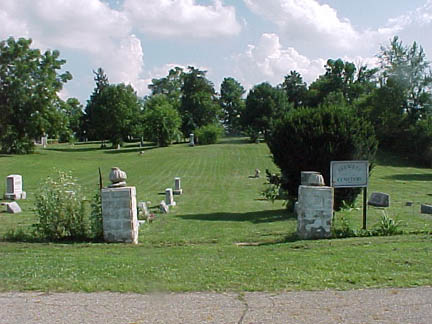 As the picture above indicates, viewing the Prewett Cemetry from CR 700N, the old section at the top of the hill may well be missed.  However, there are more pioneer and early settlers' graves in the shade of the trees than newer burials near the pavement.