Location: north side of CR 360N, between SR 9 and Alexandria Pike

The Pennsiton/Croan Cemetery is another sad example of disrespect and desecration.  The farmer who owned the property in mid 20th century--before legislation protecting pioneer cemeteries--destroyed this burial ground by taking up the stones, casting them away or using them for steps or building material.  He then plowed over the graves of approximately thirty people. 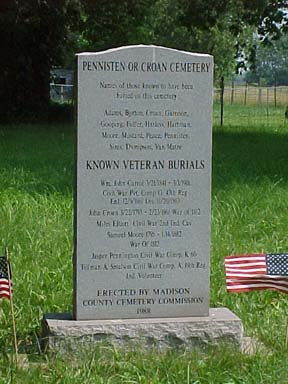 Georgia Lyons, Madison County historian, genealogist, and former MCCC member, took a special interest in this cemetery's plight and was instrumental in reclaiming this sacred ground.  During her tenure, the cemetery area was turned over to the care of the Richland Township trustee, the boundary fenced and gated, and the large inscribed tablet, pictured left, installed.  The stone faces CR 360N and at the top reads in part:

The lower half is dedicated to the known veterans buried at this location. The names are taken from the American Legion's Cemetery Record of Deceased Veterans, which also provided the partial list below.  Six of the individuals named are veterans of the Civil War.  There are three veterans of the War of 1812, and each of these are also early settlers to Madison County:

Mr. Penniston rests in an unrecorded grave site, according to the American Legion.  He was a patriarch of the large Penniston family that helped settle the Lafayette-Richland township area.  Relative Jasper Penniston, listed below, served in the Civil War in Company K 60th Regiment.

John Croan is buried in grave 5, row 1, lot 5.  John was born March 22, 1793, and died February 23, 1861.  Initially, John Croan settled in 1828 in Anderson Township but moved his family in the spring of 1832 to the southeast corner of Lafayette Township, section 35, which is near this Richland Township cemetery.  The first white child born in Lafayette Township was John and wife Sarah's daughter Annis in 1834.

The stone tablet, documenting what records could be found on the people buried now in unmarked graves, was erected by the Madison County Cemetery Commission in 1988.  Commission members make a special effort to decorate this cemetery on Memorial Day to honor these veterans and the wishes of former MCCC volunteer member Georgia Lyons.