The name of "Nelson Cemetery" is rather deceptive.  Within this larger general area are actually four burial grounds.  The first was the private graveyard for the Nelson family, early farming settlers.  Theirs was actually the first cemetery in the township. The family's graveyard is located back from the road, behind the fence, and on the hills closer 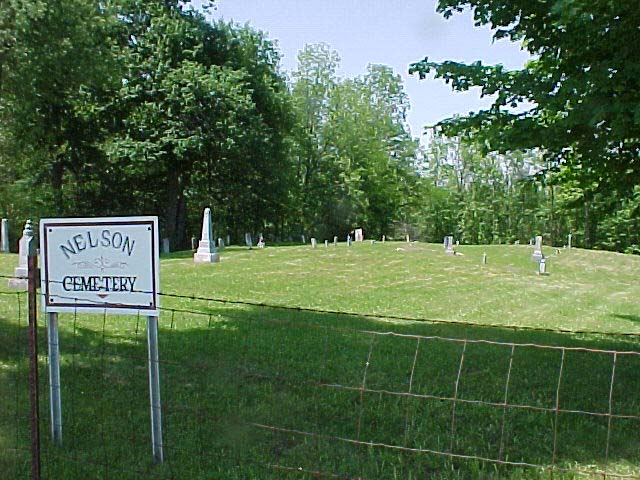 to Killbuck Creek.  The earliest recordable stone at this location was that for Tobitha Nelson, daughter of Samuel and Rhoda.  Fifteen year old Tobitha died July 2, 1833, a very early grave for the area since Richland Township had accepted settlers only starting in 1830.  Tobitha may be the reason why the Nelson family had to choose a location to begin a graveyard.  By tradition 19th century private burial grounds were usually on the family property, away from the living, and, if possible, on a hill.  Hills figuratively were closer to heaven and pragmatically more difficult to plow.  The hills that encompass the original Nelson family graveyard are tall and steep for the region.

Other members of the large Nelson family soon accompanied Tobitha, and among those with stones that could be transcribed was Benjamin, who was born in 1781 and who died in 1846.  According to family genealogist J.G. Nelson of Pennsylvania, Benjamin Nelson started life in Greenbriar County, Virginia (now West Virginia).  His father was John Nelson and his mother was Sarah Stearns; both were born around 1760.  The Nelson family originally hailed from England from which Nelson emigrants settled first in Virginia.  In Pendleton County, Virginia, (now WV), Benjamin married Delphia/Delphena Miller, whose father was Henry and whose mother was Barbara Arbaugh.  Benjamin and Delphena eventually had thirteen children.  The first two were born in what is now West Virginia.  Sometime before 1813 Benjamin moved with his family, parents, and brother Solomon's family across the Ohio River to Lawrence County, Ohio.  While living there the Nelson patriarch John died.  Fortunately, Benjamin and Delphena would eventually have an additional nine offspring.  The names of all their children were Sidney, Henry, Mahala, Benham, Isiah, William, John, Matilda, Isaac, Amos, Eliza, Nancy, and Benjamin Jr.  In 1841, Benjamin decided to sell his property in Ohio and follow his brother Solomon and other Nelsons here to the Killbuck Creek area of Richland Township.  At this new Hoosier homestead, fields were cleared for plowing, and a home and fences erected from the surrounding timber.  Benjamin died only five years after arriving, but some of his Nelson roots were firmly planted in Madison County.  Benjamin's brother Solomon, who settled here first, also died in 1846 at "57y 8m 11d."  Benjamin's wife Delphena followed in 1876.  She, like her husband, had been born in the 18th century, specifically 1792.

Additional Nelson family members buried here include Elender, who died August 2, 1845, "in the 57th year of her age." That would make her birth year about 1788.  Young adults Ashford, who died in 1851 at twenty-one, and Frances, who died in 1842 at twenty-six, speak of the short lives for many early settlers.  Of course there were children who died young.  Tobitha had a sister Emiline, who lived to be only "10y 5m 17d"; Emiline died in 1842.  One year old Leander, son of John and Elizabeth, died on August 5, 1849, and six year old John S., son of Isaac and Mary, died September 12, 1860.  Isaac had lost his wife Mary in 1855.  Additionally there are seven more children under the age of thirteen who are buried at this location.  The death rate among the young back then was often as high as one out of three.  Furthermore, once a family's private graveyard was begun, it was very customary to offer its services to the neighboring farming settlers who had also lost loved ones. It is hard to imagine what those early settlers went through in the untouched Hoosier forests of the 19th century.

Veterans from the first half of the 1800s often took advantage of the government's offer of land patents in a newly opened frontier instead of monetary payment for their services.  Such was the case for four pre-Civil War soldiers interred at the Nelson Cemetery according to the Atlas of Cemeteries and Record of Deceased Veterans of Madison County, Indiana.  Former soldiers with their families would homestead wilderness acreage, survive the hardships, live from their produce, and be buried in the earth they nurtured.  Three veterans from the War of 1812-- America's second fight for independence as some historians have called that conflict--rest at the Nelson: William Bell, Frederick Groves, and Joseph Wigner.  Also, an E. Kiger is recorded as a veteran of the Mexican-American War in the 1840s.  Additionally, there are seven veterans from the Civil War buried at this location.

At right is the well preserved stone for "Leah wife of John Nelson died Feb. 15, 1855 aged 31y 5m 2d."  At left is the marker for "Samuel Nelson died Aug. 17, 1843 aged 61y 2m 27d."  The rolling hills along Killbuck Creek to the left can be seen in the background of each photo as well as the other markers for family and neighbors.

A second cemetery just to the south of the Nelson's and along the road was instituted for the Ashby Methodist Episcopal Church which was organized in 1832 by Joseph Barns and Elias Hollingsworth.  In 1833 Joseph Barns and wife Lydia deeded to church trustees "for the love that they have for the church and Christian religion" one and a half acres of land "on what is now known as the John Nelson farm" for the site of "a meeting house, a school house, and a burial ground for the M.E. Church."  Shortly afterwards, the trustees erected a small log building.  There they continued services for over thirty years and occasionally attended to the burial of a departed congregant in the accompanying cemetery located at the back and along the sides of the building.  However, in 1870 a larger meeting house, 34' X 46', was constructed eighty rods west of the original and closer to Killbuck Creek.  The 1880 map of the township shows this new church at the southeast corner of the intersection of CR 200E and 300N in section 28, and the church's cemetery is still indicated by a cross to the east on the north side CR 300N.

At some time in the early 20th century, a county poor farm was located in the vicinity, and thus a fourth graveyard was within this area.  Mrs. Wesly Scott provides some details in a letter responding to Gene Bock's 1970 column "Man About Town" in the May 23rd Anderson Bulletin: "There is a true 'Potter's Field' immediately west of the Richland Cemetery, where many were buried without markers when the county [poor] farm was on the Nelson property."

The attached burial list, transcribed in mid 20th century, contains the inscriptions of all legible gravestones within this large general location.