John Hancock, buried here in 1886 at eighty-two years of age, not only has a surname linked with American history but also has ancestors who survived 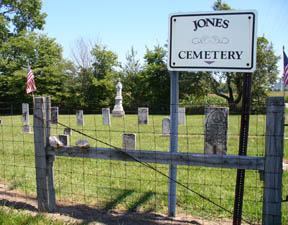 hostilities in the colonial frontier.  His family's story gives modern readers a glimpse of what it was like to live on the fringes of civilization in the early 18th century in the American colonies.  According to Cynthia Hancock Reeder, John's sister, in an 1891 letter reproduced in Samuel Harden's The Pioneer, their father was a Joseph Hancock, born 1758; he was a seven year veteran of the Revolutionary War.  Joseph's mother was Mary Bush who lived to be 106 and whose first two husbands, including Joseph's father, were killed by Indians.  Several of Joseph's half-siblings were taken as prisoners by belligerent tribes, and one member, according to the family history, was burned at the stake.

After the Revolution, Joseph married Catherine Baltimore whose mother, "Grandma Baltimore" had had a dangerous, harrowing experience, herself, with a Native American tribe.  Grandma Baltimore's first husband was named Stotts; they had six children.  Mrs. Reeder relates what happened to her ancestress and the family:

"The Indians came upon them and killed her husband and took her and her six children prisoners, and drove them off to their [Indians'] towns, where her children were scattered, and she never knew what became of them.  She was finally sold to the French, when she and nine others ran away.  They had to hide during the day and travel at night.  There were but two ever got through to the fort, grandma and a comrade.  After this she married Baltimore.  The fruits of this union were a son and daughter, Catherine Baltimore, my mother..."

While such frightening events did not occur in the wilderness of the New Purchase, these stories indicate how much different the pioneer life style was from today's. Pioneers, whether settling in colonial America or creating a community in Madison County, had to be constantly concerned with the basics of survival: the next meal and the meals for the next seasons, safe passage, water, weather, injury, sickness, aloneness, care of livestock, and attack from wild animals or wild men.  Luckily, for later members of the Hancock family, the pioneers and settlers in Madison County, Indiana, did not have to worry about hostile Native Americans--for the most part.  The Delaware who had sold their lands in the St. Mary's Treaty of 1818 and the Miami who had moved to reserves in the north were basically peaceful. 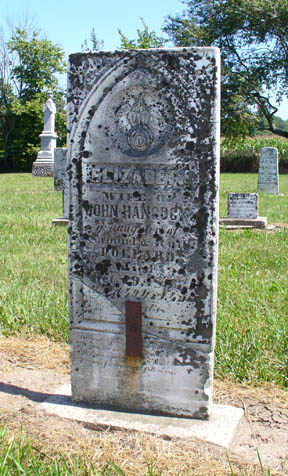 The Jones-Heagy Cemetery's Hancock family were among the early settlers to the county's east-central Richland Township.  John, son of Joseph discussed above, was born in Ohio March 8, 1804.  His wife Elizabeth Pollard was born in Kentucky in 1807.  They were married in 1826 in Wayne County, Indiana, and their son Joseph was born there January 5, 1831.  Other children of the John Hancock family were Nancy, Ruth, Pollard, George, Fanny, and Rebecca.  The Hancocks migrated later in the 1830s and were among those farmers taking advantage of the township's "rich land."  Son Joseph eventually married Esther Fountain whose people had moved to the county from Maryland also in the 1830s.  Joseph and Esther's children were Sarah, John, Mary, William, Joseph, James, and Martha.  There are eleven of the Hancock name buried at the Jones Cemetery as well as collateral branches of the family.

Many of the stones from the 1850s are in very good shape and show the iron staples used in mid 20th century to repair broken markers.  Additionally, the rectangular slabs are very large and thicker than in most other cemeteries of this period.  The Hancock stone on the left and the Eppard on the right are two examples.  Chalking would bring out the incising on both, even the lengthy verse at the bottom of the Eppard.  The difficulty with a few of the stones is that they face into the perimeter fence. 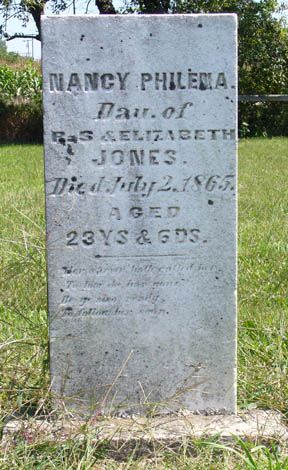 The cemetery was named for the first land owner who donated this portion to serve the surrounding farming families.  Isaac Jones, the first justice of the peace for Richland Township, was from John Hancock's generation.  Isaac was born around 1790 and died at fifty-seven years in 1847.  Also from the Jones family are Elizabeth who died at forty-two years of age in 1854 and Robert who was sixty years old when he died in 1866.  Robert's daughter Nancy died the previous year as her stone, right, documents.  Others from this time period are Christopher Tanner who was born around 1793 and died in 1858 and Samuel Eppard with a death date of 1887 at seventy-two years of age.  Both of these men lost wives named Mary soon after settling.

Life on a frontier as unthreatening as the New Purchase still exacted a toll on the wives and mothers of pioneering families.  Pregnancy and child birth were very dangerous in this era before medical knowledge.  Above are two of the earliest stones both for wives named Mary: on the left the wife of Christopher Tanner and in the middle the wife of Samuel Eppard.  Mary Tanner died in August of 1848 at forty-two years of age; Mary Eppard died the next month at age thirty-one.  On the right Amanda, wife of Chancy Vermillion, died in 1861 at only twenty-two years old.

What other stories did the Hancock, Jones, Eppard, and Tanner families have of their ancestors' trials and triumphs?