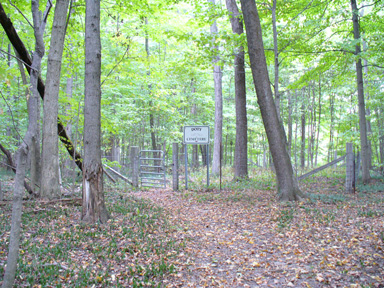 The Doty Cemetery is a family burial ground in the extreme southwest corner of the county.  It is two miles west of the village of Ingalls in Madison County but only a quarter mile from Fortville in northern Hancock County. While the Pickard Cemetery is challenging to get to and the Weddington is a hike, the Doty Cemetery is the winner for being the most difficult.  Walking back to the Doty, one sees Madison County as the pioneers first saw it--untouched forested wilderness.  Furthermore, the Doty was placed on one of the long steep hills bordering a tributary of Lick Creek.  Getting to this family burial ground might prove too challenging for older genealogists and historians.

At far left, the nature trail heads further west out of the campground and down a few undulating hills.  At mid left, there is a steep hill down to the small ravine through which runs a tributary  of Lick Creek.  At mid right is the tributary's creek bed, dry in this picture, which has to be crossed in order to reach the opposite hill.  At far right is the even longer, steeper hill to the Doty Cemetery.  Tom Hull, the small blue dot in upper center, volunteered to pose for perspective.  He commented upon seeing these pictures that they do not do the trail justice.  The rocks and roots throughout the path make the hike more difficult, and the steepness of these last two hills is challenging.  The good thing is that the trail ends at the top of this last hill at the gate to the Doty Cemetery (see first picture).

From just inside the gate, one sees field stones, Civil War veterans' memorials, and the base recording Doty family members.

Being a small private cemetery, the Doty is not listed in the 1880 History of Madison County, Indiana, but it is mentioned in the 1914 history by Forkner.  Arriving in the early 1820s from Pennsylvania, John and Charles Doty were among the first settlers to bring their families to Green Township.  Perhaps the reason for starting this family graveyard was the death of twelve year old Mary Ann Doty who passed away in 1832.  She is recorded on the west side of the base for the broken column.

Just four years later, her father John Doty, Sr., died November 28, 1836.  Brother John Doty, Jr., who died in 1869, is recorded on the base's north side.  Jane, mother of Mary Ann and John, Jr., and wife of John, Sr., died at age seventy-seven in 1872, and this is probably when the family memorial was erected, judging from its architectural style.  Jane and John Doty, Sr., are recorded together on the south side.

Once a family graveyard was started, it was traditional for its services to be offered to the neighboring community of farming settlers.  Such is the case here.  In addition to the Civil War veteran's government stone  for John Doty, Jr., below left, is the broken traditional stone, below right, for Sgt. Peter C. Staats who died during the war.

While a pioneer cemetery this remote is rather fortunate to still exist, there are a few sad points to note.  Before a stone cutter was in the area or when a family could not afford to have a professional stone made for a grave, it was customary for field stones to be upended and used instead.**  There are nine of these blank, rough, irregularly shaped grave markers in this cemetery.  Of course, there is now no way of knowing or researching who these early settlers were.  Additionally, there are six grave-size depressions in and around this burial ground, indicating completely unmarked and forgotten burial sites of anonymous 19th century Madison County Hoosiers.

** The six field stones, pictured above, may mark the graves of early 19th century Christian Native Americans--"Indians."  Historian Ray Davis in an article in the October 1980 Madison County Historical Gazette relates that members of the DAC and DAR in the 1930s had visited this burial ground, recorded the tombstone inscriptions, and included mention of markers in the shape of arrowheads for "six Christian Indians."  Davis, himself, with the help of locals, trekked to this family cemetery and stated in the article that the Indians' headstones "had become imbedded in the ground through the years and only the tips protruded." These, by description, fit Davis's story.  There are three other fields stones like these on the other side of the burial ground.  Whether DAC and DAR members had some proof of the Native American story, that has since been lost, or those members assumed that the fieldstones were for Native Americans since the stones were primitive and so different from traditional 19th century markers, the MCCC will probably never know.  The possibility of the Native American connection is recorded here.  The other possibility, as explained above, is that the fieldstones were used by survivors who could not afford a carved marker and that the stones represent early Madison County settlers who will remain unknown.

These two stones are also a mystery since neither are on the list below.  The one on the left may be for a member of the Staats family, who died June 8, 1848.  The one of the right, however, is completely indiscernible.

To end on a positive point, the Green Township Trustee Greg Valentine must be given credit for making his way to this remotest of burial grounds in order to keep the grass, weeds, small trees, and any additional undergrowth under control.  On this particular unannounced visit (2007), the interior of the cemetery was neat and the stones unencumbered and legible.  Hats off to Greg!  It should also be pointed out that the original access to the cemetery was probably not via the tortuous route that must be trekked now.  More than likely, the Doty was originally approached along the top of the cemetery's hill which winds back to the southeast.