Location: east side of Alexandria Pike, south of CR 500N

e influx of settlers in the 1830s into the rich land north of Andersontown/Anderson, little villages developed along the well-traveled trail between Anderson and Alexandria. By 1876, the first official township plat maps for the county were being drawn, and on the map specific to northeast of Anderson, the area is now named Richland Township, the trail is label Anderson-Alexandria Pike, and the hamlet of Pro 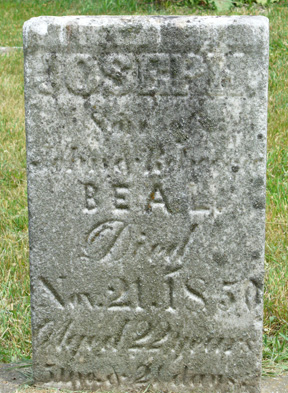 sperity is shown in the northeast corner of the pike's junction with CR 500N. The shaded rectangles on the map indicate the store, post office, houses, and probable bar.  The families of Beal, Hartman, Garrison, and Rutherford own the surrounding farm land.  A little cross, representing a cemetery, is drawn southeast of Prosperity on the east side of the pike on the J. Hartman property.  Twenty-five years later, the time of the 1901 atlas for the county, Prosperity is still there, but it has not grown in size, and the cemetery is still indicated.  Only the land of the Hartmans has changed ownership; the Broadbents are now shown as farming the acreage. However, just thirteen years later, the several businesses once in Prosperity seem to have disappeared.  Historian John Forkner's 1914 history of the county reports, "Three or four houses remain to tell of the good times of the bygone days, when Prosperity was a bustling little place."  Forkner does list three unnamed cemeteries for Richland Township, one of these "in the northwest quarter of section 19."  This would be the Broadbent. 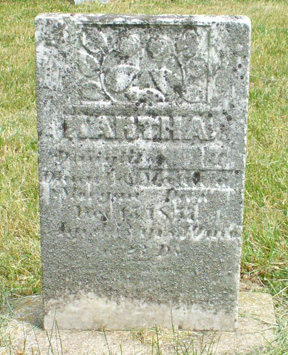 bent Cemetery evidently served not just the nearby farming families but also the those folks living in the hamlet.  The earliest grave on the list below is that of Elza Ellen Eads who died "Sep. 4, 1842 at 7y 5m 23d."  Another child who died a few years later but at a younger age was Mary Beal, third on the list below.  Samuel Garison/Garrison must have been a patriarch of the family farming the 230 acres south of the village.  He died February 1, 1846.  He was sixty-four years old, making his birth year around 1782.

Some of the oldest legible stones in all of Madison County are here at the Broadbent. L-R, Elza Ellen died in 1842, Levi died in 1844, and Martha E. died in 1848.  In fact, Martha's stone states that she was the wife of Moses Tredway when she died at "17ys 3ms 9ds."  That would make her probably his first wife since a later wife Sarah is also interred here.  The stone at far right is that for Samuel Garison/Garrison who died "Feb. 1, 1846 aged 64 years."  The incising style for this old stone is unique in the county. 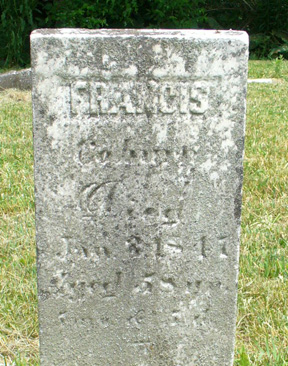 Of special note is the stone above for Francis Coburn.  Omitted by some oversight from the list below, Francis died "Jan. 3, 1847 aged 58ys. 5ms. & 5d."  This would make his birth year around 1789.  The Coburn family illustrates 19th century America's concept of "Manifest Destiny," the migration to and settlement of all land from "sea to shining sea."  The Coburn family has origins in the 18th century American colonies of the eastern seaboard.  After the Revolution, Francis's ancestors settled in the Ohio section of the Northwest Territory.  Francis, himself, traveled with family members from Warren County, Ohio, to Madison County, Indiana, in the mid 1830s.  Various relatives can be found on land records for Richland and Lafayette townships.  In mid 1800s, Francis's descendants left Indiana seeking land west of the Mississippi.  Their travels can be traced in the records of Missouri, Iowa, Oregon, Washington, and finally California on the west coast.

In the 21st century, genealogists are having to reverse this westward movement.  In the summer of 2007, Francis's great-great-great-grandson James Coburn and wife Julie, residents of Texas, made a trip back east to the Midwest in search of ancestors.  It was with great pleasure that MCCC  volunteers assisted them in finding the Broadbent Cemetery and locating Francis's grave marker here.

Also residing in the adjoining township was the Rains family. Zail Rains, son of Jacob Rains, was born 1817 in Fayette County, Indiana.  In 1837, Zail married Mary Elliott.  They came to Madison County in 1840 and developed over the years a very prosperous farm of several hundred acres in Lafayette Township.  Mary Elliot Rains during this time delivered eight children who grew to adulthood: Martha, Jacob, William, John, Hiram, Sarilda, Leonard, and Joseph.  She predeceased her husband, dying on September 17, 1869.  Zain customarily buried her in the nearest cemetery, the Broadbent.  She is the only Rains listed below.

As evidenced by the last two entries on the burial list, there was a couple by the name of Young that once lived in the area.  They lost two children, Aletha and Wiles, who only lived to be one and two years old respectively. Christopher Young, referenced on the stone above right, is recorded as a first land owner in Anderson Township on Richland's southern border.

In the fall of 2007, the MCCC undertook a cleanup of the Hartman/Broadbent Cemetery.  While only several hundred yards from Alexandria Pike, the fifty or so grave markers were none the less extremely difficult to locate so heavy was the surrounding undergrowth and trees in the fence boundary .  Contractor Larry Brown with the help of assistant Tony Brown (no relation) and thirteen year old neighbor Austin Minton cleared fence rows, cut down trees, replaced the gate and sections of fence, straightened existing markers, and cleaned the area of debris.  During their work, they discovered a number of additional whole stones which they reset and over fifteen partial stones which they pieced together.  Their efforts have highlighted to area residents an important part of Richland Township history.

The Hartman Cemetery can now be seen from several hundred feet away.  The pile of brush in the picture at left is only part of the enormous amount of undergrowth taken out the fence line.  The large stripe of cleared earth in the picture at right shows how much was obscuring the cemetery.

A number of the rediscovered stones must have been buried at the time of the transcription since their information is not included on the burial list.   While Arey Ann Jane, at far left, is the first on the burial list, Mary and Joel Harris, middle left, are not.  Martha Morgan, middle right is also missing as is Jane (?) wife of Jesee Vermillion, far right.

At right, Maria, "wife of Joseph Rockhold died June 3, 1858 aged 41yrs 6ms 4ds," says the list below.  However, on closer inspection the date looks more like 1838, making this stone the oldest at this cemetery.  A traditional inscription is at the bottom but is illegible now.

Several of the rediscovered stones will take chalking or paper rubbings in order to bring out their data.  At far left, may be an Abigail, middle left seems to be a Clarisa L. Lewis, and at middle right a Martha.  A Retherford marker at far right shows its repaired column above the legible base.

The Retherford family, who owned farm land east of Prosperity, is represented here by Aleatha, Samuel, and Sarah--all of whom died within a two week period in January of 1874. Their family's column is at the far right above.  Also the Rice family, who farmed land to the north on CR 700N, lost Aligah who was "62y 6m 12d" when he died.  The list shows the death date as "Sep. 28, 1811."  The year is a misreading of the date on the stone.  Only the Native Americans were residing then on the land that would become Prosperity and the Broadbent/Hartman Cemetery.