Van Buren Township occupies the northeast corner of Madison County. It was named after President Van Buren and was one of the last areas in the county to be populated.  Records do not show exactly who was the first to settle here.  John and Hiram Palmer, Jacob Davis, and Thomas Gordon are supposed to have arrived sometime in 1830.  In 1836, though, other settlers and their families started moving in: John Crye, Thomas Cartright, James Blades, John and William Kelsey, Samuel Fenimore, and John Moore.

The village of Summitville began as a post office on April 28, 1847.  However, the area was not surveyed or laid out until 1867 by Aaron M. Williams who donated part of his farmland as a town site.  Also, throughout the years, the village has gone by various names.  For a short time, it was called Wrinkle because it was so small.  Later, the village was informally named Skipperville in reference to cheese.  As the story goes, two travelers stopped at the village for the night and purchased cheese and crackers to eat from a storekeeper.  The crackers were stale, and the cheese had maggots in it.  Cheese in this condition was called skipper cheese back then, so the travelers, spreading the story, referred to the town in derision as Skipperville, and the name stuck for a time.

There are three theories on why the village was officially named Summitville.  One is that Summitville is two miles south of the summit of the state.  A second one contends that railroad surveyors assigned the village as the highest  point between Fort Wayne and Indianapolis.  The third is closely related to the second in explaining that the village is the highest point in Madison County.  Just to keep the issue diverse, the name of the town platted by Aaron Williams also appears as "Summit Hill" and "Summitsville" in certain historical documents.  Aaron Williams, 1819-1887, is buried at the Vinson Cemetery.

Of the four pioneer cemeteries listed for Van Buren Township, one is destroyed, the Cowgill; one is still under the supervision of descendents of the family, the Broyles; one is still operational, the Music/Musick; and one grew into a larger modern business, the Vinson/New Vinson/Shinkle/Summitville.  This last development is often the case for pioneer cemeteries affordably located near communities. The 1876 plat map below for Van Buren Township shows the Vinson and Musick cemeteries located on the old Anderson-Fort Wayne Trace as well as A.(Aaron) M. Williams' property in the southeast part of section 20. 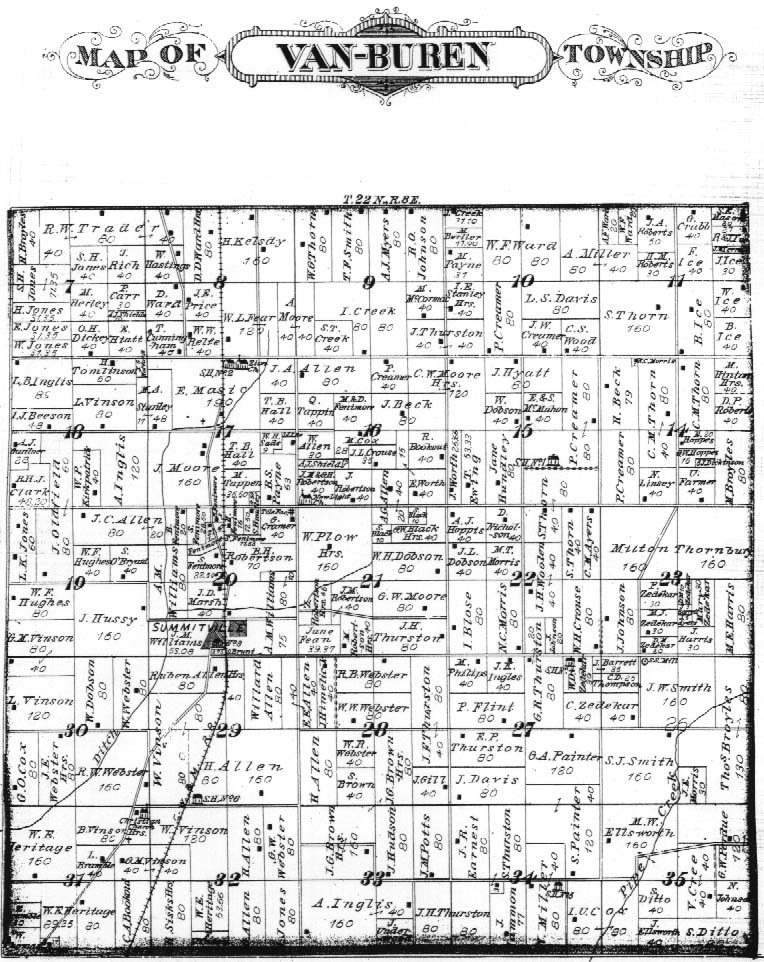