The Shell Cemetery is hidden from passersby traveling 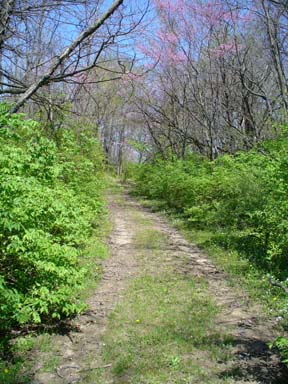 along CR 600N.  This old family graveyard is situated off th 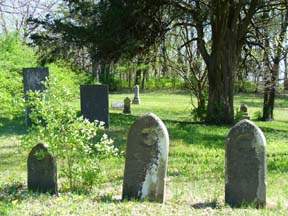 e north side of the road, down a foot path, the beginning of which is only marked by a vine-covered gate.  The path winds into a dense woods.  There in the middle of the low hanging foliage is a small meadow where a number of stones once stood.  The few grave markers that remain are dutifully cared for by the township trustee out of respect for the first families to pioneer this area.

John Shell arrived along Pipe Creek in 1830/1, the very first pioneer to the township.  He and his family had first settled near Perkinsville in Jackson Township in 1826.  With the opening of the Pipe Creek area, John chose to move north.  However, it would be more than two years before any other settlers would join the Shells.  John's death date of 1819 in the list below is inaccurate.

The earliest known burial was that of Elizabeth Shell who was fifty-three at the time of her death in 1848.  This makes her birth date around 1795.  She, most likely, is the reason the Shells began this family burial ground.  John had a relative Isaac whose daughter Elizabeth married into the Richwines who, entering land in 1836, were among the first families to follow John's pioneering example.  Elizabeth married Noah Richwine, son of Gideon Richwine, in 1861.  She died in early 1870 and is interred at the Shell.  The couple had two children Marcellus and Maranus in the intervening years.

Another "first family" into the township is also represented here, the Etchisons.  This large family arrived in Pipe Creek Township around 1832.  Sarah Etchison was Noah Richwine's second wife; they married in late 1870.  Sarah may well be the one listed below as passing away in 1920.  Their young son Charles, who died at one year, is resting here along with the other children of the Richwine, Shell, and Etchison families.

On the 1876 township plat map, a Jacob Shell is shown as owning the land which was first settled by John and which surrounds and helps sequester this cemetery from the public.  It is interesting to note that while this small private graveyard was one of the first in Pipe Creek Township, it was still being used by descendents and friends into the 1920s.