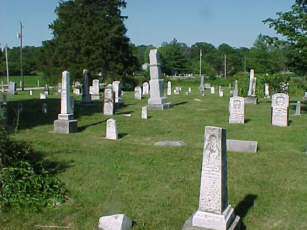 below looking southeast into Madison County

Because the Ridgon Cemetery is on the east-west road that marks the boundary between Madison County and Grant County, this burial ground contains first land owners and settlers from both counties.  The cemetery sits on the south side of CR 1900N.  In the mid and late 19th century nearby on the north side existed a small place of worship named Knox Chapel.  Both the cemetery and the chapel were part of the village of Independence, a small community center started in the 1850s in Madison County.  As the village grew and settlers entered this area--once part of the Miami Indiana Reservation--a post office was needed.  The local post office was named Rigdon, and the little town was referred to by the two names simultaneously.  This is not uncommon in settlement locals.  Furthermore, the cemetery went by all three names at various times: the Independence, the Knox Chapel, and the Rigdon.  The name of "Rigdon" may have won out eventually over the other names for both the village and cemetery because a doctor and family of that surname were one of the first land owners on the north side of the road.   Pryor Rigdon is shown as a first land owner on the southern border of Grant County.  The Rigdon family settled just north of the village and cemetery in 1849.

Levi Hiatt and wife Ann were also first land owners in 1849 in southern Grant County.  However, when the couple passed away, some thirty years later, their relatives, had the couple buried in the nearest cemetery which was in Madison County--the Ridgon.  The Hiatts may have worshipped in Knox Chapel across the road from the cemetery, and that, probably, was the decisive factor as to the location for their graves. Other first land owners in Grant County listed on this cemetery's gravestone transcription record are Josiah Thrasher, James Hamilton, and Daniel Bayless.

Another couple who may very well have attended church at Knox Chapel are the Spergeons, John and Sarah below.  While John's stone, right, is decorated with the same symbol as the Hiatt's above, Sarah's stone, left, has an index finger pointed to the biblical text.  This was a message to 19th century onlookers to seek enlightenment herein.  John died at eighty-two in 1866, and Sarah passed away in 1878 when she was seventy-six. 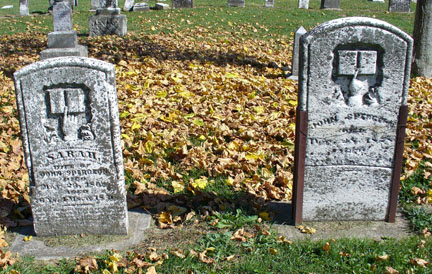 Settlers to the rural farming area, Allen Russell and his wife both died in 1873. Matching markers have always been popular for husband and wife. 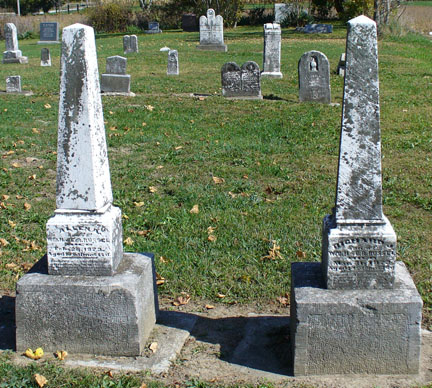 The Kenney/Kinney family is well represented at the Rigdon.  John's stone, left, is a well preserved large tablet.  John died "Nov. 26, 1863 aged 33 years."  In the middle is what is left of a large tablet for Catherine Kenney.  Because the two markers are next to each other and matching in material, size, and font, John and Catherine were probably man and wife.  Right is a later gravestone for "David M. son of J.O. & C. Kinney died July 19, 1876 aged 22y 9m 5d."

Sometimes a family's involvement in an area's development is only evidenced by those they left behind.  Below are the stones for females who are the only representative of a particular surname on the burial list.  Far left is the stone for Mary Butler who died in 1865 when twenty-seven years old.  Center left is the simple marker for Susannah Holladay who passed away in 1860 at twenty six.  Center right, Nancy, wife of Dr. C.E. Riggs, died in 1863 at thirty-two years.  At far right is the well preserved stone for Rhoda, wife of Ephraim Mullen; she died Aug. 4, 1869.  Other members of their families might be buried here now without markers, or perhaps the families moved on.

Below are the grave markers for the children of settlers.  Evidently when the transcription of the Rigdon Cemetery's gravestones was done in mid 20th century, attention was paid to the memorials for adults since all of these, below, have been left off the burial record.  Admittedly many of these are most difficult to read.  At far left, James W. died in 1859; center left, John, son of the Thrashers, died Nov. 12, 185?; center right, a Taylor succumbed in mid 1800s; and far right, John M., son of the Lightfoots, died in 1860.  It should be remembered that the death rate in the 19th century for the young was one out of four increasing often to one out of three.

Above far left, John & Margaret Griffee lost an infant in 1864.  Center left is a unique stone for three children of the same family.  Unfortunately, the soft white marble has eroded so badly that only hints of their names and data can be discerned.  Center right is a marker for two children: Mary and Hester Jones who died in 1876.  By contrast, the stone, far right, for Flora B. can be easily read.  She was the "dau. of G.A. & Lucinda Coleman died Oct. 8, 1876" when two years old.

The gravestones for children are generally smaller in size than those for adults and are often marked with lambs, like the three above, symbolizing innocence.

The earliest graves on the burial record, below, for the Rigdon Cemetery are for Thaddeus Jones who died January 7, 1834, and Joseph Keaton/Keatern who died in 1835 when "58y 1m 26d" old.  This would make Joseph's birth year about 1777--during America's Revolutionary War.

The Rigdon Cemetery was used by residents of both Grant and Madison counties into the early 20th century.