In the 1960s, the Madison County Historical Society was aware of the Kisling Cemeter 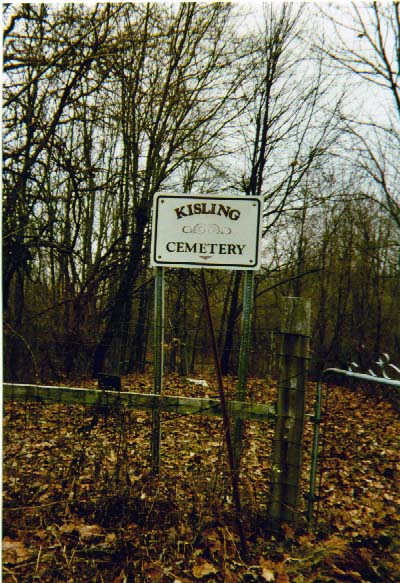 y's existence.  They knew that it was located on Paul and Betty Sander's farm on CR 400S west of 500E in Adams Township, close to the border between Madison and Henry counties.  At that address, the small pioneer graveyard was in the back of the property, on a knoll which over-looked a stream.  One Saturday in October of 1969, the Society's Cemetery Conditions Committee planned a clean-up of the small plot.  They arrived and discovered four early head stones, three from the 1850s and one from the 1840s.  Two of these even had "foot stones."  Foot stones were popular in early and mid 19th century.  These were smaller stones placed, of course, at the foot of the grave to help mark exactly where the body lay.  Whereas the head stone would have the individual's data, the foot stones would have just the initials.  The volunteers recorded the information incised on the stones they discovered:

In reference to this last stone, the Kisling/Keesling family with their collateral branches were a large contingent of early settlers into the border region between southern Madison County and northern Henry County.  Daniel Kisling had purchased land in Adams Township in Madison County in the first third of the 1800s.  Jacob Kisling and his wife Catherine Sheffer, who migrated to the same era as Daniel, settled across the line in northern Henry County.  Jacob and his family members are buried in Henry County's Old Kisling Cemetery in that county's Fall Creek Township.  One of Jacob's sons was the Martin in the above headstone.  So Daniel was the great uncle of little Thomas J.  Other Kisling siblings who settled in the Mechanicsburg area of northern Henry County were George, Peter, and John.  The patriarch John Sr. is also interred in that county.

Little Thomas J.'s mother's maiden name was Fleming, and this may be the reason why Madison County's Kisling Cemetery is also referred to as the Fleming: Sussanah's relation at some point owned the land.  However, the older name for the graveyard is Kisling suggesting that the Flemings purchased the land after the burial ground was begun by a member of the Kisling family.

Farther north into Madison County is a larger Keesling Cemetery in Union Township still serving the community. One of its earliest stones is for Susan Kisling who died at twenty years in 1859.  A John, Robert, Adam, and Samuel Kesling (Keesling) are also recorded by historian Samuel Harden as early settlers in both Adams and Union townships.

Kisling/Keesling descendent Scott Manwaring of Madison County explains that Kisling brothers immigrated to the states in 1749 aboard the ship Fane.  The family remained close as they began lives in the new world.  Eventually descendents lived in the areas of Preble County, Ohio, and Wayne County, Indiana.  From there, members moved into east-central Indiana--Madison and Henry counties.  Evidently, the Kislings/Keeslings are still very close, for Scott reported that the family's 2005 reunion was quite a success.  The 2006 get-together was scheduled for August 5th at the Smith Building in Memorial Park in New Castle in Henry County.  It marks the family's 102nd consecutive reunion!

Except for the inscriptions highlighted above, no formal burial list was ever recorded for this cemetery.