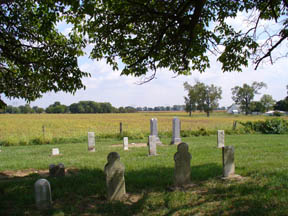 , 1808-1878, is interred here on the property he settled and developed.  The captain was from Ohio and came to the township in 1844-5. He built the first tannery which was in section 21.  For the Mexican War in the late 1840s, Capt. Nicholson recruited and trained volunteers, but the conflict was over before their services were required.  During the Civil War, William Nicholson was still an involved military leader, acting as captain of a company of state militia whi 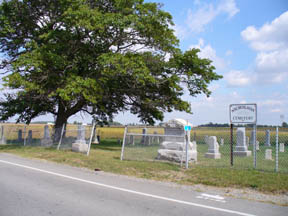 ch helped guard Indiana from the Confederate Captain Morgan and his raiders.  There are eleven other members of the Nicholson family buried here with the captain, and an "S. Nicholson" is shown as owning the surrounding acreage on the 1876 plat map for the township.

Other settlers, born in the first decades of the 19th century, buried here are Samuel Nicholson, a relative, who died seventy-four years old in 1887, Nathan Wilson who was sixty-two when he died 1865, Jacob Ferguson who was seventy-nine in 1894, and Enoch Frey who died in 1899 at seventy-six years.

Since the cemetery is on the east side of SR 13, it is very visible to the public and it retains many of its original headstones.