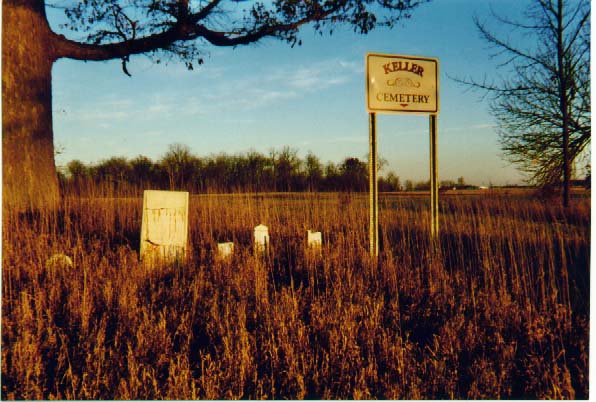 John Keller, an enterprising settler in 1856, tried to take advantage of the Pan Handle Railroad going through Lafayette Township.  John started Keller Station in the southwest quarter of section 15, a mile and a half northwest of present-day Florida Station.   Just east of his enterprise, a graveyard was begun for local farming residents.  Alexander Bodkins, the first of the names below, is listed by historian Samuel Harden as one of the pioneers to Lafayette Township.  While Alexander's birth and death dates were not discernable at the time of transcription, the fact that he is listed as a pioneer indicates a general time frame for his life span.  The township was opened in 1831, which means Alexander, as a mature adult, would have entered land shortly after that year.  Alexander is buried here along with five members of his family.  A pioneer to neighboring Duck Creek Township, Robert Stewart, who died March 24, 1862, at "54y 3m 19d," is also resting here along with his wife Mary and a R.A. Stewart.

Found at the Madison County Historical Society in June of 2012, a page of handwritten notes, dated June 9, 1987, gives a few more details concerning the gravestones at this cemetery.  At some point in the last half of the 20th century four of the stones, all broken, were stored in the barn near the cemetery site.  These and other markers discovered in the cemetery must have been reset, as pictured above, after the 1987 date.  One of these stones was preserved well enough that the traditional poem at the bottom could be transcribed:

But by our Savior's province given

We hope to meet thee

The bottom half of a second stone had the remnant of this poem incised:

The house I seek is far away

Where Christ is not, I cannot be

While the Keller Station did not last very long, the small Keller Cemetery was used until 1914.