Boone Township in north-central Madison County is comprised of large expanses of farm land.  The village of Rigdon is in the extreme northwest cor 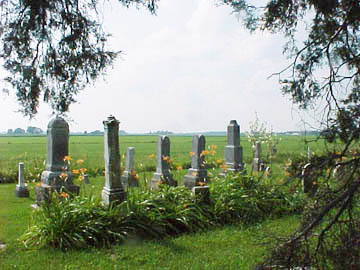 ner, but other than that, there are no other communities or civic centers.  The tree-lined fields, unimpeded by cities and towns, gradually rise to a geographic high point in section 21.  Here with only three or four houses in sight, the Forrestville Cemetery has a commanding view of the beauty of the surrounding Hoosier landscape.

There used to be a Forrestville hamlet.  It and its cemetery were laid out in 1850 by pioneer settler Rev. John W. Forrest on land which he owned and donated.  Forrestville had several houses, a church, and general store, but the hamlet existed for a very short time.  In spite of the disappearance of the buildings,  Forrestville Cemetery continued to be used by the neighboring farmers and the members of the reverend's Baptist Church which he organized in 1853.  Once again, Rev. Forrest had donated the ground for the house of worship.  Later, in 1860, Forrest also gave the township a piece of land for a new school next to the church.

The 1876 plat map for Boone Township shows only the cemetery on CR 1650N, sheltered on three sides by Rev. Forrest's 160 acres; there is not even a hint of Forrestville, the hamlet.  The Baptist Church and school house #5 are seen in the northeast corner of the Forrest property with the north-south road having to angle around them.  The Forrest home is designated as being back a long lane off of CR 450E.  The Forrest farm with house, barns, fields, and woods is pictured on page 97 in the 1880 History of Madison County, Indiana.

"...[Forrest] was born in Virginia in December 1810 and...arrived in that part of the county when it was quite new.  There were no roads, no mill, the few first years after his arrival there.  Mr. F. was blessed with a strong constitution, well fitted for pioneer life; one spring he was at no less than twenty-six log rollings, which required no small amount of physical ability. He has been a member and minister of the Baptist Church for many years... He served twelve years as Justice of the Peace, and acted as Swamp Land Commissioner, and is, at this writing, a candidate for the Legislature on the Grange ticket.  He has always taken a strong temperance stand...and was the first Postmaster in the township... In person, he is rather under medium size, heavy built, low forehead, heavy eyebrows, and in height about five feet seven inches...  As a public speaker Mr. F. can not be said to be eloquent, yet he is listened to with attention...as a minister."

The very first settler to this township is also buried at the Forrestville.  Wright Smith was born in 1798 in Virginia.  He, along with his wife Lydia and six children, came in 1835.  Other than his farming enterprises, Wright Smith helped organize in 1851 one of the first churches in the township, the Methodist Episcopal.  Smith was elected class leader and erected a house of worship for the congregation at his own expense.  He also served as superintendent of the church's Sunday school, a position he held for ten years until his death in 1863.  Wright Smith was described by county historian Samuel Harden as "tall, slim, with dark complexion and dark hair... He was on the right side of all moral questions.  His memory should be kept green for the sterling qualities and noble ambition, which were characteristic of the man."

Following closely behind the Smiths were the Hiatts.  A William Hiatt is listed among first land owners for Boone Township.  The patriarch of the family, also named William, died in 1839 at "71y 10m 9d" according to the burial list.  That would make his birth year about 1768--before the Revolutionary War.  A second William, possibly a son, died in 1858 at thirty-three years of age; an Eli Hiatt also passed away in that year.  Like the Forrests, the Hiatts have many descendants living still in the county.

Eli, left, and William, right, both have replacement monuments erected by their descendants.  The stone type, size, and design are from the late 19th or early 20th century.  Jasper's stone, middle, is the soft white marble tablet used in the 1850s.

Another first family were the Sebrells.  Benjamin H. and Morgan Sebrell are listed by 19th century Madison County historian Samuel Harden as first land owners along with the Greenlees, McMahans, Fenimores, and Moores, etc.

The Sebrells have attractive, legible stones representing their contribution.  Owen, left, and his wife Emelia, middle, each have a hand holding a bible within a cartouche.  The hand with bible symbolized their religious faith.  The stones' design of the pointed arch suggested the arched windows of many churches during the last half of the 19th century.  At right, Benjamin and wife Elizabeth's memorial is also symbolic.  The single base with two pillars topped by a connecting arch represented their marriage as one unit.  The clasped hands at the top of the arch also symbolized their partnership.  This example is surmounted by a decorative finial.

Above are tablets of different shapes.  At far left is the stone for George J. Peters who died at three years of age "Jan. 4, 1866."  David Metcalf's stone, center left, says that he died "Sept. 1862."  The hand with index finger pointing up illustrated that David's soul was going to heaven.  Center right is a stone for a member of the Owen family.  Unfortunately, the specific data etched into the soft stone has faded from erosion.  At far right, the tapered tablet for Elizabeth states that she was the "wife of Moses Moore died Jan. 21, 1866 aged 21y 6m 20d."  A traditional verse at the bottom has been weathered away.

Three dimensional markers became the fashion in the last third of the 19th century.  One popular design was the obelisk which represented the spiritual connection between heaven and earth.  At far left, this faded pillar represents the only person with the Wright surname on record as buried at this location: William Wright died in 1885 when seventeen.  Center left is an almost identical stone for "Virginia C. wife of John Beckley died Apr 7, 1879 aged 35y 11m 22d."  Center right is a well preserved obelisk on base and foundation.  A monument of this design was often set at the center of graves with each side of the base recording who was buried at that spot.  On the south face is Susan Greenlee, who died in 1873 at ninety-eight years of age.  She would have been born during the Revolutionary War.  On the east face Eddie L. Greenlee is recorded as passing away in 1875 when nineteen.  At far right is a shorter obelisk on base and small foundation.  This is for "Hannah G. wife of R.E. Rohrer" who died at forty-nine in 1882.

For the families who wanted the stones for their departed to testify to religious faith, the "podium" was a popular choice.  A short rectangular column was covered with a stone drape, often with tassels and fringe.  The book on top was the bible.  Like the obelisk, the podium was often placed between or at the center of graves, and each side gave the data for individual family member.  James and wife Amanda Ross's gravestone is left.  The scrolled medallion on the front has the family name.  The right side, as one is facing the stone, gives the husband's statistics; the left has the wife's.  David Jones, another one born in the 1700s, is memorialized, center.  He was born around 1785; he died in 1867 at eighty-two years of age.  There are eighteen of that surname on the burial list.  At right, a daughter of the McGraw family, Annie, died in 1876.  This grave marker, by some oversight, was omitted during the transcription.

Rather than depicting a recognizable form, some three dimensional stones were essentially architectural in design such as these blocks below.  The small square block at far left has a cornice on top and weathered data.  Center left, Elizabeth Minch, who died in her nineties in the 1890s, has a plain pillar with a bible.  At far right is another short pillar, the top of which has pointed arches.  At center right is the same design but with the addition of an urn.  The urn symbolized a productive life.

The Forrestville Cemetery continues to be used by local residents and descendants of settlers, and the land rises to a geographic high point beyond the entrance of the cemetery.