Location: in field at northeast corner of the intersection of CR 800S and CR 300E 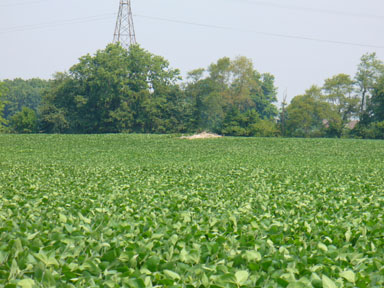 From CR 800S looking into the field in the northeast corner at the intersection with CR 300E, the small Evans family burial site looks like a dry, beige smudge in a painting of green soybeans and trees.

Samuel Harden in his history of Madison County, The Pioneers, lists "Jacob Evans and family" as among the first settlers to Adams Township.  The 1880 History of Madison County, produced by Kingman Brothers, adds that in 1834 "Jacob Evans from Wayne County, Ind., settled on the farm now owned by his sons, Robert, John, and James."  As was the custom and necessity of the time, the family farm contained the family graveyard, and this private burial ground is unique in that it remained private.  Just three burials are listed below, all three Evans family members who died before the Civil War.  Jacob, 1786-1860, the family's father and Hoosier pioneer, was the last of the three to be interred in the ground he tended.  His daughter Nancy, 1824-1840, was the first to be buried here on April 13th.  His wife Margaret, 1790-1840, died only ten days later, demonstrating how fragile and uncertain was life for people settling a frontier. Secluded by space and time, the Evans Cemetery acquired no other recorded burials.

On June 17, 1968, members of the Cemetery Conditions Committee of the Madison County Historical Society--Helen and Troy Tyson, W. Lloyd Scott, Martha and Toney Haines--recorded the information discovered on the gravestones then over one hundred years old.  All three markers were broken, but Ms. Tyson made note that the stones appeared to have been cut at the same time, by the same hand, and with the same design.  She also took the black and white snapshots shown here.  Perhaps one of Jacob and Margaret's sons had all three stones made at the time of Jacob's death when the land would have been passed down to the next generation.  Whoever was responsible in the 19th century helped individuals from the 20th century preserve a piece of family and pioneer history.

(It would be nice to know who the kids are shading themselves under the weeds in the first picture.)