Revitalized in the 21st century, the Duck Creek Cemetery was originally named for its location: a hill along a tributary of White River, Duck Creek.  Like many other pioneer graveyards, it goes by various other titles in Madison County records as given to it down through the generations: Carr, Ray, Roys, Tranbarger, and Frazier.  The Madison County Cemetery Commission likes to label the cemeteries by their earliest known appellation, so this one is referenced as the Duck Creek Cemetery.

In the mid 20th century, the Duck Creek Cemetery fell upon hard times.  Several local residents began using this hidden site as a dumping ground for their trash.  Garbage, old fence, unwanted lumber, metal scraps, and debris were hauled in and pushed over the east side of the cemetery's hill along with a dozen stones that the vandals evidently considered in their way.  To dissuade this criminal activity, the township trustee erected a stout fence and a metal gate with padlocks.  The gate was partially destroyed when the locals wanted access to their private dumping ground.  This vandalism and illegal dumping were halted when authorities retrieved from the debris personal papers and receipts which included the names and address of the perpetrators.

In the early 21st century, circumstances vastly improved for this pioneer cemetery.  Developers purchased the surrounding wooded acreage for a housing division and an extension of Elwood's Cattails Golf Course.  The cemetery would be surrounded then by the latter and become a landscape feature along the paved cart path connecting tees 5, 6, and 7.

Beginning in late 2006, the Madison County Cemetery Commission coordinated renovation efforts with the Duck Creek Township trustee and golf course owners.  Plans were made to clean the heavily overgrown boundary, reset existing stones, and add a decorative fence, gate, and sign.  Golf course owners contributed a small drive and parking area for cemetery visitors.  Now instead of being abused with refuse, the Duck Creek Cemetery will be well cared for and appreciated by residential neighbors and the golfing public.

At left is some of the debris still littering the east side of Duck Creek Cemetery's hill.  A cart path for the Cattails Golf Course can be seen in the background.  At right is contractor Larry Brown having inspected some of the stones and foundations that vandals pushed over the side of the hill into the junk.  Larry was in charge of cleaning the fence row and the interior brush and resetting the stones.  In the far background the cleared area will lead into the new housing subdivision.  The picture below shows Larry's efforts: the now visible countryside, the reset stones, and painted iron supports.

Conditions continued to improve for this once deplorable graveyard.  In the spring of 2007, the MCCC hired Tim Moore of Graveyard Guardians from Noblesville, Indiana, to professionally clean the reset stones.  The results were amazing.  Beautiful, detailed carving began to appear from under decades of grime, black mold and mildew.

The Tranbarger stone is discolored to black at left; the white showing through is the result of scraping at the build-up.  At right is the same stone after Graveyard Guardians worked their magic. 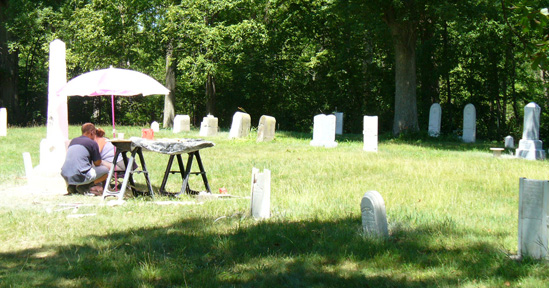 Tim and assistant discuss what is needed to help the rediscovered column for the now tallest marker in the cemetery, the Jane Starkey monument.  She died March 1, 1861, at "68 yrs 4m 15d."  Vandals had used the top of her tall grave marker for their shotgun target practice.  The top half of the obelisk was then broken off and thrown in a pile of debris at the cemetery's edge. 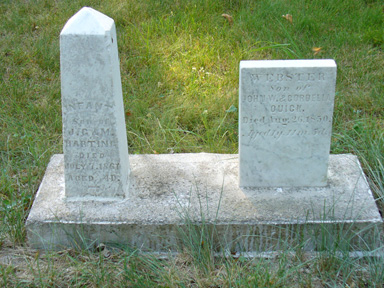 An interesting story is represented by the picture above.  At some point in the 20th century, these two stones were stolen from the Duck Creek Cemetery.  Decades later, new owners of a garage in Elwood were tearing through the plaster and discovered the stones between the studding: a small tablet for one year old Webster Quick, who died in 1850, right, and a small column for an infant son of the Hartings, who died at only four days old, left.  The new owners called the cemetery commission and returned the grave markers.  The stones were re-erected in new concrete in the middle of the cemetery.  The Hartings had lost a total of six children between 1861 and 1867.  All of them were buried with little columns, like the one above, in their own section behind two trees in the southeast corner of the graveyard.  At the time of the reset, the columns could not be read because of the black mold buildup, and so commissioners did not realize that the little column belonged with its fellows pictured below. 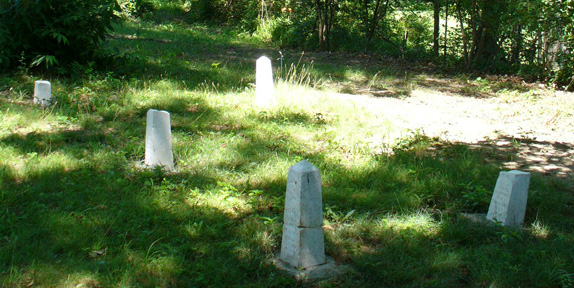 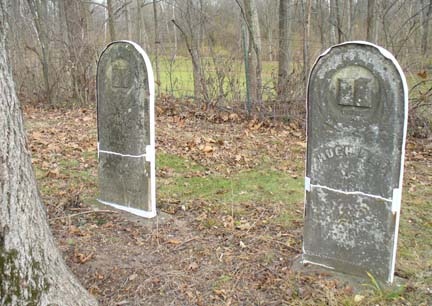 While discolored in the picture above, Hugh and wife Catherine Ray's stones are still remarkably intact maybe because they are at the back of the cemetery and shielded behind a tree.  Hugh, 1787-1844, and Catherine, 1794-1861, came to Pipe Creek Township in 1836 from Virginia.  The Rays lost daughter Malinda in 1840.  Her death may be the reason the Rays began this cemetery.  Only four years later Hugh, himself, died.

Traveling with the Ray family were the Tranbargers, husband Jacob, 1802-1849,and wife Sarah, 1807-1883.  Families that migrated together settled near each other for security and support.  The first family to have a member die would begin a cemetery customarily offered for use to the surrounding neighbors. It is not surprising then that when Jacob died five years after Hugh, Jacob would be interred here.  Both the Ray and Tranbarger names identify this cemetery in pioneer cemetery archives.

Hugh and Catherine Ray's stones are pictured below after Tim Moore of Graveyard Guardians finished cleaning them.