The Collier Cemetery rests on land donated by its namesake, early settler Rev. J.F. Collier.  James Foster Collier was born in Kentucky in 1801, the son of Meshach and Rebecca Collier.  Meshach and Rebecca are buried at the MacAllister Cemetery.  Their son J.F. became a member of the Baptist church when he was twenty-one.  He later served as a very popular and influential minister for this denomination.  J.F. Collier married Mary, born 1789, in 1822, and the Collier family arrived in Adams Township, probably from Lawrence County, Ohio, in the early 1830s. Soon afterward James and Mary lost their fourteen year old son Amos. The first burial at the Collier Cemetery was Amos.    Jame's wife Mary died in 1849 and is listed below.  In 1852, J. F. married Margaret Surber, born c. 1832, who died in 1928, lived to be "96y 1m 29 d," and is also listed below along with James F.*

The cemetery was, quite naturally, tied to the Union Baptist Church started and led by Rev. Collier.  As a pastor, historian Samuel Harden states that Rev. Collier was "a strictly moral and upright man...[having] preached more sermons, joined more in marriage, and administrated immersion to more candidates than any man of whom we may write."  In 1834, the membership of the Union Baptist Church was only thirteen.  However, with Collier in the pulpit, the congregation continued to grow, requiring that larger houses of worship be built in 1852 and 1872.  The land for both new buildings was donated by Rev. Collier.  The Collier Cemetery, therefore, holds not only the family and friends of the pastor but also many of the congregation's faithful.   Rev. J.F. Collier continued "in a pastoral relation" in the governing body of the church until his own death in 1881.  The cemetery he started continued to be used into the first half of the twentieth century.

Family genealogist Leslie Christian explains that the Colliers and the Hankinses, also listed below, intermarried, which is often the case for families of the 19th century living near and migrating with each other.  The Susannah Hankins, who is recorded as passing away in 1887, was a Collier by birth, and her widowed husband married a Brumfield.  This Collier-Hankins couple was just one of several who moved from the Lawrence County, Ohio, area to Madison and Hancock counties in Indiana before 1840.  The Hankins family were originally from Virginia and were also members of the Baptist movement.   They migrated to Ohio with fellow church members who helped found the Ohio Baptist Association in southern Ohio in 1820.  There they must have settled near the Colliers.  Ms. Christian adds that the surname Collier is spelled "Colyer" in some very old documents.  The larger Collier-Hankins family was, therefore, melded by proximity, marriage, and faith. 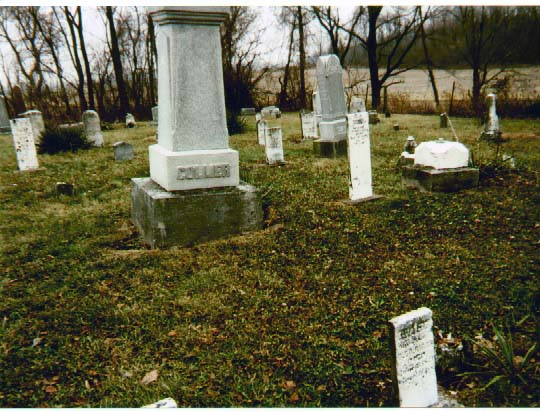 Many of the cemetery's stones, including the large one for J.F. Collier, above, show the recent resetting by the dedicated historians and genealogists of Madison County.