Family genealogist Harriet Hiday Miller in Salem, Oregon, has cleared up a misconception.  The original Hiday pioneer cemetery was thought to have been completely destroyed when improvements to a county road and adjacent bridge were made in 1916.  Supposedly, at that time, all of the cemetery's graves, including Jacob Hiday, 1823-1902, son of Henry and grandson of pioneer Jacob, had been moved to Gravel Lawn Cemetery.  This modern burial ground, which started around the turn of the 20th century, was developed on farm land settled by the Hiday family.  Evidently, removal of all the graves from the old to the new was incomplete. Harriet Miller informed the MCCC that her cousin David Hiday had searched for and found remnants of the original Hiday plot in 1987 and had, at that time, taken pictures.  Other relatives Don and Linda Hiday had visited the original Hiday site in 1993 and had also taken pictures.  The Hiday pioneer cemetery is located as described above, and Harriet states that the gravestone of Henry Hiday, 1797-1873, is still there as well as several others.

The three stones, photographed above by Don Hiday in 1993, should have been removed along with the other stones and graves in 1916.  Henry Hiday's stone, in the middle, is remarkably legible showing name, dates, and the anvil, the tool of trade for a blacksmith.  Henry actually signed up as a light horseman for the War of 1812 but was not called to serve.  The stones of sixteen year old Jesse, on the left, and "infant son of C. & E.L. Hiday," on the right, were likewise left behind, resting now in the undergrowth.

The Hidays rival other pioneer families--that of Rogers, Dilts, and Fisher--for being the first into the Madison County area of the New Purchase.  Certainly by 1820, according to the Green Township census for that year, and possibly as early as 1818, according to one history, Dr. Jacob B. Hiday brought his family from Ohio to settle land along the banks of Lick Creek.  Dr. Hiday was born about 1765, and a family story says that he was brought over to America from Germany as a child.  In Germany the family name was spelled "Heyde."  The Hidays may have resided for a time in Highland County, Virginia, since there was a contingent of German immigrant families living there which included Heydes.   As a young man, Jacob studied to be an herbal doctor, which was the type of medicine used at that time, very likely at Heidelberg, Virginia, the namesake of the German city.   In 1790, Dr. Hiday married Sarah Fruit, the daughter of George and Margaret Fruit/s.

Dr. Hiday must have been an adventurous individual since he is later found on various tax records throughout the Northwest Territory.  In 1795, he is in Mason County, Kentucky; in 1799 and 1800 in Fleming County, Kentucky; in 1806 in Butler County, Ohio; and in 1809 the Whitewater area, Franklin County, of the Indiana Territory.  Finally, Jacob, wife Sarah, and their branch of the Hiday family put down roots in Madison County, Indiana.  Jacob and Sarah's children are listed as Catharine, Henry, Susan, and Mary. They and grandson Thomas, who migrated with the family, saw Jacob build the first shelter in Green Township, a log cabin on the south side of Lick Creek.  The 1880 History of Madison County, Indiana praises Jacob:

"The elder Hiday was a man of strong character and physique, and was well qualified for the position of leader of this pioneer community.  He was one of the early Justices of the Peace, and was the prime mover on many of the improvements instituted in the township."

Dr. Jacob B. Hiday, herbal physician, pioneer, and community leader, died about 1842.  He and his wife are believed to be still interred in unmarked graves at the original Hiday family burial ground. (For more on the Hidays, go to the Green Township history page.) 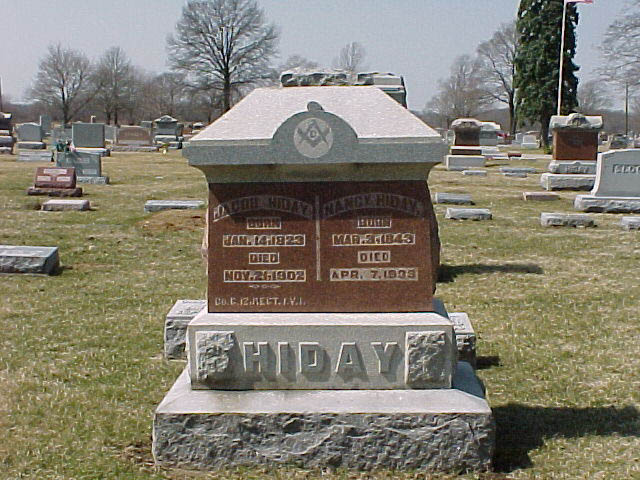 whose stone is pictured above, married Mary Wynne whose family had settled across the county line.  Henry and Mary had ten children.  The five boys all served in the Civil War, survived, and were able to return to their Madison County homes.  Jacob, 1823-1902, who is mentioned above and whose stone is at right, Joseph, 1830-1902, and Archibald, 1837-1922, are all buried at Gravel Lawn. John Henry, 1825-1886, is buried just south of the homestead at the Wynne Cemetery in Hancock County.

The fifth son is Thomas Hiday, 1828-1908.  He is shown as owning the homestead on the 1876 plat map for the township.  The homestead by this time extended to land on either side of Lick Creek.  The Dotys, Cottrells, and Nicholsons--descendents of families who followed the Hidays into the area--are Thomas's neighbors.  Thomas, in fact, married Sarah Jane Doty.  Thomas and Jane's mid-century brick house is located along the old Indiana Highway, now known as Reformatory Road, where it crosses SR 13.  (For a picture, go to the Green Township history page.)  The house is the residence for the Gravel Lawn superintendent and is nicely maintained.  It actually sits along the side of the newer cemetery where Thomas and Sarah are buried.  At least, Hiday family members, whether in the old family plot or the newer cemetery, rest in the land they settled and nurtured.

As was the necessity of the time, pioneer families buried their dead on their property, usually choosing high ground in a remote location.  Once a cemetery plot was started, neighbors and other settlers in the broader farming community would utilize the already hallowed ground.  The list below of the stones left at the original Hiday family graveyard is compiled from the information sent by Hiday descendents.  The MCCC will be investigating the legal status of this pioneer cemetery.